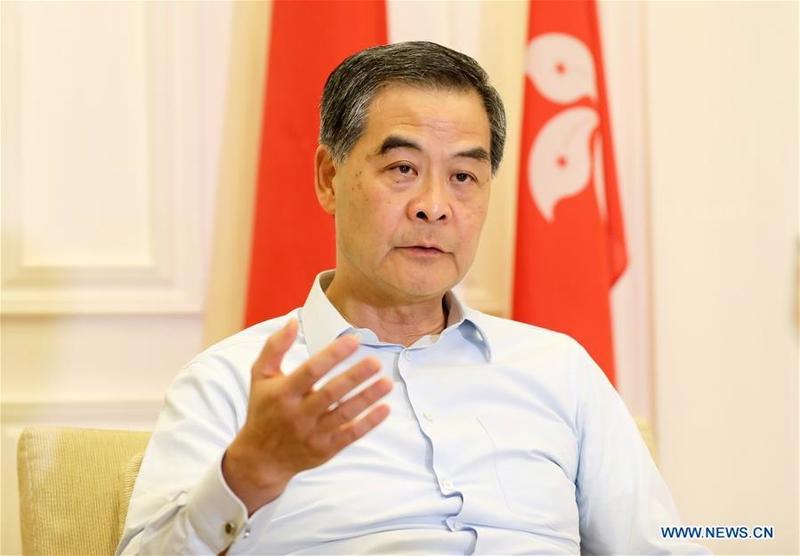 BEIJING - The West should abandon its prejudice and fully understand the nature of Hong Kong's democracy, Leung Chun-ying, a former top administrative official of the Hong Kong Special Administrative Region (HKSAR), said in an exclusive interview with Xinhua on the sidelines of China's annual legislative session.

Hong Kong, being a special administrative region of China, is a city, not a state, said Leung, countering some Western attacks on the move of China's top legislature to consider improvements to Hong Kong's electoral system.

Therefore, when there are problems and loopholes found in the system, it is completely legitimate, just and reasonable for the NPC to improve the system, said Leung

A draft decision on improving the electoral system of the HKSAR is being deliberated at the ongoing session of the National People's Congress (NPC).

The power of Hong Kong is entrusted by the central authorities, and the chief executive and other principal officials of the HKSAR are all appointed by the central authorities, said Leung, who served as the chief executive of the HKSAR from 2012 to 2017 and is now vice chairman of the National Committee of the Chinese People's Political Consultative Conference.

READ MORE: HK back on its feet after protests, COVID-19

The current political structure of the HKSAR, including the electoral system, was designed by the NPC during the formation of the Basic Law, said Leung.

Therefore, when there are problems and loopholes found in the system, it is completely legitimate, just and reasonable for the NPC to improve the system, said Leung.

Only by improving the system and ensuring "patriots are administering Hong Kong" can Hong Kong fully embrace long-term peace and stability, he said.

Administration by patriots is an international practice, which is only natural and normal and applies to any country and any society in the world, said Leung.

"I believe that with an improved electoral system, we will be able to exclude those unpatriotic people from the governance structure of the HKSAR."

Under the premise of "patriots administering Hong Kong," there will still be different opinions in Hong Kong society, which may criticize the policies of the HKSAR government and oppose certain motions. But there will be nothing like the "burn with us" strategy and the attempts to paralyze the entire HKSAR government, said Leung.

It is utterly important to better explain the reasons, necessity and urgency of improving the electoral system of the HKSAR to the Hong Kong people and improve the publicity of the work, Leung pointed out.

"I'm confident and optimistic. With the implementation of the Law on Safeguarding National Security in the HKSAR and the improvement of the electoral system, Hong Kong will enjoy a normal and stable environment for future development," Leung said.