1 killed as farmers ride into New Delhi on Republic Day 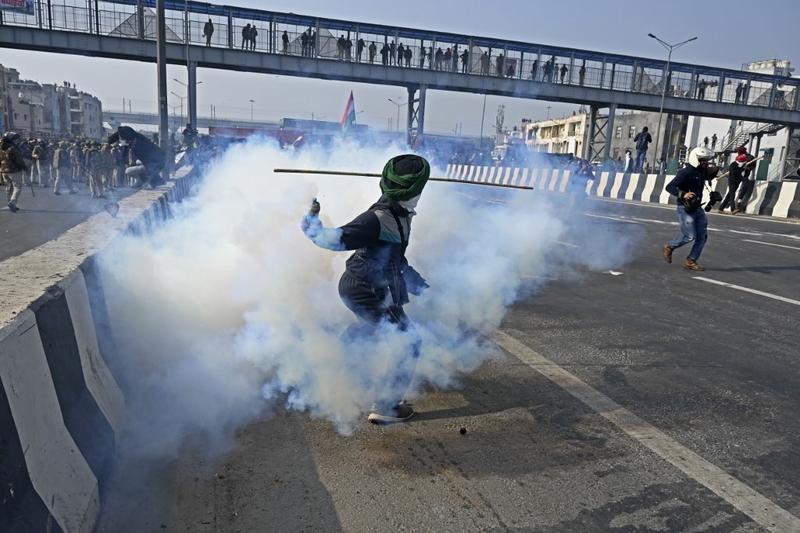 A farmer throws back a tear gas shell towards police during a tractor rally as farmers continue to protest against the central government's recent agricultural reforms in New Delhi on Jan 26, 2021. (SAJJAD HUSSAIN / AFP)

NEW DELHI - One person was killed as protesting farmers Tuesday marched in huge numbers and drove their tractors inside the Indian capital city to stage protests against the three farm laws, officials said.

According to the police, a farmer was killed after his tractor overturned. However, the framers alleged the farmer lost control over his vehicle after a tear smoke shell exploded near him.

According to the police, farmer was killed after his tractor overturned. However, the framers alleged the farmer lost control over his vehicle after a tear smoke shell exploded near him

On Tuesday thousands of farmers forced their way into the capital city, breaking barricades, triggering police action. Police fired dozens of tear smoke shells and resorted to baton charging to stop protesting farmers but with little success. Fierce clashes were witnessed at several places in the capital city.

The farmers entered the iconic Red Fort and hoisted flags.

Authorities suspended traffic on some routes and closed the metro station in wake of the farmers' rally. Even mobile internet services were suspended in parts of Delhi in wake of the deteriorating situation.

The protests and violence broke out on the day India celebrated its 72nd Republic Day.

Farmers have been striking for the past two months at borders of Delhi, demanding a complete repeal of federal government's three new farm laws.

Indian Prime Minister Narendra Modi has been defending the three laws, ever since the protest broke out.

His ministers talking to the agitating farmers have offered to put the three laws on hold, but farmers insisted on a repeal.

Eleven rounds of talks between protesting farmers and the federal government have failed to end the ongoing stalemate.