Indian farmers ride into capital ahead of Republic Day 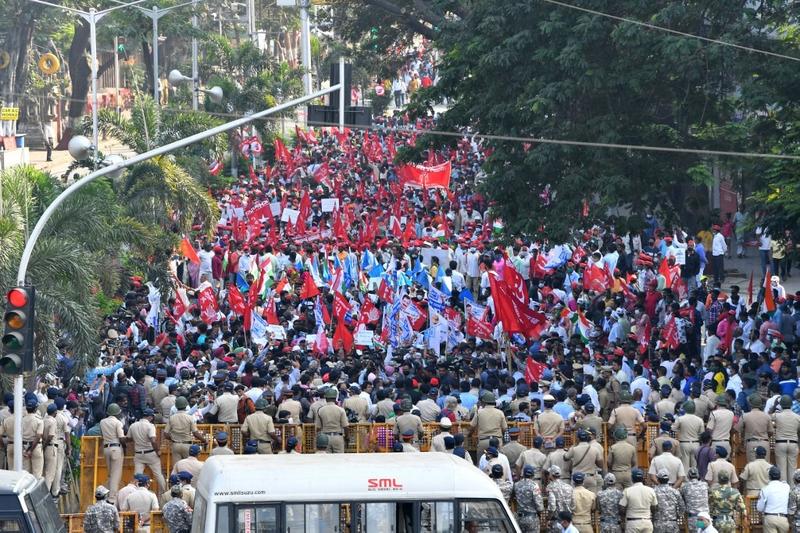 Farmers are being stopped by police during a rally in support of the ongoing farmers protest against the central government's recent agricultural reforms in Mumbai on Jan 25, 2021. (INDRANIL  MUKHERJEE / AFP)

NEW DELHI - Caravans of tractors clogged a key highway in northern India on Monday as tens of thousands of farmers protesting against agriculture reforms streamed into the capital ahead of celebrations for Republic Day.

India marks its founding as a republic on Tuesday with a military parade in the historic city centre, but the farmers, who are demanding a rollback of Prime Minister Narendra Modi’s deregulation effort, plan their own peaceful show of strength.

India marks its founding as a republic on Tuesday with a military parade in the historic city centre, but the farmers, who are demanding a rollback of Prime Minister Narendra Modi’s deregulation effort, plan their own peaceful show of strength

“We will teach Modi a lesson that he will never forget,” said one of the protesters, from the district of Ludhiana in Punjab, who drove his own tractor. The 35-year-old, who cultivates 10 acres, asked not to be identified.

Loudspeakers blared anti-government songs as the lengthy procession of vehicles rolled down National Highway 44, accompanied by dozens of community kitchens to hand out hot meals and beverages in the winter cold.

Farmers mainly drawn from the breadbasket states of Punjab and adjoining Haryana have blockaded approaches into New Delhi for about two months to protest against three new farm laws they say will hurt their livelihoods and help big companies.

Their unions are pushing for repeal of the laws, after rejecting a government proposal to suspend the measures it says will usher in much-needed steps to boost farmer incomes.

Several rounds of talks with Modi’s government have made little headway, and protesters now aim to up the ante with the procession set to follow Tuesday’s military parade.

At the weekend, police said they would allow at least 12,000 tractors to traverse a 100-km stretch around the capital, despite some intelligence warnings of possible efforts to disrupt the farmers’ peaceful rally.

A farmers’ group exhorted its members to refrain from violence in detailed instructions issued for Tuesday’s event.

“Remember, our aim is not to conquer Delhi, but to win over the hearts of the people of this county,” it said.

In the western state of Maharashtra, thousands of farmers were also on the move, flocking to a flag-hoisting ceremony on Tuesday in the heart of Mumbai, India’s financial capital.

“We are here to support farmers in Delhi, to highlight that farmers across the country are against the farm laws,” said Ashok Dhawale, a state protest leader.