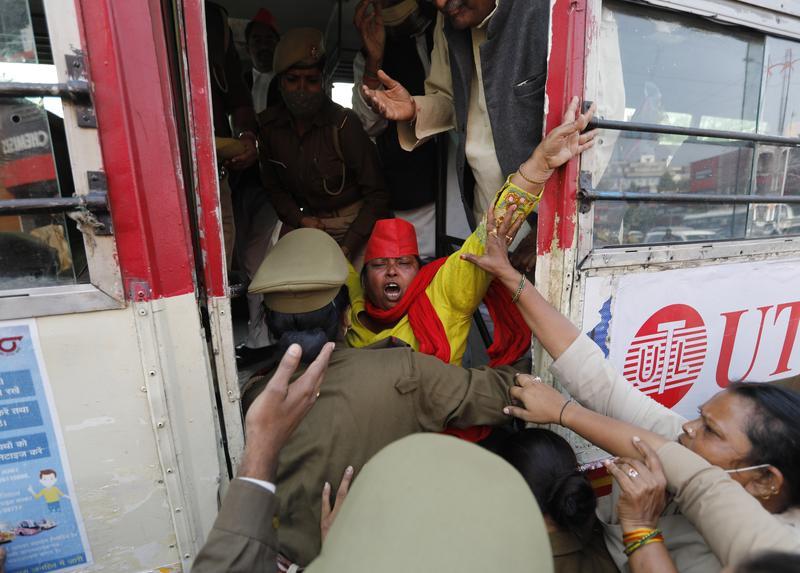 A Samajwadi Party supporter shouts slogans as she is detained by police for trying to enforce a nationwide farmers' strike in Prayagraj, Dec 8, 2020. (PHOTO / AP)

In eastern and western states, farmers blocked roads and squatted on railway tracks, delaying hordes of people getting to work, and preventing perishable produce from reaching markets.

Farmers from the northern states of Punjab and Haryana, neighboring New Delhi, have been at the vanguard of the agitation since last month, and have set up protest camps in and around the capital.

“We will not allow the government to change the rules because they want to hurt farmers’ income by filling the pockets of big companies,” said Gurwinder Singh, a 66-year-old farmer from Punjab, a state known as the food bowl of India.

The ruling Bharatiya Janata Party (BJP) has said the reforms would not hurt farmers’ incomes. More talks between the government and farmer organisations are due on Wednesday

The reforms enacted in September loosened rules around the sale, pricing and storage of farm produce that have protected farmers from an unfettered free market for decades.

Assured of floor prices, most currently sell the bulk of their produce at government-controlled wholesale markets, known as mandis.

The ruling Bharatiya Janata Party (BJP) has said the reforms would not hurt farmers’ incomes. More talks between the government and farmer organisations are due on Wednesday.

Meantime, social media has fanned sympathy for the farmers’ cause among the Indian diaspora abroad. During recent days, thousands of people have protested in support of the farmers outside the Indian embassy in central London.

Amid the coronavirus pandemic, protest sites around New Delhi have turned into camps, with entire families cooking and sleeping in the open and Sikh religious organisations were providing them with face masks, water and food.

At least 20 regional and national opposition parties backed the call for the strike.

“It’s going to be nightmare if there will be any serious unrest during the pandemic,” a senior home ministry bureaucrat overseeing security told Reuters on condition of anonymity, warning that police had been authorised to use water cannons or tear gas to disperse over-crowded protests.