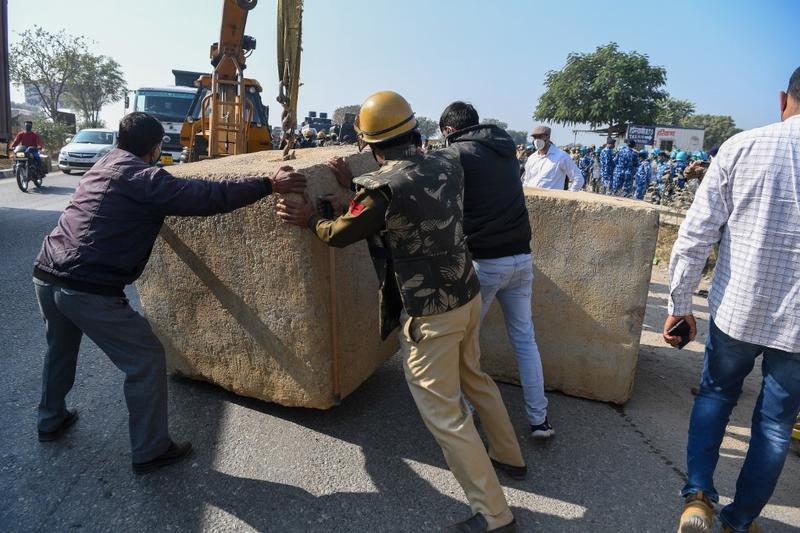 Police personnel block a highway with concrete boulders on the Haryana-Rajasthan border to stop farmers from joining protests in Delhi against the central government's recent agricultural reforms, in Rewari district on December 13, 2020. (PRAKASH SINGH / AFP)

Six rounds of talks between government officials and farmer union leaders have failed to resolve the challenge faced by Modi’s government.

ALSO READ: India may amend farm reform in the hope of ending protests

“Hundreds of farmers will launch a tractor trolley march to New Delhi to voice our grievances against the new laws,” said Kamal Preet Singh Pannu, a leader of Sanyukta Kisan Andolan (United Farmers’ Protest), one of 30 groups against the laws.

“Government wants to discredit and crush our movement, but we will continue to protest peacefully,” Pannu said.

Local authorities increased security measures, deploying police and putting up barricades to prevent farmers from entering New Delhi in large numbers. Opposition parties and some senior economists have lent support to the protests.

“I’ve now studied India’s new farm bills & realize they are flawed and will be detrimental to farmers,” Kaushik Basu, a former chief economic adviser to the federal government, wrote on Twitter.

“Our agriculture regulation needs change, but the new laws will end up serving corporate interests more than farmers. Hats off to the sensibility & moral strength of India’s farmers,” Basu said.

The farmers are protesting the three laws that the government says are meant to overhaul procurement procedures and grant them more options to sell their produce.

Ministers from Modi’s government at an industry event on Saturday in New Delhi appealed to leading industrialists and businesses to explain the benefits of the new laws to farmers.