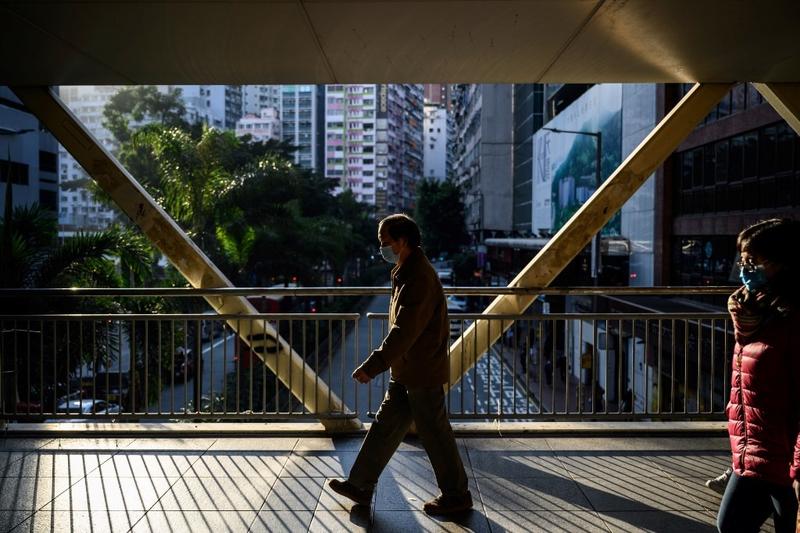 Pedestrians walk on a footbridge in Hong Kong on January 12, 2021. (ANTHONY WALLACE / AFP)

The three imported cases were from the United States, Pakistan and the Philippines, Chuang Shuk-kwan, head of the Centre for Health Protection’s communicable disease branch, said at a media briefing on Thursday afternoon.

The domestic helper from the Philippines developed symptoms at her workplace after finishing two weeks of hotel quarantine on Jan 7. Her employers would be quarantined

Chuang said the domestic helper from the Philippines developed symptoms at her workplace after finishing two weeks of hotel quarantine on Jan 7. Her employers would be quarantined.

There were also more than 30 preliminarily positive cases, she added. The city had reported 42 infections on Wednesday.

Chuang said that two new patients were linked to an outbreak at the central tunnel construction site of the Central Kowloon Route, which connects Yau Ma Tei with Kai Tak and Kowloon Bay. The group so far has 22 confirmed cases.

From Friday until Jan 31, the city’s construction workers can take a free coronavirus test offered by the government at any of the 19 community testing centers, Undersecretary for Food and Health Chui Tak-yi said at the same briefing.

Under the arrangement, those who want to be tested should make a booking online and present their construction worker registration card and booking confirmation when arriving at their testing center. Those who fail to make an appointment will need to pay HK$240 (US$31) for the test.

Over the past week, the city recorded 292 local coronavirus cases, 29 percent of which were untraceable, Chiu said, citing government data.

According to the CHP, a total of 27 virus cases had been detected in buildings at No. 20, 22, and 26 Reclamation Street in Jordan, involving 13 units. At least 79 residents were evacuated to quarantine facilities.

Chuang said in the afternoon briefing that one resident at Reclamation Street No. 24 was also confirmed to be infected while another tested preliminarily positive.

She said the affected buildings housed many subdivided units with substandard waste water pipelines and inadequate disinfection in their public areas, which may have contributed to the spread of the virus.

Chuang added that residents of three more buildings -- Shek Yam Estate Yan Shek House in Kwai Chung, The Spectra Tower 1 in Yuen Long and the building at Shanghai Street No.163-165 in Yau Ma Tei-- would be subject to mandatory testing after confirmed cases where found in their premises.