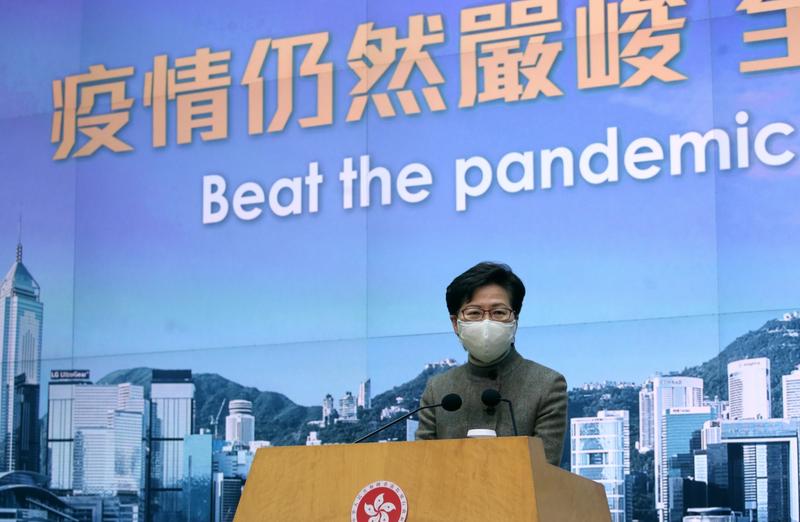 HONG KONG - Hong Kong’s Chief Executive Carrie Lam Cheng Yuet-ngor stressed that the city’s planned free coronavirus vaccination program would not be mandatory, and that cash incentives would not be provided for people who get inoculated.

Speaking to reporters before a meeting of the Executive Council on Tuesday, Lam said the fourth wave of COVID-19 infections in the city remained worrying, because clusters kept cropping up at hospitals, care homes and construction sites, and involved first aiders, ferry sailors and bus drivers.

“Over the past week, the local outbreak declined very slowly, and there were resurgences in (the number of) new cases,” Lam said, adding that people should not have gatherings involving non-family members.

Speaking on a radio program on Tuesday, Joseph Tsang Kay-yan, a local specialist in infectious diseases, said the recent fluctuations in daily caseloads represented transmissions that had occured during the late December holidays. He expected the number of local cases to stay in the double digits in January.

Although he believes virus curbs have been elevated to the toughest level, Tsang appealed to residents to be more careful when celebrating the Lunar New Year next month.

Lam also made it clear that a rollout of the vaccination program may not directly lead to a relaxation of social distancing rules.

“During the previous two waves, the government only started easing those measures when daily local cases could be counted in a single digit,” Lam said.

Meanwhile, government advisers said Hong Kong is in no hurry to roll out COVID-19 vaccinations, preferring instead to see what happens in other, harder-hit places.

“We have the luxury of a bit of time to observe how the program is being rolled out elsewhere, especially on the safety side,” Lam Ching-choi, a medical doctor and member of the Chief Executive’s advisory Executive Council, said in an interview on Monday. “Our experts are not in a hurry to be the first to be doing a vaccination program. We’re finding a balance between not having the vaccine late, and having adequate supplies, and we have the luxury to know that the vaccine we’ve purchased is safe.”

Unlike the US and the UK, which have administered millions of vaccinations since December, the Hong Kong Special Administrative Region has yet to authorize a vaccine and doesn’t plan to begin inoculations until February.

Officials already declined to receive a January shipment of Sinovac vaccines because regulatory approval was pending, according to Lam. The city has purchased enough doses -- a mix of the Pfizer Inc.-BioNTech SE, Sinovac Biotech Ltd and AstraZeneca Plc vaccines -- to cover its 7.5 million residents, and plans to offer people a choice of which vaccine they’ll take.

The HKSAR has reported just 9,343 coronavirus cases since the pandemic began, making it one of the most COVID-19-resilient places in the world. But the city is now struggling to contain a fourth wave that has resurrected tight social distancing requirements and frustrated local businesses -- especially restaurants -- and parents of school-age children. Authorities have reported between 25 and 60 daily cases over the last week.

The city has also seen 159 deaths from COVID-19 -- still roughly half of the total death toll inflicted on Hong Kong from severe acute respiratory syndrome, or SARS, which killed nearly 300 people in the early 2000s.

The cautious approach could result in wider public acceptance of the vaccines once they become available, according to David Hui, a professor of respiratory medicine at the Chinese University of Hong Kong and a member of the government’s COVID-19 advisory panel.

“It’s good that we have data from North America and also the UK -- which have already commenced the vaccination program -- to show us more information about the unknown side effects, such as severe allergic reaction, so we can have better preparation,” Hui said.