By Zhou Jin and Ma Jingna in Minxian, Gansu 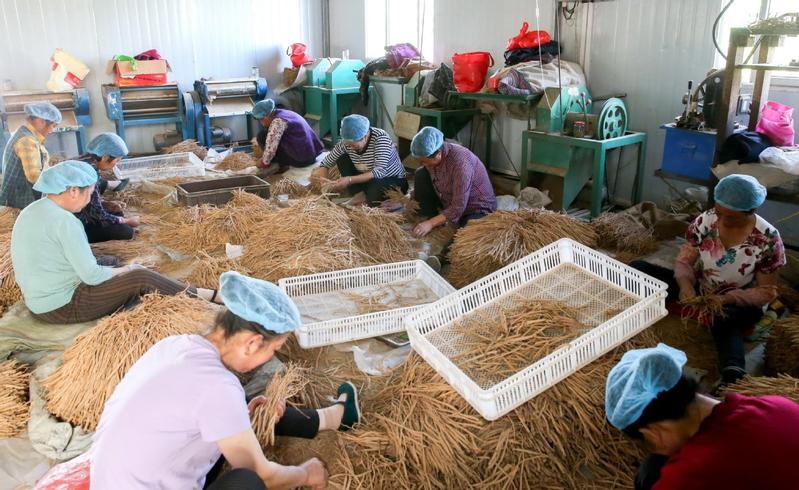 While villagers from Minxian county, in Dingxi, Gansu province, are busy processing Chinese herbs into medicinal products in an agricultural cooperative, an e-commerce company next door packages the products before they are delivered to online customers.

"Summer and earlier autumn often see a slowdown of sales," explained Li Aijun, founder of the e-commerce company. "We deliver around 3,000 to 4,000 parcels a day. The number could reach 5,000 during winter months."

The pandemic has led Chinese people to pay more attention to health, which has boosted the sales of Chinese herbs as they are conducive to improving immunity.

Products are mainly transported to southern provinces like Guangdong because people there like to make soup or tea with herbal products such as Chinese angelica, Astragalus membranaceus and Codonopsis pilosula, Li said.

Minxian has a long history of planting the three medicinal plants and is viewed as the hometown of Chinese angelica, commonly known as danggui. The county has planted over 40,000 hectares of traditional Chinese medicinal plants, accounting for about 51 percent of the arable land in the area, according to Li Kaiyin, Minxian's deputy Party secretary.

Revenue from Chinese herbal medicine sales accounts for nearly 60 percent of the per capita net income of local farmers, he said.

As one of the last of eight impoverished counties in Gansu, Minxian has been promoting the TCM industry and has looked to tap the potential of online markets in an effort to alleviate poverty.

Rapid development of the internet and technologies has helped e-commerce thrive, and due to COVID-19, many people shifted to shopping online, Li Aijun said, adding that internet-based sales in the past four months have seen a year-on-year increase of 25 percent.

Additionally, "the pandemic has led Chinese people to pay more attention to health, which has boosted the sales of Chinese herbs as they are conducive to improving immunity," he said.

During the pandemic period, Astragalus membranaceus, known as huangqi in Chinese, has been frequently used for the prevention of COVID-19 infections, which has resulted in the increase of sales and the price of the herb, he said.

But business was not always this good for him.

In 2014, Li quit his job at a wind power enterprise in Gansu's Jiuquan city and returned to Minxian, his hometown, to start his e-commerce business. At the time, e-commerce was still a fledging business in the county.

Li, along with an acquaintance, set up the first online store in Dingxi on Alibaba's shopping site Taobao.

"I had got bogged down for a year with insufficient funds and staff, and I lacked technology and understanding about online retailing," Li said. "E-commerce was too new for local villagers to understand and accept at that time."

But Li said he stayed the course because he believed in the quality of local Chinese medicinal plants and the potential of the online market.

He guided planters to set up professional cooperatives in order to integrate resources and attract more poverty-stricken households to grow herbs with standardized planting models, and paid them 2 to 3 yuan ($0.43) above the market price for their products.

"Such moves not only ensure the quantity and quality of the products, but also increased the income of the farmers," he explained.

Li has signed agreements on planting, purchasing and sales of Chinese medicinal plants with 10 local cooperatives, increasing the monthly income of each cooperative from 5,000 to 10,000 yuan and creating jobs for about 100 farmers, including 37 people from poor households.

The cooperative next to Li's company can process 200 metric tons of processed products a year and accounts for nearly 40 percent of the company's online sales, said Qin Yuandong, who runs the cooperative. The cooperative offered jobs for 50 local villagers, including 15 people from poverty-stricken households, he said.

Li also set up a workshop to provide jobs for 78 local villagers in his company, including 20 people from impoverished households.

He Weili, 30, has worked in the factory since January 2019. She works about nine hours a day packaging goods for delivery and earns about 3,000 to 4,000 yuan per month.

Working at the factory is less tiring than at construction sites outside and gives her more time to take care of her parents and children while earning a good income, He said.

"Women also need and are able to make money to support the family," she said.

According to Li Kaiyin, the deputy Party secretary, there are over 60 e-commerce companies in Minxian, and they have set up more than 1,000 online stores selling Chinese medicinal products in various platforms like Taobao, Pinduoduo and WeChat.

The TCM industry has become a pillar industry that has increased incomes of local people and has boosted the county's economic development, he said, adding that e-commerce has also played an important role in promoting products.