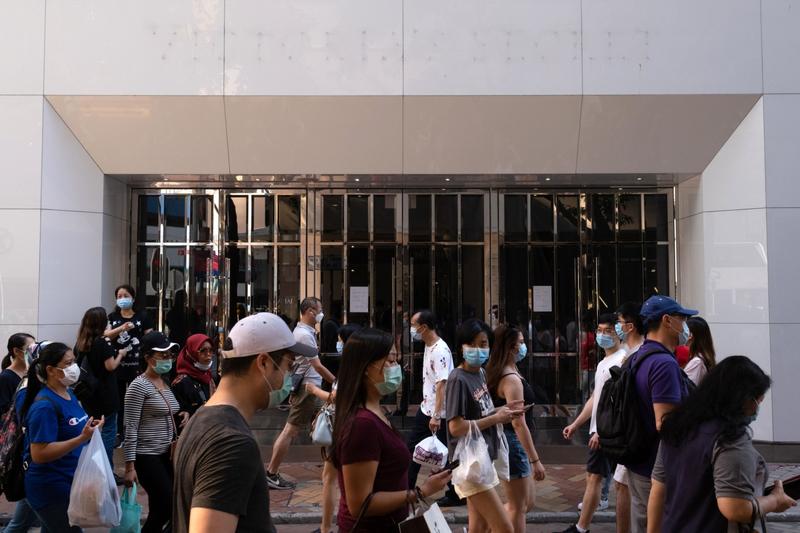 The Hong Kong Special Administrative Region government has revised its 2020 forecast for the city’s economy to a record low range of -6 percent to -8 percent amid the global coronavirus pandemic and rising trade tensions.

The latest forecast is worse than the prior projection of -4 percent to -7 percent, according to a government statement

The latest forecast is worse than the prior projection of -4 percent to -7 percent, according to a government statement. The government also provided an unchanged final GDP reading for the second quarter of -9 percent on a year-on-year basis, and -0.1 percent from the prior quarter.

A decline to the upper end of the projected range would still surpass the previous record low contraction of -5.9 percent in 1998, according to data since at least 1962 compiled by Bloomberg. Hong Kong’s economy has also never posted consecutive years of economic decline, the data show.

“If the current wave of local infection can be contained within a short time and barring any further sharp deterioration in the external environment, economic performance for 2020 as a whole can hopefully fall within the upper half of the range forecast,” Andrew Au, the government economist, wrote in the report. “The tense China-US relations and heightened geopolitical tensions also fuel uncertainties.”

The government also revised its forecast for headline inflation this year to 0.8 percent from 1.4 percent. The impact of a surge in pork prices since last May has largely dissipated and inflationary pressure is expected to ease further in the second half of the year amid subdued economic conditions, the government said. 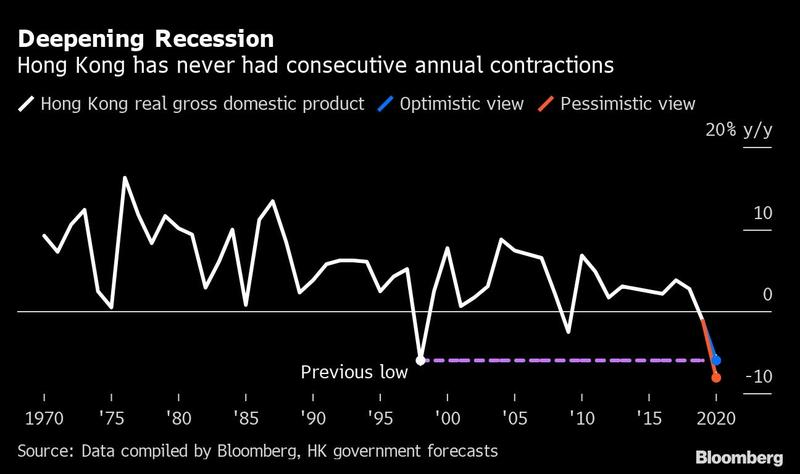 Private consumption declined a record 14.2 percent in the second quarter from a year earlier, blamed on social distancing measures to control the spread of COVID-19, according to the government report. Total exports of goods fell 2.4 percent in the quarter, while exports of services fell a record 46.1 percent.

The residential property market picked up, with the number of transactions rising 67 percent from the first quarter, though still down from the same period a year go.

The labour market continued to deteriorate in the second quarter of 2020. The seasonally adjusted unemployment rate surged to 6.2 percent, the highest in more than 15 years, the government said.

The underemployment rate also rose visibly to 3.7 percent, the highest in close to 17 years. Total employment fell markedly from a year earlier. Nonetheless, signs of stabilization emerged towards the end of the quarter, thanks to abating local epidemic situation as well as the cushioning effect of the Employment Support Scheme, it added.

HKSAR Financial Secretary Paul Chan said earlier this month that the economy is likely to face greater pressures in the third quarter and more time is needed than expected for recovery.

The government will continue to closely monitor the situation and roll out measures as necessary to maintain the vitality of the economy and pave the way for a speedy recovery once the threat of the epidemic recedes, Au said.

While the government relief can only help businesses keep afloat for a longer time, it is the epidemic developments that can truly decide when the economy can start to pick up. Only when the coronavirus spread is contained, Hong Kong's economic activities can be resumed.

Although Hong Kong's economic ties with foreign countries are still unlikely to recover amid the pandemic, the enormous consumer market and financial demands of the mainland, where life has largely returned normal, will offer a great opportunity for the Hong Kong economy to revive, Chan said.

Taking advantage of the Guangdong-Hong Kong-Macao Greater Bay Area development, Hong Kong can hopefully revive and people's livelihood can also improve after the epidemic is over, Chan said.

With inputs from Bloomberg, Xinhua