By Li Lei and Li Hongyang 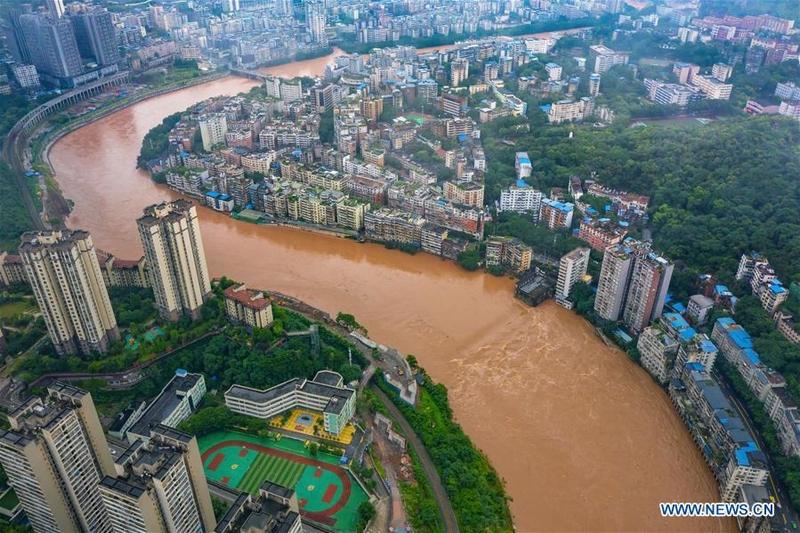 The National Meteorological Center on Wednesday renewed a warning for torrential rains that have unnerved southerners for the past month, prompting authorities to deploy tens of thousands of responders.

According to the center's latest alert for heavy rains, the new round of precipitation is forecast to batter the provinces of Guizhou, Sichuan, Yunnan, Fujian and Zhejiang, as well as Chongqing municipality and the Guangxi Zhuang autonomous region, from July 1 to 2.

In the affected regions, rainfall could reach 100 to 150 millimeters, raising risks for torrential floods and other geological disasters, the alert said.

The alert, which the center has issued for 30 consecutive days, came after marathon-like downpours caused tens of billions of yuan in economic damage over the past few weeks

The alert, which the center has issued for 30 consecutive days, came after marathon-like downpours caused tens of billions of yuan in economic damage over the past few weeks.

Figures offered by the center show five rounds of heavy rainfall have hit southern China since last month, producing at least 200 millimeters of accumulated precipitation on about 1.5 million square kilometers of land.

"The Pacific and Indian oceans are two powerful suppliers of water vapor in our country. In summer, wind usually blows from south to north, transporting the vapor from the ocean to the land," he said.

As rainfall continues, Hu said, affected regions are vulnerable to disasters such as floods in small or medium rivers, mudslides and mud-rock flows, and the public must cut outdoor electricity and suspend outdoor operations as precautions.

The National Flood and Drought Control Office and the Ministry of Emergency Management on Monday urged first responders to prioritize people's lives and interests as they moved to forecast future deluges and relocate affected residents.

The two agencies said they have deployed more than 28,000 firefighters and relocated 34,700 people.

By Sunday, the sustained rainstorms had affected 12.1 million people scattered across 13 provincial regions south of the Yangtze River, killing 78, ruining almost 80,000 hectares of crops and leading to 25.7 billion yuan (US$3.6 billion) in direct economic damages, according to the ministry.

Bearing the brunt were some of China's poorest regions, including the Liangshan Yi autonomous prefecture in Sichuan province, which has been ravaged by continuous rainfall since June 26

Bearing the brunt were some of China's poorest regions, including the Liangshan Yi autonomous prefecture in Sichuan province, which has been ravaged by continuous rainfall since June 26.

According to authorities in Mianning county, Liangshan, 14 people had been killed by 11 pm on Tuesday, with eight still missing on Wednesday. Almost 1,800 families were relocated to makeshift shelters.

To offset the impact on vulnerable communities, China's top antipoverty agency on Tuesday urged better monitoring of farmers susceptible to flash floods and other geological disasters.

In a circular on its website, the State Council Leading Group Office of Poverty Alleviation and Development said local authorities should roll out assistance programs targeting those impoverished by the floods and investigate how vulnerable people have been affected.

Through the program, monitors would be sent to track individual families prone to such risks and allocate help, as well as ensure safe housing and drinking water for those affected. Officials are required to rule out risks in infrastructure and speed up repair of damaged houses, roads, water conservancy facilities and other poverty alleviation projects, the group said.

Others measures include local authorities helping affected farmers claim agricultural insurance compensation and create new jobs to offset the decline in agricultural revenue among the affected families, it added.

China has pledged to eliminate absolute poverty by the end of this year.