New round of torrential rain set to batter 13 provincial regions 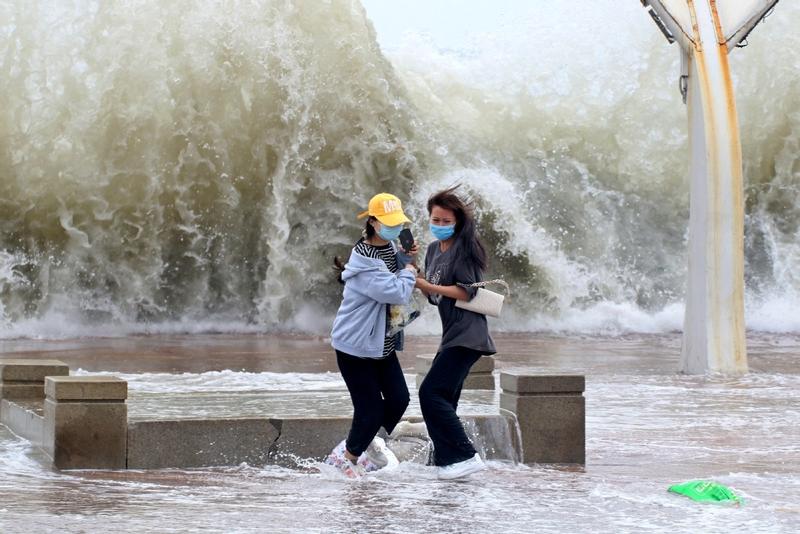 People dodge waves at Binhai Square in Yantai, Shandong province, on June 24, 2020. Due to the influence of typhoons and astronomical tides, the city was attacked by storm tides. (TANG KE / FOR CHINA DAILY)

More downpours are expected in the coming five days in many areas around the middle and lower reaches of the Yangtze River amid an increasingly grimmer flood control situation that has seen over 8 million residents in the basin of the country's longest watercourse suffer, authorities warned.

The new round of torrential rains from Friday to Tuesday will affect 13 provincial regions, including Hubei and Hunan provinces, according to the Ministry of Emergency Management.

The Ministry of Emergency Management has also warned of the increased risks of floods in medium and small-sized rivers, waterlogging in urban areas and mountain torrents in the affected areas, especially in those where water has accumulated because of previous downpours

China's national observatory renewed blue alerts for rainstorms and severe convective weather, which is characterized by strong winds, hail, thunderstorms and brief but heavy rainfall, for the 24 hours starting from 2 pm on Thursday.

Local authorities should screen their drainage systems for hazards and take necessary precautions against mountain torrents, landslides and mudslides, and people should minimize outdoor operations in hazardous areas, the center said.

The ministry has also warned of the increased risks of floods in medium and small-sized rivers, waterlogging in urban areas and mountain torrents in the affected areas, especially in those where water has accumulated because of previous downpours.

"Some medium and small-sized rivers may experience floods raising the water above warning levels," it noted.

Recent downpours have already wreaked havoc in many areas along the Yangtze. As of Tuesday, almost 8.2 million people in 10 provincial regions in the Yangtze basin had suffered floods. Meanwhile, 255,000 people had to be evacuated, according to the ministry.

"Currently, the entire Yangtze basin has entered its main flood season. It's a critical time for flood control and disaster relief," it said.

The ministry has demanded that local authorities strengthen the coordination of water conservancy projects to cope with the situation.

Flood control projects along the Yangtze should be subject to unified coordination, and major water conservancy projects, such as the Three Gorges Reservoir, should fully play their role in stopping and storing floodwater, it said.

It also asked local authorities to timely evacuate people by ramping up monitoring and early warning, which has proved its efficiency in many of the affected areas.

In Chongqing, for example, restaurant worker Huo Dinghua said he managed to minimize his losses from the biggest floods on record in the section of Qijiang River in the municipality thanks to the early warning issued by local authorities.

At 11:50 am on Monday, Chongqing's hydrological monitoring station issued a red alert for the record flood that would occur in eight hours.

"I not only received an early warning message in advance but was also reminded by the local authorities to transfer my valuables as soon as possible," he said.