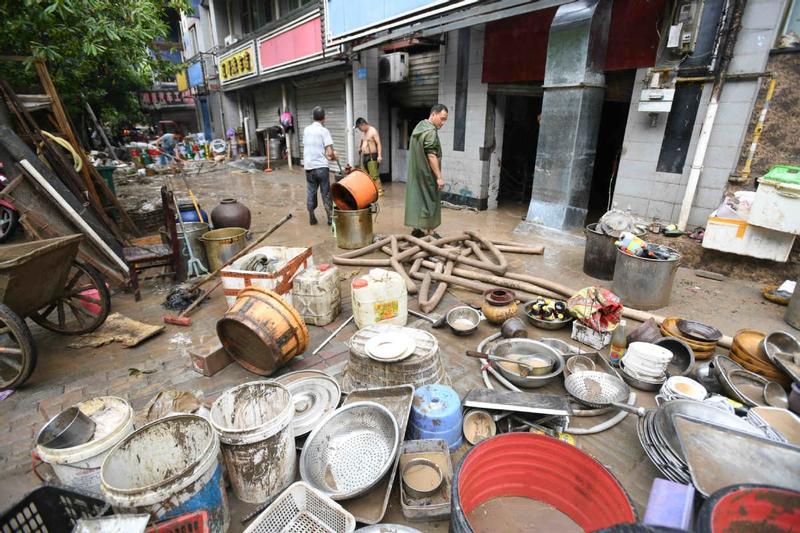 Residents clear home items that have been carried outside by floodwater in Chongqing on Tuesday. (PHOTO PROVIDED TO CHINA DAILY)

Ongoing downpours that will bring over 10 more centimeters of precipitation to many areas of the Yangtze River Basin are expected to last until Thursday, further exacerbating the already grim flood control situation there, authorities warned.

Floods occurred in 36 rivers following rainfall on Saturday and Sunday in Southwest China and areas around the middle and lower reaches of the Yangtze. The Xiaojinchuan River in Sichuan province even experienced its strongest flood on record, according to the Ministry of Water Resources.

From Monday to Thursday, seven provincial regions are forecast to be hit by strong rainfall. On average, the accumulated precipitation in the affected areas during that time will be 10 to 16 centimeters. The worst-hit area may receive precipitation of over 20 centimeters

More torrential rain, however, is still on the way. From Monday to Thursday, seven provincial regions are forecast to be hit by strong rainfall. On average, the accumulated precipitation in the affected areas during that time will be 10 to 16 centimeters. The worst-hit area may receive precipitation of over 20 centimeters, a media release by the ministry late on Monday said.

Hunan and Jiangxi provinces and Guangxi will be the worst-hit by floods, and six major rivers in the three regions, including the Xiangjiang and Liujiang rivers, will see water levels rise above their warning levels. "Some medium and small-sized rivers in areas engulfed by the downpours may be stricken by major floods," it said.

According to the China Meteorological Administration, Guizhou province, Chongqing municipality and regions in the middle and lower reaches of the Yangtze have received 10 to 20 centimeters of precipitation since June 20.

"In the coming three days, rain will remain heavy as the rain band moves slowly to the south," it said on Tuesday.

In Guizhou, the provincial authorities had to urgently dispatch 2 million yuan (US$283,000) in disaster relief funds on Monday to its worsthit Tongzi county to help local people through difficulties. Workers from various government bodies, public institutes and soldiers have also been devoted to the disaster relief work.

Over 100 soldiers of the Chinese Armed Police Force, for example, arrived in Mugua township in the county on Monday, the day when it suffered a torrential rain that left many houses isolated.

"There are 15 cooks on the team. We have also brought with us many daily necessities. We will make all-out efforts to help the affected people," said Qin Zhuqiao, one of the cooks on the team as he was busy preparing food on Monday.

According to the ministry, it has dispatched teams to each of the six most affected provincial regions, including Hunan and Guizhou, to facilitate local governments' efforts in flood control

Liu Ying, a teacher from the primary school in the township, said all teachers in her school have participated in the disaster relief work. Many of them, for example, helped clean the streets trashed by the floods.

"The more people we have, the greater strength we boast," she noted.

E Jingping, deputy head of the State Flood Control and Drought Relief Headquarters, has demanded all-out efforts to enhance precautionary measures to cope with the situation.

"Local authorities should give priority to ratchet up precautionary measures in medium and small-sized rivers in their flood control work," said E, also minister of Water Resources.

"Considering the comparatively weak flood control capabilities in these rivers and the possible occurrences of sharp and abrupt increases in their water levels, patrols should be intensified in key and vulnerable sections."

Aside from enhancing early warning for mountain torrents, he also asked for better coordination between water conservancy projects so they can fully play their roles in stopping and storing floodwaters.

According to the ministry, it has dispatched teams to each of the six most affected provincial regions, including Hunan and Guizhou, to facilitate local governments' efforts in flood control.

The Ministry of Emergency Management said on Tuesday that a team headed by Vice-Minister Zheng Guoguang has concluded a five-day inspection tour on flood control in Jiangxi and Hunan provinces.

"We have been at a critical moment for flood control in the Yangtze River Basin," Zheng noted.

People threatened by floods should be evacuated in advance, and both rescue forces and materials should be coordinated and dispatched in a timely manner, he stressed during the tour.

Yang Jun in Guiyang contributed to this story.