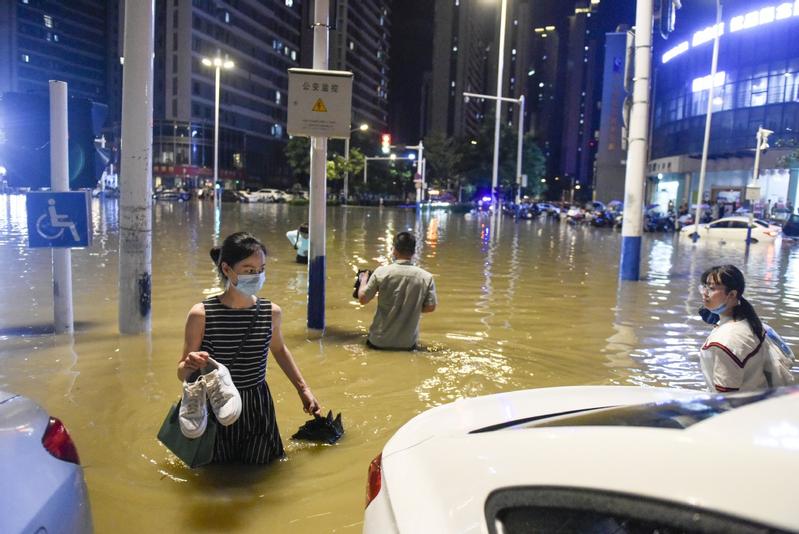 People wade through water after heavy rainfall at a street in Hefei, Anhui province, on June 27, 2020. (HUANG YANGYANG / FOR CHINA DAILY)

President Xi Jinping has underlined the importance of putting people and life first in an instruction given on the country's flood control and disaster relief work.

The National Meteorological Center issued an alert for rainstorms for the 27th straight day on Sunday as floods caused by continuous downpours have left at least 81 people missing or dead.

With downpours increasing in southern and southwestern China, many areas have been hit by flooding and geological disasters, Xi said. He required local governments at all levels and all related departments to make all-out efforts to prevent disasters and carry out emergency rescue work.

Noting that some areas hit severely by floods will enter the typhoon season, Xi, who is also general secretary of the Communist Party of China Central Committee and chairman of the Central Military Commission, asked departments including the State Flood Control and Drought Relief Headquarters to strengthen coordination and guide the flood and typhoon prevention and relief work in relevant regions.

He also required efforts to strengthen monitoring over the flood situation, to identify potential risks in a timely manner, and to well organize rescue and relief work.

Xi noted that people affected by the disasters should receive appropriate resettlement and that top priority should be given to guaranteeing people's lives and safety.

The National Meteorological Center issued on Sunday a yellow alert, the second-lowest in the country's four-tier color-coded weather warning system, for rainstorms for the 24 hours starting from 2 pm on Sunday.

During that time, some areas in nine provincial regions, mostly located in southern parts of the country, will be engulfed by torrential rains. Among them, central and southern parts of Jiangsu province and northern parts of Shanghai will be the worst hit and receive precipitation of 10 to 20 centimeters, according to the center.

The center also issued a blue alert, the lowest in the warning system, for severe convective weather, which is characterized by strong winds, hail, thunderstorms and brief but heavy rainfall, for the same period. The greatest hourly precipitation in the affected areas will generally be between 3 and 5 centimeters but may exceed 7 centimeters in the most extreme circumstances, it said.

Some areas in Hubei, Anhui, Jiangsu and Zhejiang provinces will be hit by thunderstorms and gales, it added.

Continuous rainfall has wreaked havoc in many regions across the country, especially southern parts of the country.

According to the Ministry of Emergency Management, 13.74 million people in 26 provincial regions had suffered from floods caused by continuous downpours and over 744,000 people had been evacuated as of Friday.

The direct economic losses from the floods have reached 27.8 billion yuan (US$3.93 billion), it added.

A rainstorm that lashed Mianning county in Sichuan province, for example, caused the deaths of three people, and another 12 are reported missing.

The rainstorm started at 6 pm on Friday and ended at 1 am on Saturday, causing two deaths after part of an expressway collapsed and one car and one minivan fell into a river. The third death was reported in the town of Yihai, according to the county's information office.

Sheltered in one of the four resettlement areas accommodating more than 2,100 people affected by the rainstorm, Ah Limo, 13, from the village of Caogu, said that it was "terrifying".

Two hours after the rainstorm struck the county together with hail, the power supply was cut. At 11 pm, a village official asked his family to go to a resettlement area to escape the flood.

He Jianmei, deputy Party secretary of Mianning, said each resident in the four resettlement areas received two loaves of bread, a bag of milk and mineral water for supper on Saturday and lunch boxes on Sunday.

The Ministry of Water Resources warned of the risk of major floods of small and medium-sized rivers in areas affected by the coming rainfall.

Due to downpours from 8 am on Friday to 8 am on Saturday, 13 rivers in southern parts of the country rose above their warning levels. As the rainfall continues, watercourses in the basins of the Yangtze, Huaihe and Pearl rivers and Taihu Lake are expected to see a marked increase in their water levels, it said.

The ministry has demanded intensified monitoring and patrolling to cope with the situation.

Hydrologic monitoring should especially be ramped up in the areas of the Huaihe River and Taihu Lake. Local emergency management authorities should be notified of the results in a timely manner so they can prepare flood and disaster relief work, the ministry said.