Cash, tax cuts on the table in HK's recession budget 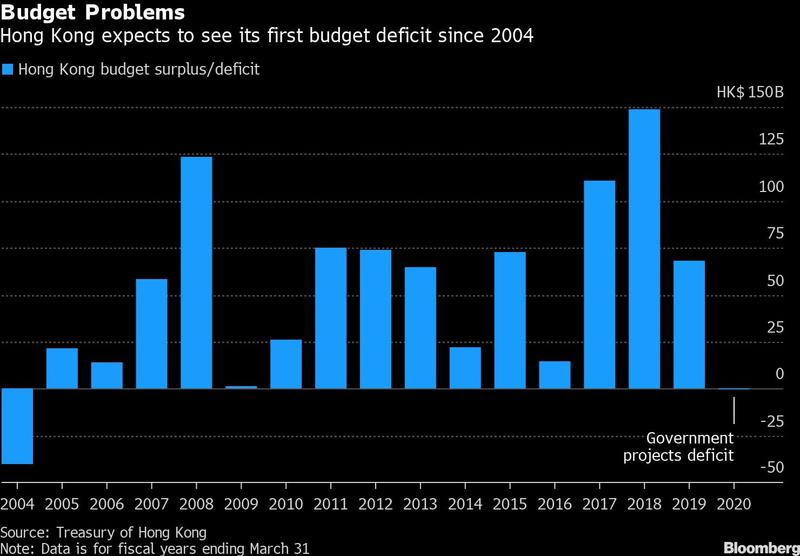 As the Hong Kong government posts its first deficit in more than 15 years, all eyes will be on financial secretary Paul Chan’s budget release Wednesday and how he’ll tap cash reserves to stimulate an economy under pressure from protests stemming from the extradition bill incident and the coronavirus outbreak.

Anti-government protests drove the city into recession last year and economists now forecast another slump for 2020, spelling the first back-to-back annual contractions on record. Yet Chan holds a major card that he has largely yet to play: A fiscal reserve that stood at HK$1.12 trillion (US$144 billion) as of Dec 31.

One factor that could inform Hong Kong’s response is the big packages announced elsewhere, such as by rival Singapore, which has pledged to post its biggest budget deficit since at least 1997 to combat the impact of the virus. While Hong Kong has historically espoused a conservative fiscal policy, the government has already earmarked an extra HK$30 billion in this fiscal year to help those affected by the virus outbreak.

Financial Secretary Paul Chan has so far played down talk of cash handouts, though he said the government wanted to have a “bold” response

“No government wants to be accused of having done too little,” said Alicia Garcia Herrero, chief Asia Pacific economist at Natixis SA.

So far, the spending measures rolled out to deal with Hong Kong’s downturn have been limited, focusing on helping low-income families and enterprises that have been most hurt by the damaged economy. Chan has so far played down talk of cash handouts, though he said the government wanted to have a “bold” response.

“The government’s resources are always limited, and this budget cannot fully meet everyone’s requirements,” Chan said in a blog post Sunday, according to translated text from the Chinese-language post.

In an earlier post describing “tsunami-like” shocks to the economy, Chan appeared to temper expectations by raising concerns about the long-term affordability of stimulus measures given the recent surge in government spending amid the recession.

“The projected fiscal deficit for the new fiscal year may be a record high in terms of dollar value,” he said.

Hong Kong last posted a budget deficit in March 2004 of about HK$40 billion in the aftermath of the SARS epidemic.

Chief Executive Carrie Lam Cheng Yuet-ngor earlier this month pledged an extra HK$30 billion in funding, targeting those affected by the virus outbreak. Specific proposed measures include an HK$80,000 one-off subsidy to licensed tour agencies and up to HK$200,000 one-off subsidy to restaurants -- sectors hit hardest by the downturn.

The package is on top of about HK$35 billion in stimulus and livelihood spending announced since the start of protests in June. The city in January announced a HK$10.6 billion injection to revitalize the Ocean Park attraction, which is now closed because of the epidemic.

Tommy Wu, senior economist with Oxford Economics in Hong Kong, said he anticipates the coming budget will focus on long-term spending such as on housing, health care and social welfare “as well as policies to help Hong Kong keep its existing competitiveness in the financial industry and to develop new industries.

Other recurring items that appeared in the last budget may also spring up including:

·       One-off tax reductions on salaries for most citizens

Much speculation has centered on a potential HK$10,000 cash handout to residents to bolster consumption.

A large cash handout may not be the best option, as the greater the payout, the more likely it is people will try to save the cash if possible instead of spending it, said Natixis’ Garcia Herrero

Accounting firm KPMG LLP earlier this month came out in favor of the HK$10,000 payout in the form of electronic spending vouchers, advocating bold spending by tapping the ample fiscal reserve. The firm forecasts a deficit of HK$47.7 billion.

A large cash handout may not be the best option, as the greater the payout, the more likely it is people will try to save the cash if possible instead of spending it, said Natixis’ Garcia Herrero.

“It is easy for the government to implement but not a good policy,” she said.

Rival firm PwC also warned that a handout to all adult permanent residents in the city would lead to extra spending of as much as HK$70 billion, according to Hong Kong tax partner Jeremy Choi. He instead called for short-term relief measures such as interest-free loans to affected retail, restaurant, hotel and tourism firms as well as other tax measures such as a simplified installment payments application process and enhanced tax deductions.

Chan downplayed prospects for a handout in an interview with Bloomberg TV in January, before the shutdowns connected to the virus outbreak that have further hurt economic growth in the city.