HONG KONG - Hong Kong's government pledged HK$4 billion (US$511 million) on Wednesday in new relief measures to help bolster an economy battered by months of protests that have eroded business confidence in the Asian financial hub. 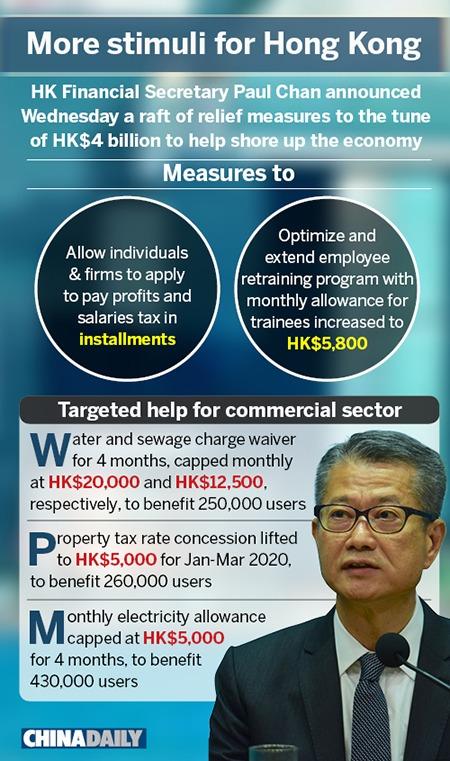 The city's Financial Secretary Paul Chan Mo-po announced the measures at a news conference, where he also told reporters the anti-government protests stemming from the extradition bill incident had hurt international investor confidence in the special administrative region.

"During an economic downturn, supporting employment is the number one priority of the government," Financial Secretary Paul Chan Mo-po said as he announced the package.

The latest boost brings the government's total pledged amount of relief to HK$25 billion (US$3.2 billion). It remains to be seen whether that will be enough to help the economy, reeling from a drop-off in tourism and a record decline in retail sales.

A list of nine new measures included subsidies for water and sewer bills as well as waivers on property tax rates for businesses. Individuals and companies also may apply to pay profits and salaries tax in installments.

Chan described the measures as mainly aimed at helping small and medium-sized businesses, in order to safeguard jobs.

It marks the fourth round of such stimulus after the government previously offered around HK$21 billion in economic support, particularly to help the transport, tourism and retail industries.

The latest boost brings the government's total pledged amount of relief to HK$25 billion (US$3.2 billion)

The International Monetary Fund on Wednesday commended the SAR government for its recent introduction of fiscal stimuli to support the sluggish economy.

“Expansionary fiscal policy is needed to support the slowing economy in the near term,” IMF said in its latest regular review of the economy.

It also noted that “a history of prudent macroeconomic policies has left Hong Kong with significant buffers to navigate through cyclical and structural challenges”.