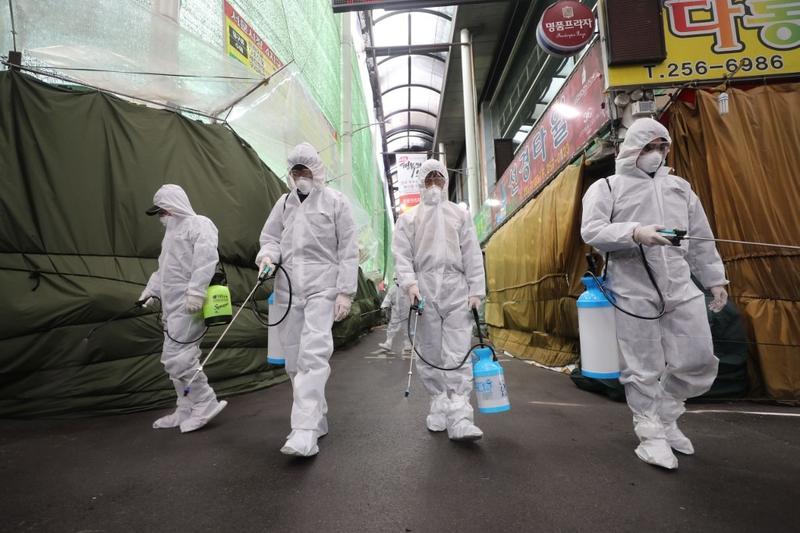 SEOUL/BASRA/DUBAI/KABUL/MANAMA/HANOI/TOKYO/BAGHDAD - International concern about the spread of coronavirus outside China grew with sharp rises in infections in South Korea and Iran, and new cases identified in Aghanistan, Bahrain, Iraq and Kuwait.

South Korea reported 231 new cases of the coronavirus, bringing the total number of infected patients in the country to 833, health authorities said on Monday, a day after the government raised its infectious disease alert to its highest level.

The Korea Centers for Disease Control and Prevention (KCDC) updated the tally twice at 10:00 am and 5:00 pm local time.

Two clusters of infections in the country's southeastern region contributed the most to the recent viral spread.

Of the total patients, 681 were residents in Daegu and the surrounding North Gyeongsang province.

As of 9:00 am local time, 458 cases were linked to a church in Daegu after a 61-year-old woman known as “Patient 31” who attended services there tested positive. It was up from 329 in the previous day.

Out of 70 new cases added to the afternoon announcement, the link to the church had yet to be known.

The KCDC also reported the seventh and eighth deaths, both from a hospital in Cheongdo, a county where confirmed cases surged in recent weeks, along with nearby Daegu.

“If we cannot block the spread in the Daegu region in an effective way, there are high possibilities it would lead to a nationwide transmission,” Vice-Health Minister Kim Kang-lip said at a regular briefing.

While most of the new cases were traced to Daegu, the country’s fourth-largest city with the largest number of coronavirus cases for the time being, almost all major cities and provinces reported some infections.

Authorities are still investigating the exact cause of the new outbreak, with Patient 31 having no recent record of overseas travel.

Kim said the government has taken self-quarantine measures and is conducting tests on about 9,500 people who took part in services at a Daegu branch of the Shincheonji Church of Jesus, also known as the Temple of the Tabernacle of the Testimony, attended by Patient 31.

A series of political and cultural events for this week has been canceled in South Korea, and a total of 24 national museums and libraries will be temporarily closed

Bamboo Airways will suspend flights between Da Nang and Nha Trang to Seoul’s Incheon International Airport from Feb 26 over coronavirus concerns, the company said on Monday.

President Moon Jae-in on Monday said the government should start reviewing whether a supplementary budget should be drawn up to head off the impact of the coronavirus outbreak on the country's economy.

“The government will be all-out to minimize economic impact and make sure the recovery momentum would not be interrupted as we prepare for the worst-case scenario,” South Korean Vice-Finance Minister Kim Yong-beom said earlier in the day.

In Daegu and elsewhere, citizens flocked to large supermarkets and pharmacies to buy surgical masks and supplies.

A series of political and cultural events for this week has been canceled, while the culture ministry said on Monday a total of 24 national museums and libraries will temporarily close.

The National Assembly called off a government questioning session slated for Thursday afternoon as at least three lawmakers underwent a check after coming in contact with an education official who tested positive.

Catholic churches in Daegu and Gwangju have suspended services and other gatherings, while churches elsewhere saw declines in attendance on Sunday, especially among the elderly. 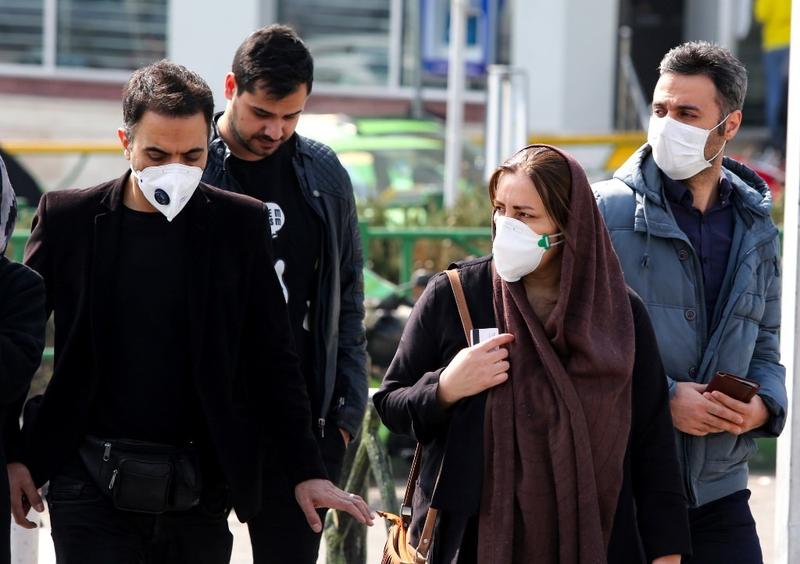 Iranians wearing face masks wait to cross a street in Tehran, the capital of Iran, on Feb 22, 2020. (ATTA KENARE / AFP)

In Iran, Minister of Health and Medical Education Saeed Namaki was quoted as saying by the Iranian Student News Agency that as many as 47 Iranians have been confirmed infected with the virus, out of which 12 people have died.

The infected people are from the Iranian central cities of Qom and Arak, northern cities of Rasht, Tonokabon and capital Tehran.

Iran's minister of health and medical education was quoted as saying as many as 47 Iranians have been confirmed infected with the virus, out of which 12 people have died

Qatar will ask passengers arriving from Iran and South Korea to remain in home isolation or a quarantine facility for 14 days over fears of new coronavirus outbreak, Qatar Airways said in a statement on Monday.

The two Omani women diagnosed with the disease had visited Iran, it said. They are in stable condition, it added.

Oman’s civil aviation authority halted all flights between the sultanate and Iran, it said.

In Kabul, Afghanistan’s Minister of Public Health Ferozuddin Feroz said the country had identified its first case of coronavirus in the Western province of Herat, which borders Iran. The minister announced a state of emergency in the province.

The case involves a Bahraini citizen arriving from Iran, who was suspected of having contracted the novel coronavirus based on displaying symptoms, the ministry said in a statement.

Aghanistan and Bahrain both reported one new case each, while Kuwaiti state news agency KUNA reported that three people were infected

The three cases were among around 800 people evacuated from the Iranian city of Mashhad last week due to the COVID-19 outbreak in Iran, KUNA quoted the Ministry of Health's statement as saying.

The new cases involve a 53-year-old Kuwaiti citizen, a 61-year-old Saudi citizen, and a 21-year-old man, according to the statement.

The first two cases did not show any symptoms, while the third case showed initial symptoms, according to the statement.

Meanwhile, Iraq identified an Iranian national in the holy Shiite city of Najaf in south of Baghdad as the country's first coronavirus, a local medical source said.

Iraq has shut its Safwan border crossing with Kuwait to travellers and trade at Kuwait’s request, the local mayor told Reuters without providing a reason.

In Japan, a panel of Japanese medical experts sought to play down deepening criticism of the government’s handling of a coronavirus outbreak on a cruise ship while acknowledging mistakes were made.

Confirmed cases on the British-registered Diamond Princess have reached 691 with three deaths since the ship docked at Yokohama port on Feb 3.