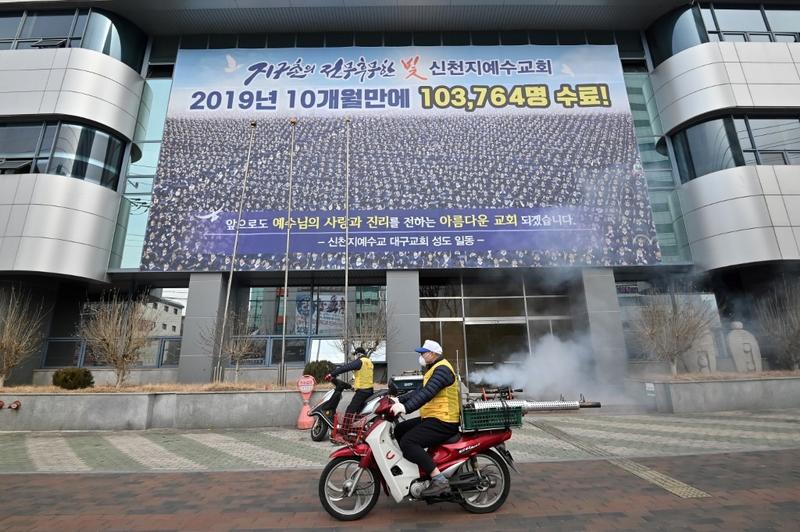 South Korean health officials spray disinfectant in front of the Daegu branch of the Shincheonji Church in the southeastern city of Daegu on Feb 21, 2020. (JUNG YEON-YE / AFP)

SEOUL/TOKYO - South Korea said on Saturday that the number of people infected with the coronavirus in the country had more than doubled to 433.

Korea’s Centers for Disease Control and Prevention reported 142 new cases at a morning briefing and another 87 in the afternoon. It had reported 204 cases on Friday.

Officials said almost all the new cases were linked to outbreaks at a branch of the Shincheonji Church of Jesus in Daegu and a hospital in Cheongdo county.

Officials have flagged that the tally could rise significantly higher as more than 1,000 people who attended the church at the center of the outbreak reported flu-like symptoms.

KCDC designated both the city of Daegu, which has a population of 2.5 million people, and Cheongdo county, home to around 43,000 people, as “special care zones” on Friday. Officials were sending in military medical staff and other health workers, and extra resources, including hospital beds.

At least half of the national cases are linked to a 61-year-old woman known as “Patient 31” who attended religious services at a branch of the Shincheonji Church of Jesus in Daegu, the Temple of the Tabernacle of the Testimony. The woman had no recent record of overseas travel, authorities said.

KCDC said on Saturday they had obtained a list of 9,300 people who had attended church services, around 1,200 of whom had complained of flu-like symptoms.

“We are conducting investigation based on the database ... we have obtained,” KCDC Director Jeong Eun-kyeong told reporters.

The church and Cheongdo hospital outbreaks may also be linked as several church members attended a funeral at the hospital for the brother of the founder of the church earlier this month. President Moon Jae-in has called for officials to investigate potential links.

“We think the patients had repeated exposure given the isolated facility of the psychiatric wards where many patients share the same room,” KCDC Director Jeong Eun-kyeong told reporters.

The hospital, which has around 600 patients and staff, has been closed and patients are still being transferred to other facilities.

Two people have died in South Korea in the current outbreak; a woman in her fifties who was moved from to Busan for treatment and a 63-year-old man. Both were patients at the Cheongdo hospital.

Among the new cases confirmed on Saturday, two were in Busan, while one was on Jeju, a soldier stationed on the island who had come into contact with residents in the Daegu area. The government had previously banned all military personnel at a Daegu base from leaving the barracks.

One of the new cases is a woman in her 60s who is a junior high school teacher in Chiba prefecture, east of Tokyo, according to a prefectural government official.

Authorities will close a school in Chiba prefecture as one of its teachers tested positive for the virus. She went to work while she had symptoms

The woman first showed symptoms on Feb 12 and was hospitalized on Feb 19, according to media. She went to work while she had symptoms, so the local government will close her school for two days from Feb 25.

The second case was a woman in her 30s, also in Chiba prefecture, who has been hospitalized but is not showing any symptoms, the prefectural government official said.

There is no relationship between the two women and it is uncertain how either of them got the virus, the official said.

In Japan, 99 people have now tested positive for the flu-like illness.

Over 600 cases have also been reported on the Diamond Princess cruise ship that has been quarantined off Yokohama for more than two weeks. Two elderly passengers died, taking the total of domestic deaths in Japan from the virus to three.

In Iran, meanwhile, four people have died from infection of the novel coronavirus disease, an advisor to Iran's Ministry of Health and Medical Education said on Friday.

"So far, 18 Iranians have been infected by the virus, out of which four have died," Alireza Vahabzadeh was quoted by the official IRNA news agency as saying.