New rail links provide an opportunity to experience the natural, the manmade and the historical wonders of the ancient silk road. 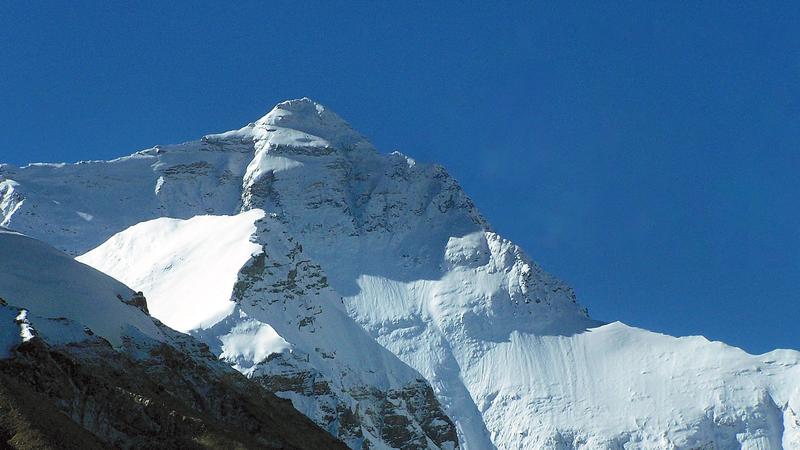 Located in Subei Mongolian autonomous county, Gansu, Laohugou glacier No 12 is the largest valley glacier in the Qilian Mountains and has been the focus of pioneering glacier field observations. (PHOTO PROVIDED TO CHINA DAILY)

Last month, a railway linking Dunhuang, Gansu province, and Golmud, Qinghai province, officially went into full operation. Along the 671-kilometer route, trains can give you a front-row seat to view the moving sands of the Kumtag Desert and the snowcapped Qilian Mountains, among other stunning landscapes. There are 25 stations along the line.

The railway crosses Qilian Mountains through a tunnel stretching more than 20 kilometers.

The railway intersects with existing lines, including the Lanzhou-Qinghai Railway, Qinghai-Tibet Railway and Lanzhou-Xinjiang Railway, to form the first circular railway network in the northwestern region.

The railway from Dunhuang was extended south into Qinghai, connecting Dunhuang to Subei, Mahai and Yinmaxia near Golmud on the Qinghai-Tibet Railway.

Construction of the Dunhuang Railway started in December 2012, with a total investment of 13.48 billion yuan (US$1.94 billion).

The single-track electrified line is designed for speeds up to 120 km per hour and freight trains of up to 4,000 metric tons, with provision for future double tracking.

China State Railway Group said the line will be of great importance for the rail network in western China and will also play a role in the Belt and Road Initiative global development drive.

"Based on the Dunhuang Railway, we are able to promote high-quality, circular train tours in West China," Fu Qingzhong, an official of a travel service affiliated with the China State Railway Group, told Xinhua News Agency. 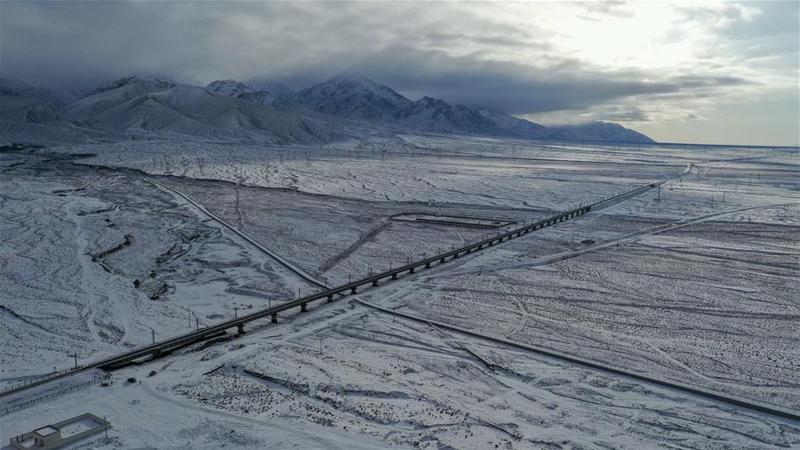 A railway bridge near the Da Qaidam Station on the Dunhuang-Golmud line. (ZHANG LONG / XINHUA)

As a major stop on the ancient Silk Road, the historic trading network linking East and West, Dunhuang is best known for the Mogao Grottoes, which cover a large expanse of Chinese history, including the golden age of the Tang Dynasty (618-907).The relics there were inscribed on the UNESCO World Heritage list in 1987, one of the earliest listed sites in China.

In ancient times, the oasis city in the Gobi desert, at the far western limit of traditional Chinese settlements along the Silk Road, was the first trading town encountered by foreign merchants entering Chinese territory from the west.

In the early 1970s, Dunhuang's importance as a trading hub had been largely lost due to a lack of good transportation infrastructure.

Thanks to increasing investment in infrastructure projects, the city saw robust growth and development in tourism last year. It received more than 13.37 million trips in 2019, generating nearly 15 billion yuan (US$2.15 billion) in tourism revenue, according to the latest statistics from the local cultural and tourism authority.

In 2005, the number of visitor arrivals to the city first passed 1 million.

Amid a growing influx of tourists from both home and abroad, local authorities have expanded Dunhuang airport and accelerated construction of railways and highways. The 976-million-yuan expansion project on the Dunhuang airport enables it to handle an annual capacity of 960,000 passengers and 1,700 metric tons of cargo.

All of these things will help to provide a better experience for visitors.

Highlights of the trip

While the entire length of the Dunhuang Railway is an exceptionally scenic ride through the Qilian Mountains and Gobi desert, there are nine extraordinary scenic spots along the way. 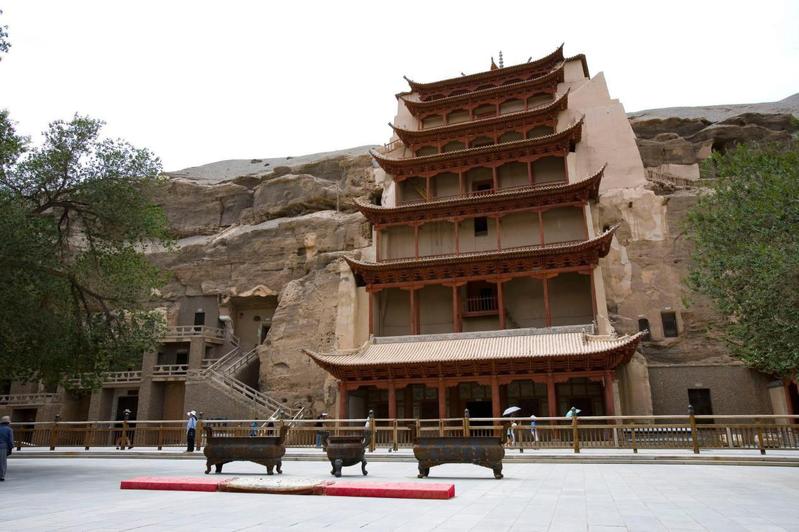 Sitting in Dunhuang, the Mogao Grottoes are home to a priceless collection of Buddhist artwork. The 1,650-year-old UNESCO World Heritage site boasts more than 2,000 sculptures and 45,000 square meters of murals housed in 735 caves carved into the cliff face. Digging of the site began in 366.The artifacts there symbolize the great achievements of China's Buddhist art from the fourth century to the 14th century.

The Great Wall of Han Dynasty (206 BC-AD 220) in Dunhuang was an important construction for both frontier safety and cross-border trading, made by piling up sand and weeds. Over the past 2,000 years or so, many parts of it have been lost to erosion, but the remaining sections still reflect traces of the original wall. Built from a mixture of sand, dry dirt, rose willow, reed and apocynum, the wall spans 136 km from the Northern Lake in the east to Mamitu, bordering Xinjiang in the west.

Located in Subei Mongolian autonomous county, Gansu, Laohugou glacier No 12 is the largest valley glacier in the Qilian Mountains and has been the focus of pioneering glacier field observations. It is a major water source for the Hexi Corridor, part of the ancient Silk Road. Despite its rapid recession as a result of climate change, it is still an impressive sight. 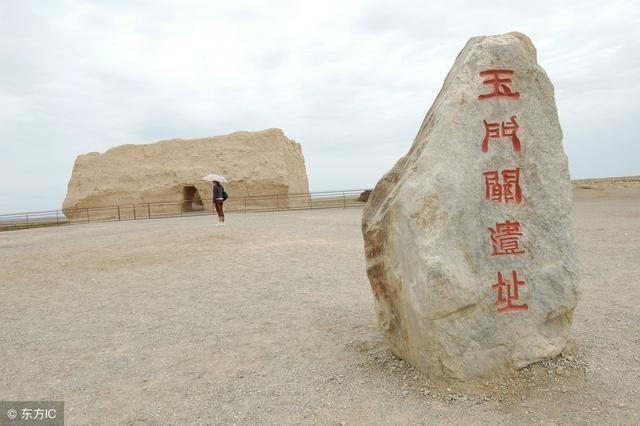 Yumen Pass is located in the Gobi Desert, about 90 km northwest of Dunhuang and was a strategic point on the ancient Silk Road. It served as an important passage for jade from the western regions. The parapets of the pass still remain, in square rammed-earth structures.

About 180 km northwest of Dunhuang, Yadan National Geological Park occupies an area of about 398 sq km and is the largest yardang landform found so far. Yardang are unique landforms, carved from bedrock or formed through erosion, that look like ridges, towers or dunes that protrude from the floor of extremely arid regions. The park is also called Devil City, because visitors describe the noise of the strong wind whistling between the Yardang as sounding like the devil screaming. The area is great for hiking. 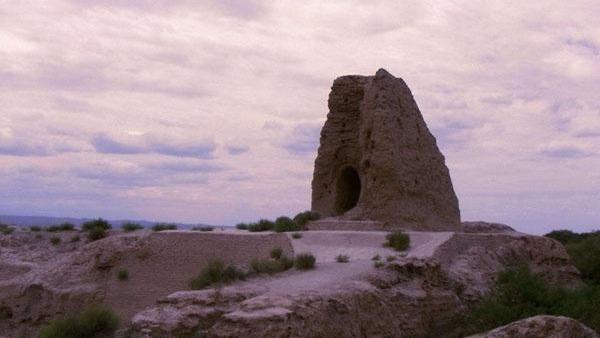 Founded more than 2,000 years ago, Suoyang City was an important landmark on the ancient Silk Road, and one which held a key role in the politics and the economy of the area during the Western Han Dynasty (206 BC-AD 24). Located in Guazhou county, Gansu, Suoyang Ruins is one of the largest and most well-preserved ancient sites in China with the city's defense structures still standing and its irrigation system in good condition.

Located in the Kazak autonomous county of Aksay, Gansu, the Big Sugan Lake covers an area of about 101 sq km. The lake is known as a paradise for migrant birds and, as well as keeping tabs on the avian inhabitants, visitors can also experience the feeling of roaming the nearby grassland on horseback like true Kazaks. 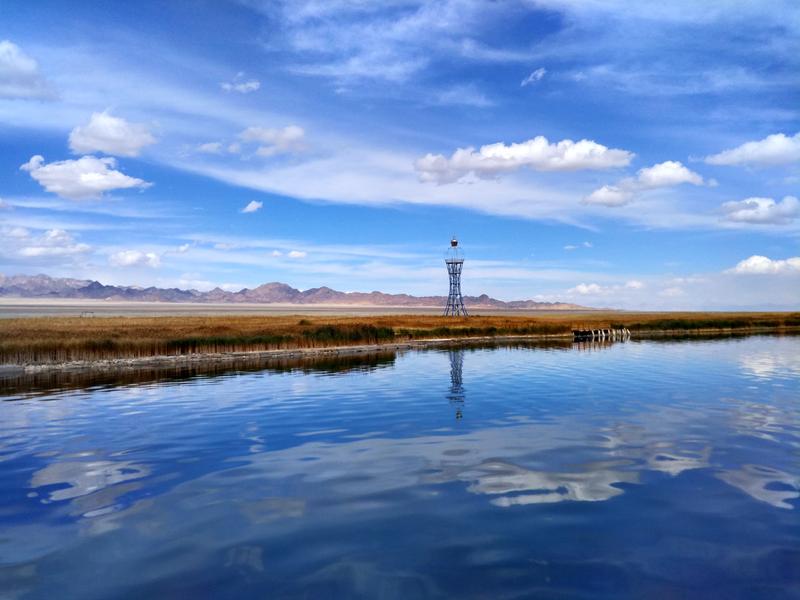 Da Qaidam Salt Lake in northern Qaidam Basin in Qinghai province is known for its liquid and solid boron resource. More than that, pinnoite-rich sediments that occur in the lake, are a global rarity.

Mount Kunlun Global Geopark is 90 km from Golmud city, Qinghai. It covers an area of 1,403 sq km. The park is endowed with abundant geological attractions that provide evidence of complicated crustal movements and ocean-land conversions. With magnificent glacial and permafrost landforms, it is an ideal place for research on landscapes. Tibetan gazelle, goat antelope, wild yaks, argali sheep, blue sheep and ibex can be found spread throughout the range.