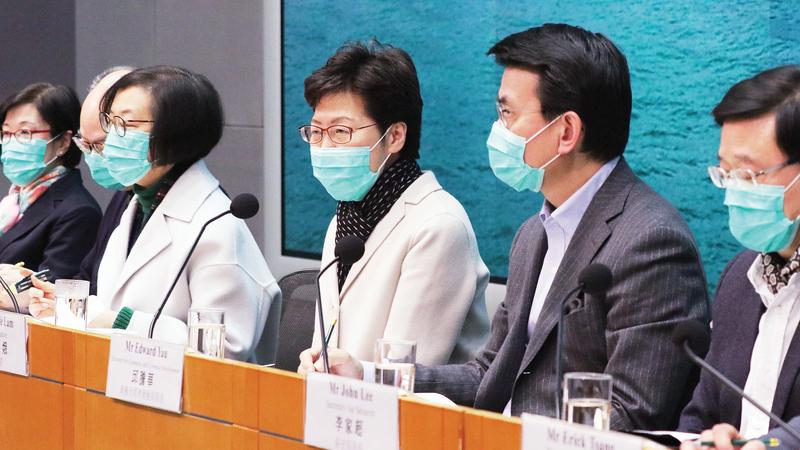 The Hong Kong government is temporarily closing six of the city’s 14 immigration checkpoints and cutting in half the number of flights to and from the Chinese mainland in an effort to halt the spread of the novel coronavirus that started in Wuhan, the capital city of Central China’s Hubei province.

Effective Thursday, six immigration checkpoints in the city, including the ones at the city’s high-speed rail station and Hung Hom Station, will be closed indefinitely

At a news conference on Tuesday, Hong Kong Chief Executive Carrie Lam Cheng Yuet-ngor also said that the central government has approved stopping issuing new endorsements under the Individual Visit Scheme from Tuesday. The program, which allows residents of 49 mainland cities to visit Hong Kong and Macao without being part of a tour group, has been suspended for Macao as well.

Effective Thursday, six immigration checkpoints in the city, including the ones at the city’s high-speed rail station and Hung Hom Station, will be closed indefinitely. Passenger traffic at Sha Tau Kok, Man Kam To, the China Ferry Terminal in Tsim Sha Tsui and the Tuen Mun Ferry Pier also will be suspended, Lam said. The closure applies only to passenger services. Cargo transport at these ports remains normal. Cross-boundary shuttle bus service via the Hong Kong-Macao-Zhuhai Bridge and Sha Tau Kok will be reduced, Lam said.

The further-tightened measures came a day after the special administrative region government started imposing immigration restrictions on Hubei residents and non-Hong Kong residents who have visited Hubei in the past 14 days.

Visitors under the Individual Visit Scheme account for half of Hong Kong’s total visitors each year. Meanwhile, to avoid further spreading of the epidemic, the mainland has already suspended all outbound or domestic tourist groups.

Some 200 Hong Kong residents are still in Hubei as most of the cities in the province remain locked down, Lam said, adding that the SAR government’s office in Wuhan was maintaining contact with the residents. She said the SAR government was in talks with the central government so that arrangements could be made to bring these residents back home.

Lam urged Hong Kong residents not to visit mainland cities with confirmed cases of infection, and urged those still on the mainland to return home as soon as possible. She appealed to residents who have been to the mainland in the past 14 days to stay at home, if possible, for two weeks upon returning to Hong Kong, and wear a face mask if they need to go out.