Brazil must be at best to beat Croatia, says Danilo

DOHA - Brazil must be at their best to beat Croatia when the teams meet in their FIFA World Cup quarterfinal here on Friday, according to defender Danilo.

"We are only sure of one thing: against Croatia, the best possible Brazil must appear, the best Brazil of this World Cup," Danilo told a news conference.

Danilo said he was hopeful that Juventus teammate Alex Sandro, who suffered a hip problem in Brazil's second Group G fixture against Switzerland, would recover in time for Friday's game

"Croatia was a finalist in the last World Cup, they have an experienced base of good players, with a lot of temperament and ambitions to win. There is only one method to beat them, and that is to reach our best possible version."

Danilo said he was hopeful that Juventus teammate Alex Sandro, who suffered a hip problem in Brazil's second Group G fixture against Switzerland, would recover in time for Friday's game.

In the event Sandro is ruled out, Danilo said he could stand in at left-back.

"I can play on the left or on the right, a little further forward or a little behind," said the 31-year-old, who returned for Brazil's 4-1 win over South Korea in the round of 16 after missing the previous two games with an ankle injury. 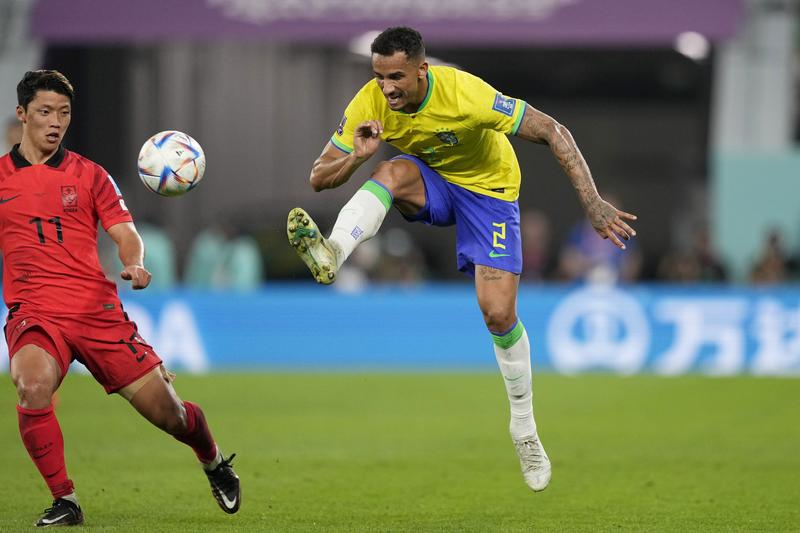 Brazil's Danilo (right) takes a shot next to South Korea's Hwang Hee-chan (left) during the World Cup round of 16 soccer match between Brazil and South Korea, at the Stadium 974 in Doha, Qatar, Dec 5, 2022. (MARTIN MEISSNER / AP)

"I have played different positions under different schemes at Manchester City and at Juventus. The coach tries to get the best out of us and looks for that versatility in each one."