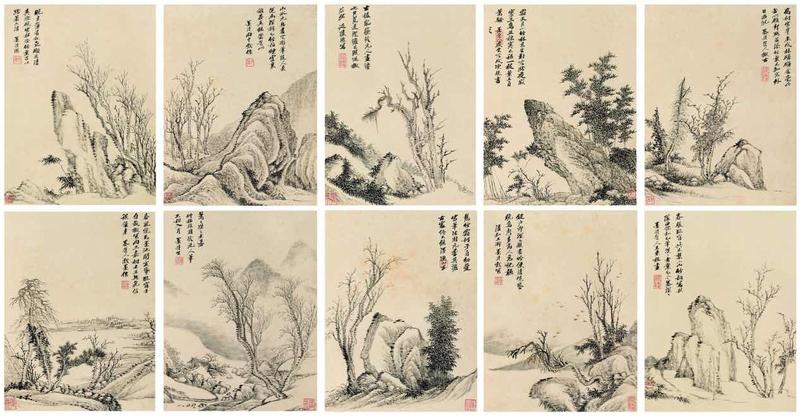 The Long Museum in Shanghai is presenting some of its finest traditional Chinese artworks at the ongoing exhibition titled The Era of Brilliant Stars — Masters from Early Qing Dynasty Painting and Calligraphy.

The latest in a series of exhibitions celebrating the Long Museum's 10th anniversary, the showcase opened on Sunday and features the works of 10 Chinese artists who were active in the 17th century.

It features a total of 33 sets of artworks, half of which are on public display for the first time.

Among the six masters, Wu had quite a unique life experience as a Catholic priest. His paintings combined elements and techniques from Chinese classical masters, as well as Western aesthetics, making him an interesting figure for the research about exchanges and integration between Chinese and Western art.

The four monks: Hongren (1610-63), Kuncan (1612-92), Bada Shanren (1626-1705) and Shitao (1630-1724) are sometimes referred to "four monks of the early Qing Dynasty", as they represented more individualized styles and drew inspiration from nature and the spiritual world. Although these four didn't enjoy as much prominence as the six masters, their influence lingered on through the centuries and they influenced many modern Chinese painters, such as Ren Bonian and Qi Baishi, says Xie.

Together, these artists brought traditional Chinese art to new heights and created an era of unprecedented prosperity, says Liu Yiqian, the founder of the private museum in Shanghai.

An expert of these 17th-century masters, Liu wrote the foreword for the exhibition. "It's been almost 30 years since I started to collect ancient Chinese paintings and calligraphy," he writes. "I have a particular fondness for works by the four Wangs, Wu Li, Yun Shouping and the four monks. As a matter of fact, it's not exaggerated to call such fondness fanatic."

In 2005, Liu put the artwork up for auction in support of the newly established Beijing Council International Auction company. The painting was sold for 2.5 million yuan.

"If we considered it from the perspective of input-output ratio, you could say it was an incredibly good investment," he says.

Two years ago, he saw the painting again on auction, and bought it back for 8 million yuan.

"Back then I didn't have so much understanding of these artists or their work, so it is normal to make mistakes in your journey of life," he explains.