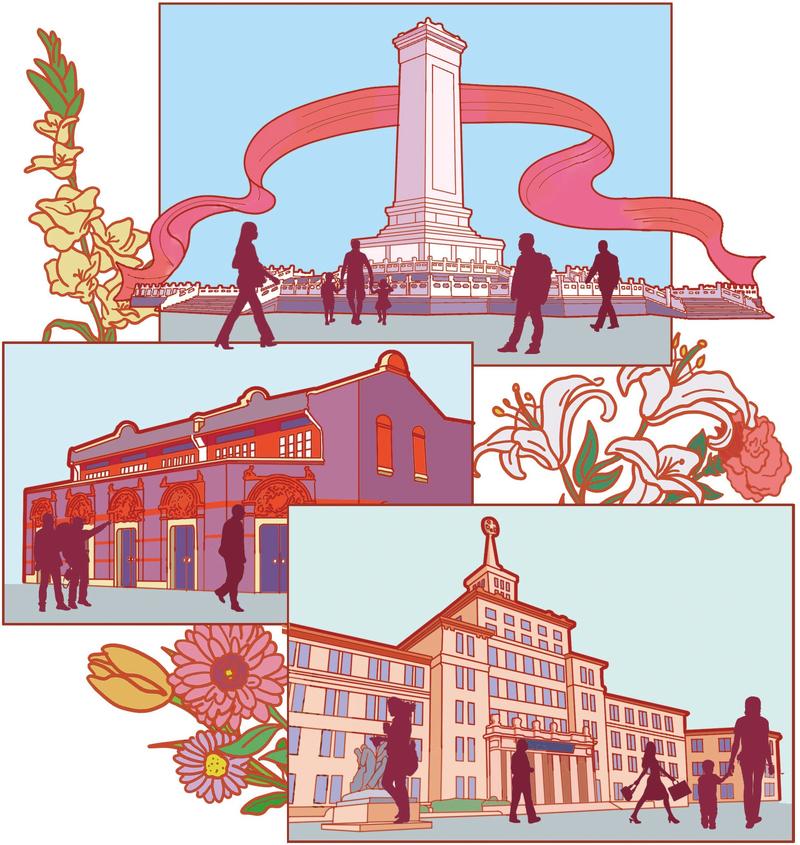 "Red tourism", a subset of tourism in which people visit locations and memorials of historical significance to the Communist Party of China, has given a much-needed shot in the arm of the domestic tourism industry in summer. And many believe red tourism will bloom further during the National Day Golden Week holiday.

Red tourism is not only about the joy of visiting a new place and taking in the wonderful sights. It is also about gaining knowledge about history and being inspired by the stories of the people who contributed to the founding of the People's Republic in 1949 and worked for the wellbeing of the Chinese people.

By rediscovering history and passing on the stories of the Chinese revolution and its heroes to the next generations, people can uplift their spirit.

Red tourism can also be used as a leverage to revitalize rural areas because most of the revolutionary bases and red tourism sites are in the countryside. By exploiting such sites to raise the incomes of rural residents, the authorities can create a new driving force for integrated rural development. Since red tourism is a labor-intensive sector involving catering, accommodation, entertainment and other related businesses, which creates jobs and helps increase farmers' incomes, it can boost local development.

Ctrip data show that in the first half of 2022, more than 30 percent of all tourists visited red tourism sites in rural areas, which was 10 percent more than the previous year. Yet red tourism faces certain developmental problems, mainly because some local government officials have failed to make the best use of red tourism resources for economic development.

In fact, some local departments have adopted a cavalier attitude toward research, restoration and conservation of former revolutionary bases. Disputes over resources, projects and ownership between different departments and jurisdictions are not uncommon either, owing to the lack of unified planning. Superficial descriptions of some historical figures, organizations and past events at different red tourism sites lessen the importance of the sites and leave visitors flabbergasted.

To better develop red tourism, local governments also need to build infrastructure that merges with the surroundings and is coherent with the red tourism sites in rural areas. Improving supporting infrastructure and services including ensuring undisrupted water and electricity supply, and providing smooth transport and telecommunication services will make the red tourism sites in the countryside even more attractive.

While the historical and spiritual value of red tourism should be highlighted with the help of scholars and experts, the management and staff training at tourism sites should be strengthened. For example, tourism officials should conduct on-the-spot investigation and learn from well-run sites to improve their own services.

Red tourism sites also need more professional planning. The tourism authorities, for instance, could consider integrating cross-regional and cross-provincial sites associated with the Long March and the Chinese People's War of Resistance Against Japanese Aggression (1931-45) to better develop red tourism. They could also consider developing a "red plus tourism model" based on local conditions and by incorporating local characteristics to enrich the experience of tourists.

And while digital technology can be used to offer virtual tours and panoramic displays of red tourism sites to the people and new media platforms can help promote and market derivative products, supportive policies are needed to ensure the steady and healthy development of red tourism.

The author is deputy director of the international exchanges office at Beijing Language and Culture University.