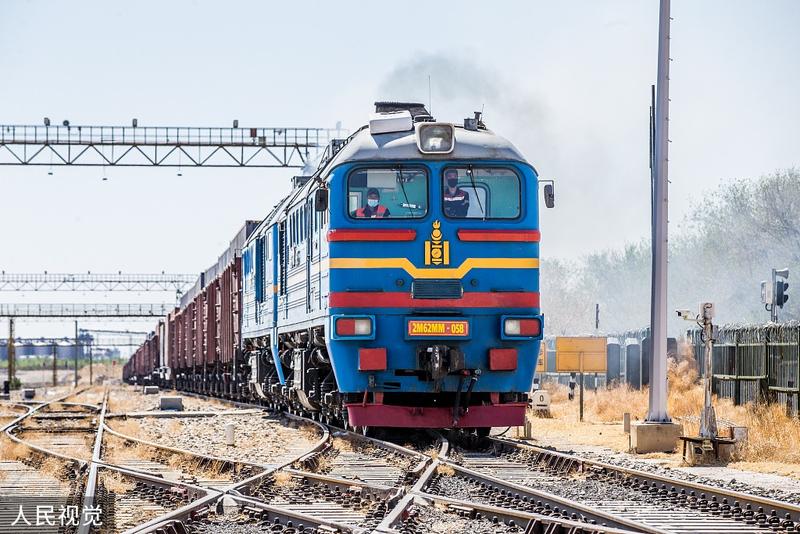 The meeting Chinese President Xi Jinping, Russian President Vladimir Putin and Mongolian President Ukhnaa Khurelsukh held on the sidelines of the 22nd Meeting of the Council of Heads of State of the Shanghai Cooperation Organization in Samarkand, Uzbekistan, on Sept 15, was significant, not least because it was the first such meeting since the COVID-19 pandemic broke out.

The three leaders reaffirmed the "Outline of the Development Plan on Establishing the China-Mongolia-Russia Economic Corridor" which the three sides signed in 2016, and later extended by five years. In particular, they launched a feasibility study on the upgrading and development of the central-route railway of the economic corridor, and agreed to actively move forward with the project of constructing a gas pipeline from Russia to China through the Mongolian territory.

The meeting set a new direction for China-Mongolia-Russia economic and trade cooperation, which will create new opportunities for the three sides and consolidate their partnerships in various fields.

However, the three countries also need to deepen political trust, reiterate that they will respect each other's core interests, and better coordinate their response to regional and international issues, in order to enhance their comprehensive strategic cooperative partnerships amid the complicated geopolitical situation.

China and Russia are big countries with global influence. On June 5, 2019, the two countries decided to upgrade their relationship to a "Comprehensive Strategic Partnership of Coordination in the New Era", taking their strategic partnership to the highest level.

As for Mongolia, it plays an important role in China's neighborhood diplomacy, that is based on "amity, sincerity, mutual benefit and inclusiveness", with commitment to consolidating the traditional Sino-Mongolian friendship, deepening mutually beneficial cooperation, and elevating the bilateral comprehensive strategic partnership to a new level.

In the short term, though, China, Mongolia and Russia aim to follow through on the consensus they reached on the construction of the China-Mongolia-Russia Economic Corridor and deepen trade and economic cooperation.

In the long run, however, the three sides' goal is to integrate trilateral trade to achieve common prosperity and implement the Global Development Initiative and Global Security Initiative.

Increasing the trade volume in the short term and building a regional community with a shared future in the long run signify a qualitative change, which will play an important role in regional and global affairs and help the three sides to oppose unilateralism and uphold multilateralism.

The three countries also need to further synergize China's Belt and Road Initiative with Russia's Eurasian Economic Union and Mongolia's Steppe Road Plan, while promoting the development of the China-Mongolia-Russia Economic Corridor by accelerating the implementation of large-scale energy and infrastructure projects.

The development and upgrading of the economic corridor's central-route railway will open up more possibilities for the coordinated development of China, Mongolia and Russia. The central-route railway, which refers to Trans-Mongolian Railway, plays a key role in the three countries' endeavor to jointly build the economic corridor. But the outdated single-track railway needs to be upgraded to meet the three sides' trade demands and help consolidate the trilateral partnership.

The construction of a gas pipeline from Russia to China through Mongolia as proposed may become a milestone in the economic corridor, because Russia is an important oil supplier and the second-largest pipeline natural gas supplier for China.

Moreover, since Russia has been forced to stop the supply of natural gas to Europe through the Nord Stream 2 pipeline, the opening of a new China-Russia natural gas pipeline through Mongolia would be beneficial to Russia too. The new Russia-China gas pipeline will also help boost energy cooperation among the three countries, as according to reports, the project will increase the total amount of energy supplied by Russia to China and Mongolia by 20 percent — delivering an additional 50 billion cubic meters of natural gas to China every year.

The upgrading and development of the economic corridor's central-route railway and the Russia-China gas pipeline through Mongolia will boost Mongolia's status as a transit and logistics hub and help it further integrate into the trilateral regional trade mechanism — a goal Mongolia has been aiming to achieve for a long time.

This is important because after the United States and its allies, especially European allies, imposed the severe economic sanctions on Russia following the Russia-Ukraine conflict, Russia has been promoting the "de-dollarization" of foreign trade, especially asking countries and regions antagonistic to Russia to settle the payment for importing Russian oil and gas in roubles.

Russian President Vladimir Putin said on Sept 7 that China will pay Gazprom for its gas in national currencies, based on a 50-50 split between the Russian rouble and Chinese yuan.

If the Russia-China gas pipeline through Mongolia is constructed, it may promote the settlement of trilateral trade in Chinese renminbi, Russian rouble and Mongolian togrog, and help build a strong regional financial security bulwark and boost trilateral trade cooperation.

Meng Gencang is a professor at the China Research Center for Northeast Asian Languages, Dalian University of Foreign Languages; and Bayasakh Jamsarn is a state merit professor at and former director of the Institute of International Affairs, Mongolian Academy of Sciences.