By Li Yingqing in Kunming and Chen Meiling 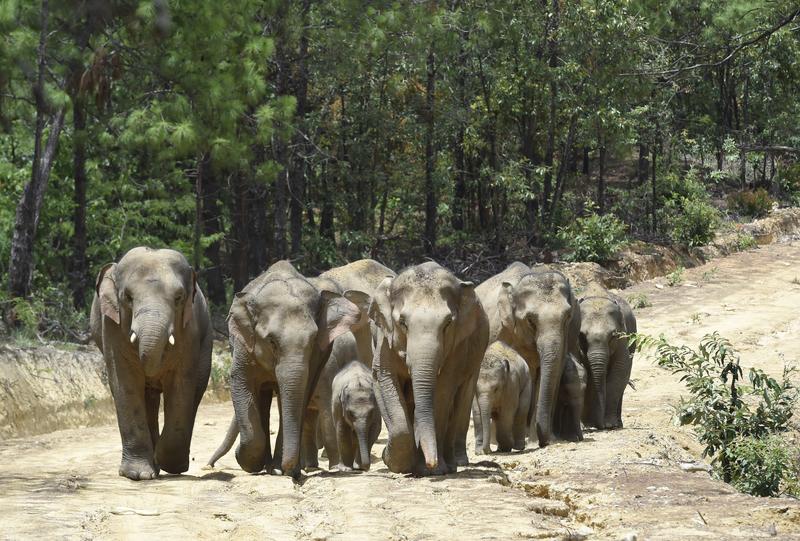 Bao Mingwei, 42, a senior veterinarian at an elephant reserve in Yunnan province, thinks he knows the secret of his innate ability to attract the giant creatures. "Maybe I just smell like them," he said.

"Sometimes I have to stand in the elephants' dung, while other times my clothes are stained by them. We vets are also at risk of being attacked," said Bao, who has worked at Wild Elephant Valley in the Xishuangbanna Dai autonomous prefecture for 22 years and is known as an "elephant doctor".

In March last year, the story of a group of wandering Asian elephants made news around the world.

Three months later, a young male elephant left the herd and wandered alone for about 30 days. To ensure its safety, Bao anesthetized the animal and took it to the Xishuangbanna National Nature Reserve. It was the first case in China of a wild elephant being taken back to its habitat after roaming over a long distance.

"There is scant material to refer to when rescuing elephants. Most of the time, we rely on our experience," Bao said.

Bao followed the elephant for 33 days, estimating its weight by observing the animal's physique, teeth and footprints in order to administer the correct dose of anesthetic. 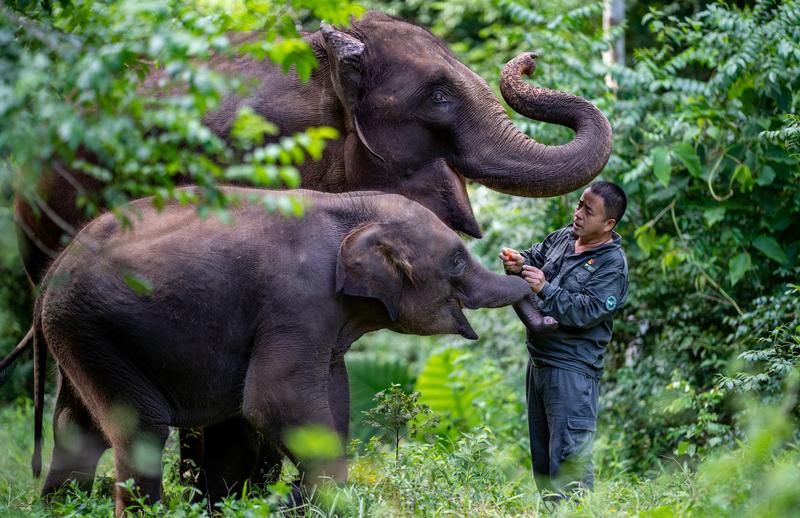 On Aug 8 last year, more than 10 elephants returned to their habitat in the Mengyang area of Xishuangbanna National Nature Reserve after wandering for 1,300 kilometers in about 110 days. Tens of thousands of people helped track the animals' movements and guide them home.

Chen Fei, director of the Asian elephants research center at the National Forestry and Grassland Administration, said the herd has separated into two groups, one of which has joined a large family of elephants.

"This means that in general the elephant population is healthy and that there are frequent exchanges between herds," Chen said.

He added that an elephant calf born at the reserve is doing well.

The Asian elephant, the continent's largest land mammal, is native to a total of 13 countries and regions. There are estimated to be 40,000 to 50,000 of the animals in the world. In China, the species is a first-class protected wild animal, and is found mainly in Xishuangbanna, Pu'er and Lincang, Yunnan.

Despite the population of Asian elephants falling over the past 30 years, the number of the animals in China rose to about 300 by the end of last year, meaning that the relationship between humans and the elephants had become more harmonious, according to experts.

Chen said: "The number has risen by about 100 over the past decade. Individual young elephants are also being observed more frequently." 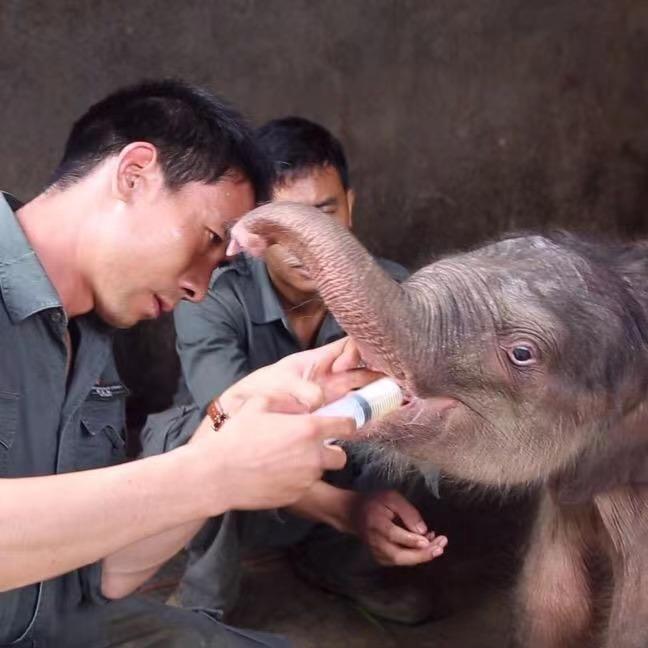 A breeder feeds a calf at the Xishuangbanna reserve. (WANG YUHENG  /FOR CHINA DAILY)

Xiangyanqing village, located on the perimeter of the reserve, is often visited by the elephants. Villager Duan Zhongming said, "They ate corn at our home, and we had to hide upstairs."

In 2017, one of China's first pilot projects to prevent attacks from elephants was launched in the village, where barriers were erected to keep the animals out. Now, an 800-meter guardrail surrounds the village to protect residents. Tourism is also being developed locally.

Conflict between humans and elephants is not uncommon in Asian countries such as Sri Lanka and India.

In Yunnan, a monitoring and alert system tracks elephants' movements. Infrared cameras and drones are also used for this work. To avoid coming into contact with the animals, residents receive real-time messages detailing the elephants' locations through an app, social media and radio.

On July 31, elephant observer Diao Faxing, 47, woke at 5 am to examine footage from a drone. He confirmed that every elephant herd in Dashujiao village, Jiangcheng county, Pu'er, was at a safe location. Diao then sent a voice message to the village's WeChat group, and after hearing that the elephants were in a safe location, residents set out to start farmwork.

During the day, Diao and his colleagues monitored the elephants and informed villagers of the animals' movements. They also observed the elephants' health.

Diao said the number of elephants near the village is rising, and the animals are developing closer bonds with the locals, which is causing problems.

"Elephants used to hide in the woods during the day, coming out to feed at night when villagers were at home. Now, the animals wander in the village during the day, and residents are no longer afraid of them. We have to remind them to keep a safe distance," he said.

Diao is one of 64 observers in Pu'er contributing to a 24-hour alert system. He and his colleagues follow the elephants in vehicles, bringing along drones, sleeping bags, clothing and simple stoves. They go to sleep around 1 am, sometimes in villagers' homes.

Information obtained about the elephants is uploaded to an app developed in the county.

Diao was a truck driver before becoming an observer－a job he was initially attracted to out of curiosity, but which he now feels has great significance.

An elephant herd once visited a tea plantation where an elderly man was working. The man, who had difficulty hearing, had not received a message about the elephants on WeChat. After seeing that the animals were just 10 meters from the man, Diao quickly escorted him to a safer place. 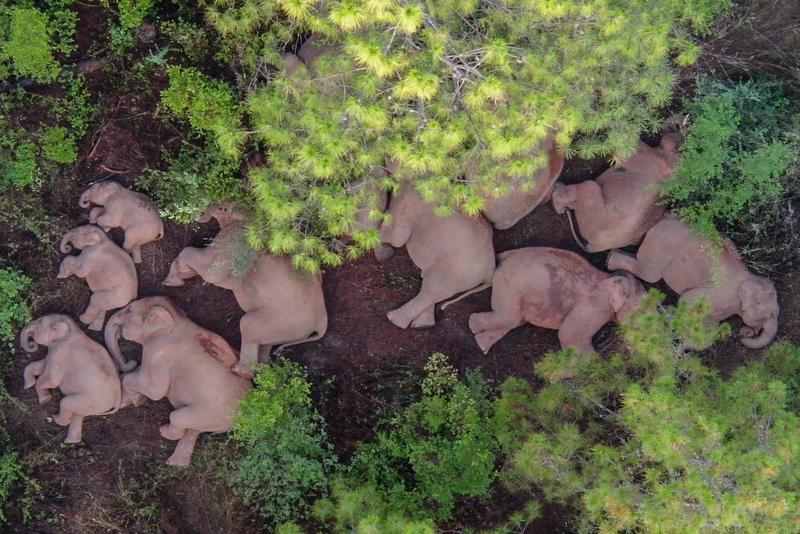 Wandering elephants take a rest after arriving at Yimen county, Yuxi, on June 13 last year. The herd returned to its habitat in Xishuangbanna after roaming for 1,300 kilometers in about 110 days. (PHOTO / XINHUA)

Diao said that in an ideal scenario, humans and elephants would live together harmoniously. "The hope is that the animals and humankind can develop a better relationship," he added.

However, the monitoring and alert system still does not offer adequate protection for villagers' property. The elephants favor 400 types of food, compared with about 100 varieties in the 1980s. They are especially fond of corn, rice and sugarcane, according to Guo Xianming, director of the reserve's scientific institute.

In Bajiaoqing village, Yuxi, Yunnan, after a large quantity of corn grown by villager Qin Zhihui was damaged by elephants, insurance worker Chen Bin was called in to assess the losses.

Chen Bin said GPS was used to estimate the area of farmland damaged by the animals, and Qin received compensation of 1,932 yuan for his 0.19 hectares of corn. The claim was settled within a week.

In 2014, such insurance cover was extended throughout Yunnan. Over the past decade, compensation totaling 173 million yuan has been paid in cases involving elephants.

Dao Fachang, 40, a resident of Dadugang village, Xishuangbanna, said elephants entered the village in July and August each year to eat corn, rice and fruit. Although his family received compensation from an insurance company for damage caused by the animals, he said it did not cover the losses.

Yan Yonghan, who is responsible for wild animals accident public liability insurance at the Xishuangbanna branch of China Pacific Insurance (Group) Co, said that since 2010, the local government has offered insurance for residents, who don't have to pay the premium.

Premiums and compensation have risen over the years. However, claims are now settled in a week, rather than six months previously, enabling farmers to quickly receive reimbursement and use it in daily life, Yan said.

This year in Pu'er, crops favored by elephants have been planted on 466 hectares of wasteland to meet the animals' demand for food and reduce the chances of them entering villages. Ownership of the land has not changed.

Chen, from the National Forestry and Grassland Administration, said a national park for elephants is being established as part of the measures taken to resolve conflict between the animals and humans. The park will also help promote protection of the species, other endangered creatures, plants and the rainforest.

"The venue aims to restore the Asian elephants' habitat, promote stable and healthy development of the elephant population, enhance its genetic character, and ease tensions between humans and the animals," he said.