By Liu Zhihua and Zhou Lanxu 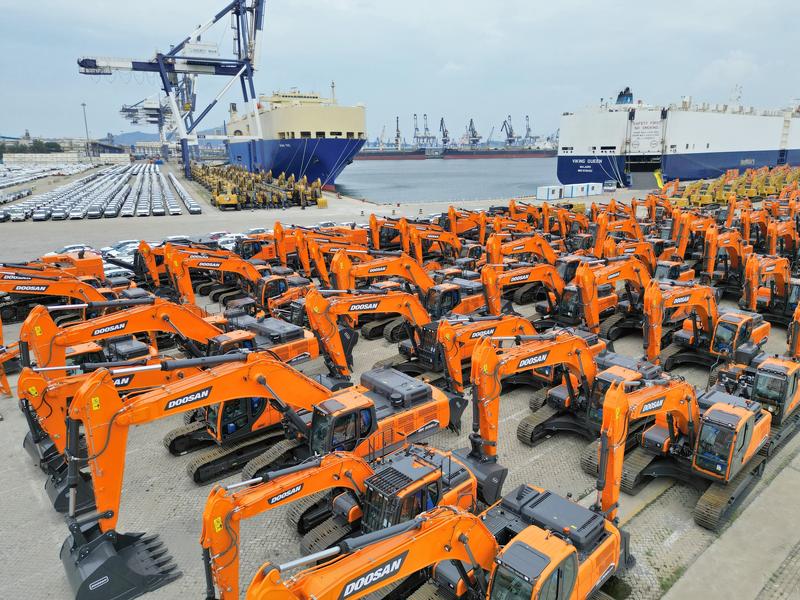 Row upon row of excavators being exported wait to be loaded on Sunday aboard ships that are docked at Yantai port in Shandong province. (TANG KE / FOR CHINA DAILY)

China's foreign trade posted strong growth in July, and the momentum in trade expansion is expected to continue in the second half of the year, industry experts said on Sunday. 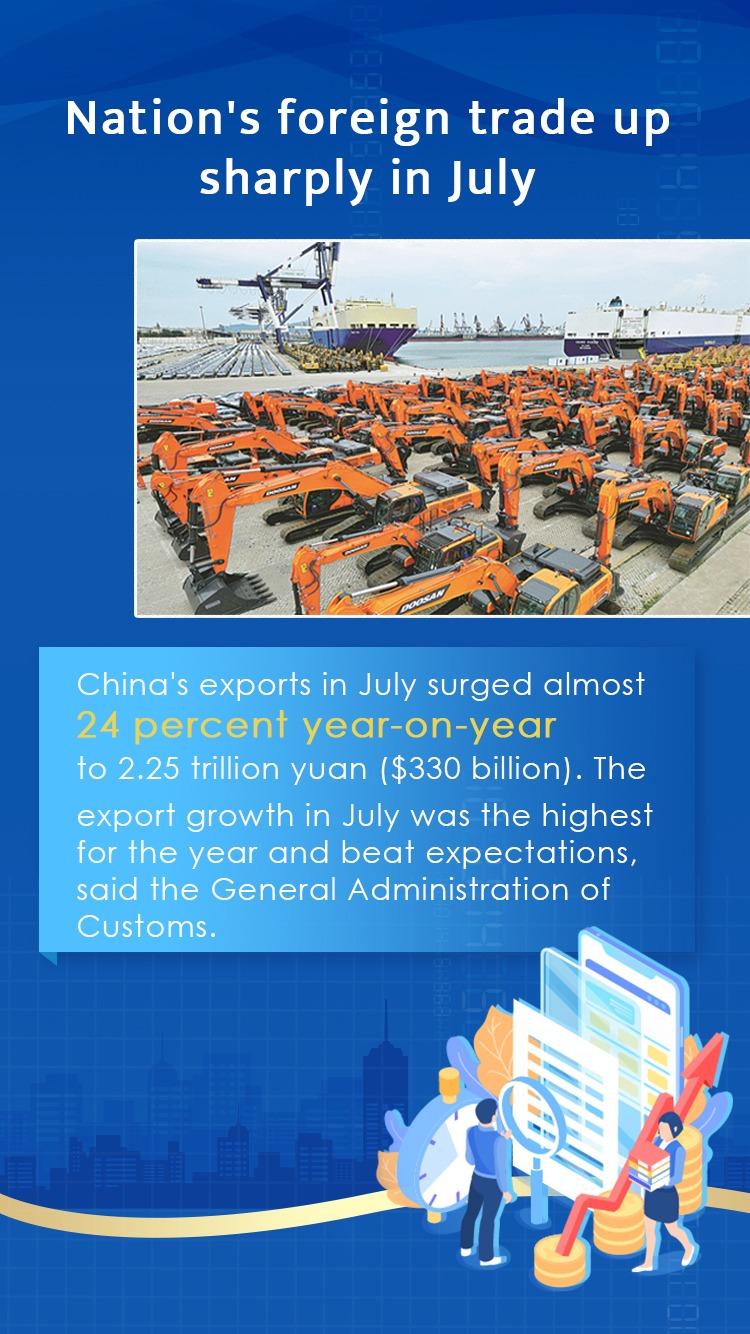 "The fast pace in foreign trade growth has fully demonstrated the competitiveness of China in the sector when its industrial chain gradually restores normal performance," said Zhou Mi, a senior researcher at the Chinese Academy of International Trade and Economic Cooperation in Beijing." The growth is quite remarkable, as it comes amid growing uncertainties in the global economy and trade."

The export growth in July was the highest for the year and beat expectations. It was up about 2 percentage points from the better-than-expected export growth of 22 percent in June.

Many analysts were worried the slowdown in the world's economy would dampen China's export performance. The fresh data will boost market confidence in the nation's foreign trade and economy, the analysts said. 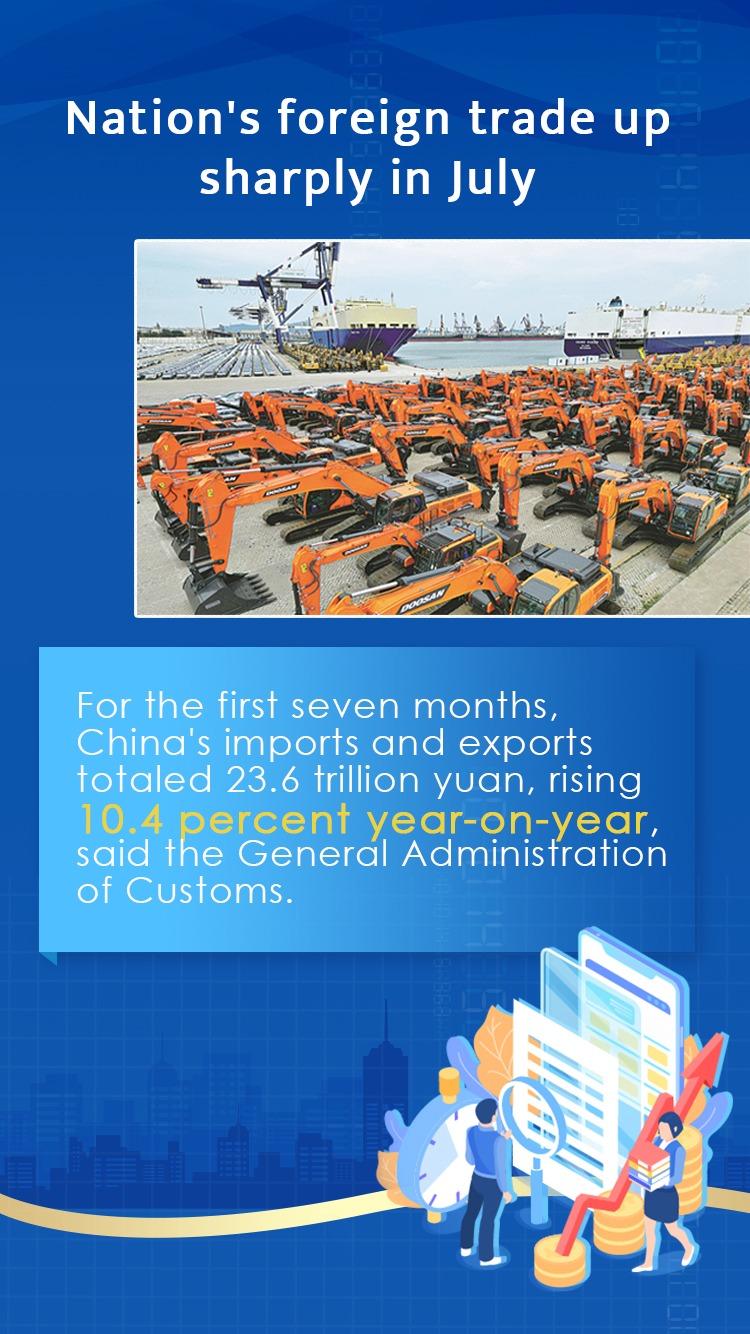 China's foreign exchange reserves stood at $3.104 trillion at the end of July, up $32.8 billion or 1.07 percent from a month earlier, the State Administration of Foreign Exchange said on Sunday.

Analysts said the increase was due to a rise in international bond and stock markets and the resilient trade surplus of the country, which offset a decline in foreign exchange reserves caused by a rising US dollar.

Wei Jianguo, the former vice-minister of commerce, said China's foreign trade will likely grow by double digits in the second half, driven by the nation's economic resilience and rapid recovery.

Imports are likely to log double-digit growth in August or September, while exports will also remain strong, said Wei, who is now vice-president of the China Center for International Economic Exchanges.

Zhou, with the Chinese Academy of International Trade and Economic Cooperation, said the nation's stable foreign trade expansion is mainly attributable to its steady economic and trade cooperation with major trading partners. There is also a growing number of market entities in the foreign trade sector, which he said reflects market confidence in China's foreign trade and will help boost global trade cooperation.

Trade with economies alongside the Belt and Road rose 19.8 percent during the first seven months, while trade with the other 14 members of the Regional Comprehensive Economic Partnership were up 7.5 percent over the same period.

China's trade value in July with the other RCEP members hit 1.17 trillion yuan, up 18.8 percent year-on-year, adding 5.6 percentage points to the nation's overall trade growth in that month.

Li Kuiwen, director of the statistics and analysis department at the General Administration of Customs, said implementation of the RCEP agreement has boosted regional economic and trade cooperation, providing new impetus for the region's recovery and development.

Zhou of the Chinese Academy of International Trade and Economic Cooperation believes that trade potential in the region will be gradually unleashed by the RCEP, which took effect in January.