Region's ties with ASEAN, Greater Bay Area and the new RCEP contributing to its development 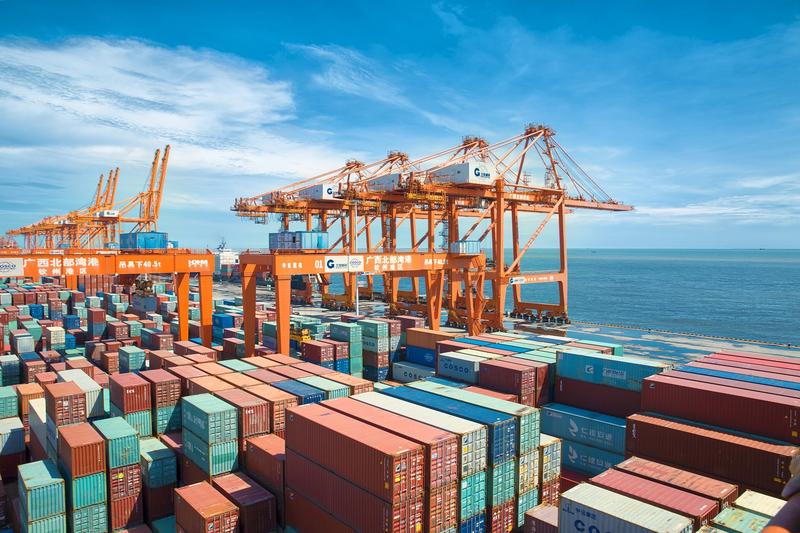 Containers wait to be shipped at a port in the Beibu Gulf in the Guangxi Zhuang autonomous region. (PHOTO PROVIDED TO CHINA DAILY)

These days, huge container ships carrying tens of thousands of metric tons of goods steadily enter and leave the Qinzhou Port in the Guangxi Zhuang autonomous region, creating a bustling scene that was unimaginable about 10 years ago.

"Qinzhou was once just a small village, but after a decade of development, it has become the largest container port in Guangxi and is listed among the top 100 global container ports," said Lin Guan, Party secretary of Qinzhou city. "Achieving this feat in such a short time is quite impressive." 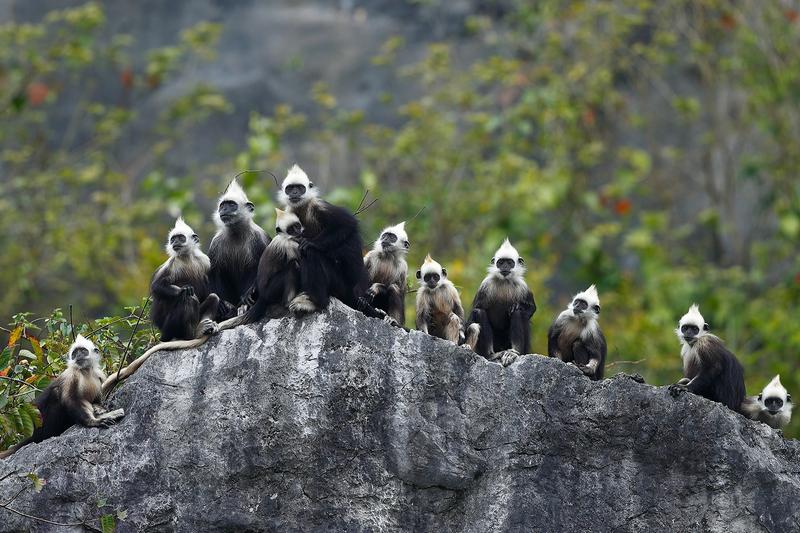 A group of white-headed langurs roost on a karst cliff in Guangxi. (HUANG SONGHE / FOR CHINA DAILY)

Qinzhou's story is just a glimpse of the significant progress South China's Guangxi has made over the past decade in achieving high-quality economic development. The region has capitalized on the relationships it has built with the Association of Southeast Asian Nations and its integration with the Guangdong-Hong Kong-Macao Greater Bay Area to realize prosperity.

The region's GDP stood at 2.47 trillion yuan ($365 billion) last year, more than double that of 2012, according to Liu Ning, the Party secretary of Guangxi who spoke at a recent news conference in Nanning, Guangxi's capital, about the region's achievements over the past decade.

Additionally, Guangxi has made progress in comprehensively deepening reform, expanding opening up and cooperation, and improving its business environment. Great efforts have been made to develop the region's marine economy, and breakthroughs have been realized in the construction of the New International Land-Sea Trade Corridor, a trade and logistics passage jointly built by western Chinese provinces and ASEAN members, Liu said.

The corridor uses ports in Guangxi's Beibu Gulf to reach ports in Singapore and other ASEAN members and links China-Europe freight trains setting off from many western Chinese cities before heading to Central Asia, South Asia and Europe. 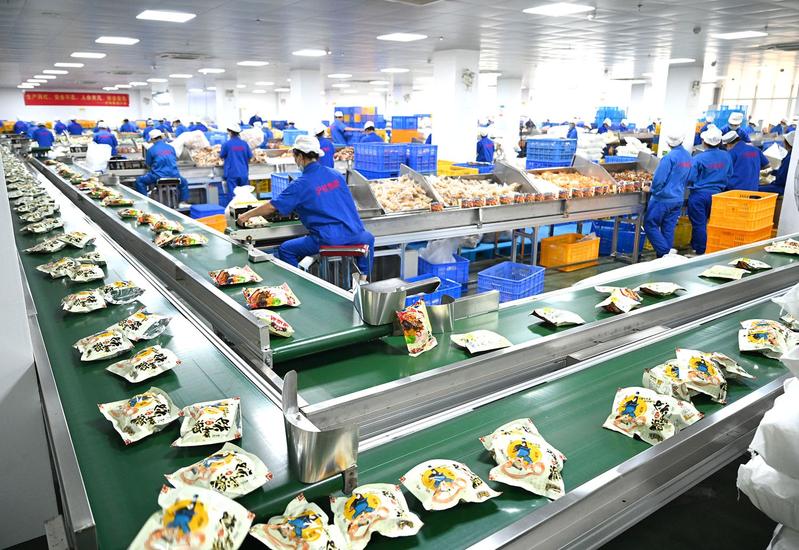 Pingxiang city is known as China's South Gate as it borders Vietnam, and its Youyiguan Port is a convenient land port from the country to Vietnam and other ASEAN members. Over the past decade, relying on its favorable geographical location, the port has adopted measures to boost goods and people flows between China and these nations.

The port has adopted digital technologies to simplify the procedure of customs clearance for passengers and shortened the time to only a few minutes. The volume of passengers cleared by customs annually at Youyiguan has been increasing every year since 2012 and doubled in 2019, official figures said.

Moreover, artificial intelligence and cloud computing technologies have accelerated the passage of freight through the port. Cargo trucks from China and Vietnam can make appointments online in advance. With the online booking system, drivers can avoid peak periods and clear their hauls more quickly and effectively.

With the strengthening of China-ASEAN economic and trade cooperation, the volume of imported and exported goods cleared at Youyiguan has also been increasing annually. 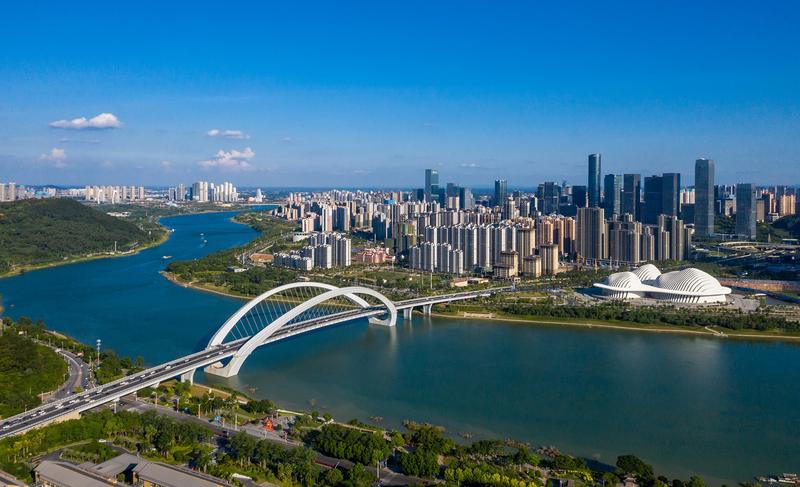 A panoramic view of the Nanning Bridge spanning a river in the capital of Guangxi. (CHEN LIANFEN / FOR CHINA DAILY)

In response to the increases, the port has improved its customs facilities. In 2013, less than 300 vehicles passed through the port per day; that number rose to more than 800 per day last year.

As the main port for ASEAN fruit imports, Youyiguan has also improved the efficiency of customs clearance of the produce amid the epidemic.

"The prices of imported fruits would be quite different if they arrived at domestic markets an hour earlier or later," said Tang Chengwei from the Pingxiang Fruit Chamber of Commerce. "Faster customs clearance at the Youyiguan Port has saved us time and has gained us more business opportunities."

Guangxi has explored its comparative advantages in terms of fostering the new development paradigm and embarking on a path of high-quality development suitable to its characteristics, Lan Tianli, chairman of the region, said at a recent news conference.

"We have developed shipping routes with more than 200 ports in over 100 countries and regions," he said, adding that the number of companies in Guangxi's pilot free trade zone has exceeded 73,000, compared with about 3,800 before its establishment," Lan said. 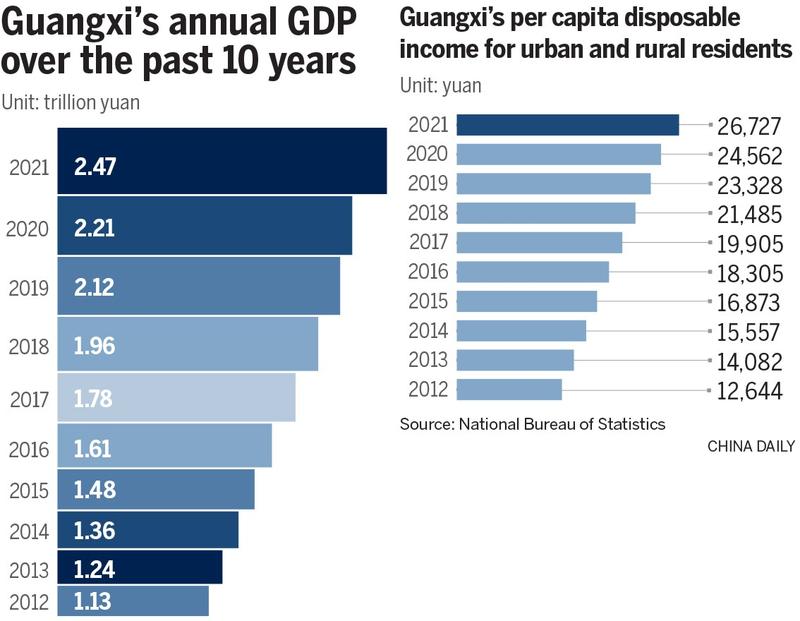 Guangxi has regularly held a series of international events with ASEAN members, such as the China-ASEAN expo and summits. These platforms are now expanding their services to the Regional Comprehensive Economic Partnership member states and countries that are involved in the Belt and Road Initiative, he said.

Liu Ning said that Guangxi will continue to pursue high-quality development through high-level opening up and deepening cooperation with Vietnam, Myanmar, Laos, and other ASEAN members. Guangxi's total trade volume with ASEAN increased from 74.8 billion yuan in 2012 to 282 billion yuan last year, with an average annual growth rate of 15.8 percent.

On Jan 1, the day when the RCEP took effect, Guangxi launched China's first international freight train to member countries. In the first half of this year, Guangxi's total exports to Japan and South Korea, both RCEP members, increased by 44.6 percent and 18.8 percent, respectively.

"After the implementation of the RCEP, the tariff rates of white card stock paper exported to Thailand, Singapore, Laos, Japan and other places were immediately reduced, which added confidence for us to further expand exports and widen trade chains," said Zhao Huayong, purchasing manager of Guangxi Sun Paper.

Liu said that Guangxi will fully synergize its development with that of the Greater Bay Area and accelerate its integration with the region.

Lan said that Guangxi has also attached great importance to the environment, culture and tourism sector to achieve high-quality development.