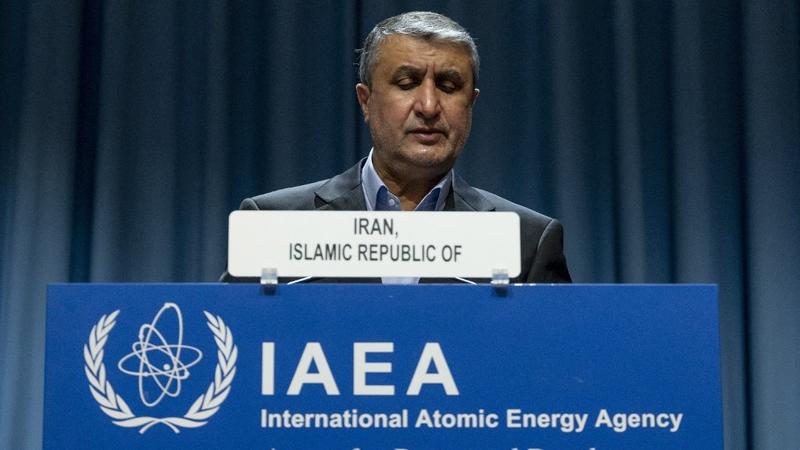 Chief of the Atomic Energy Organization of Iran Mohammad Eslami looks down as he delivers a speech during the International Atomic Energy Agency General Conference, an annual meeting of all the IAEA member states, at the agency's headquarters in Vienna, Austria on Sept 20, 2021. (JOE KLAMAR / AFP)

TEHRAN - The Iranian nuclear chief said his country will not turn on the surveillance cameras of the International Atomic Energy Agency (IAEA) installed within the framework of a 2015 nuclear deal until parties resume honoring their commitments under the deal.

Mohammad Eslami, president of the Atomic Energy Organization of Iran (AEOI), made the remarks in an address to reporters on the sidelines of an exhibition in Tehran on Monday, the official news agency IRNA reported.

Mohammad Eslami, president of the Atomic Energy Organization of Iran (AEOI), made the remarks in an address to reporters on the sidelines of an exhibition in Tehran on Monday, the official news agency IRNA reported

He said the Islamic Republic sees no reason for the presence of these cameras at its nuclear sites as they had been recording data supposed to exonerate Tehran from certain accusations, which are still in place.

Eslami added although in 2015, lengthy negotiations between Iran and the world powers resulted in the signing of a nuclear deal, formally known as the Joint Comprehensive Plan of Action (JCPOA), the West is still leveling accusations at Iran based on stolen documents and "baseless claims."

"Iran accepted to put curbs on its (nuclear) capacities to build trust, but despite all these, they did not remain committed to their obligations," he said.

Eslami said the agency itself has removed the cameras and sealed them, adding they will be kept in Iran's nuclear facilities until the other sides return to the JCPOA.

Eslami emphasized that the IAEA is currently monitoring Iran's nuclear activities according to the safeguards agreements.

In June, the IAEA's Board of Governors passed an anti-Iran resolution proposed by the United States, Britain, France and Germany following the agency's reports that Tehran had not provided "technically credible explanations" for uranium particles at three undeclared sites.

In the wake of the adoption of the IAEA resolution, Iran announced its decision to take a number of measures, including turning off the IAEA's surveillance cameras at its sites.

Iran signed the nuclear deal with world powers in July 2015, agreeing to curb its nuclear program in return for the removal of sanctions on the country. However, former US President Donald Trump pulled Washington out of the agreement in May 2018 and reimposed unilateral sanctions on Tehran, prompting the latter to drop some of its commitments under the pact.