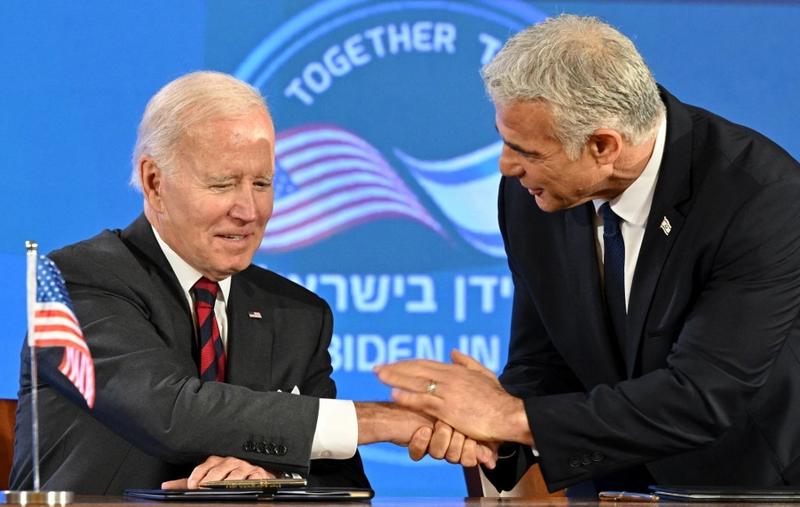 US President Joe Biden (left) and Israel's caretaker Prime Minister Yair Lapid, speak to each other after signing a security pledge in Jerusalem, on July 14, 2022. (MANDEL NGAN / AFP)

The undertaking, part of a "Jerusalem Declaration" crowning Biden's first visit to Israel as president, came a day after he told a local TV station that he was open to "last resort" use of force against Iran - an apparent move toward accommodating Israel's calls for a "credible military threat" by world powers.

Washington and Israel have separately made veiled statements about possible preemptive war with Iran - which denies seeking nuclear arms - for years. Thursday's statement reaffirmed US support for Israel's regional military edge and ability "to defend itself by itself"

"We will not allow Iran to acquire a nuclear weapon," Biden told a news conference following the signing of the declaration.

Washington and Israel have separately made veiled statements about possible preemptive war with Iran - which denies seeking nuclear arms - for years. Thursday's statement reaffirmed US support for Israel's regional military edge and ability "to defend itself by itself".

"The United States stresses that integral to this pledge is the commitment never to allow Iran to acquire a nuclear weapon, and that it is prepared to use all elements of its national power to ensure that outcome," the statement added.

Lapid cast this posture as a way of averting open conflict.

"The only way to stop a nuclear Iran is if Iran knows the free world will use force," he said after the signing ceremony.

Speaking alongside him, Biden described preventing a nuclear Iran as "a vital security interest for Israel and the United States and, I would add, for the rest of the world as well".

In 2015, Iran signed an international deal capping its nuclear projects with bomb-making potential. In 2018, then-US President Donald Trump quit the pact, deeming it insufficient, a withdrawal welcomed by Israel.

Iran has since ramped up some nuclear activities, putting a ticking clock on world powers' bid to return to a deal in Vienna talks. Israel now says it would support a new deal with tougher provisions. Iran has balked at submitting to further curbs.

Biden has pushed for a return to talks but said it was up to Iran to respond.

"We are not going to wait forever," he said.

Beyond enhancing the allies' sense of deterrence and mutual commitment, Thursday's power-projection may also offer Biden a boost when he continues on to Saudi Arabia on Friday. Riyadh has its own Iran worries, and Biden hopes to parlay that into a Saudi-Israeli rapprochement under US auspices.

Biden told reporters he and Lapid had discussed how important it was "for Israel to be totally integrated into the region". Lapid, in turn, deemed Biden's Saudi trip "extremely important to Israel".

Hamas, an Islamist group that has helped spearhead the Palestinian struggle against Israel, decried the moves.

Hamas leader Ismail Haniyeh issued a statement calling for the formation of "a political alliance to protect the region from domination, normalization and the seizure of its wealth”.

The Jerusalem Declaration further committed the United States and Israel to cooperating on defense projects such a laser interceptors, as well as on civilian technologies.

The United States was open to future defense grants to Israel, the statement said, reaffirming Washington's interest in reviving talks on an Israeli-Palestinian two-state solution.