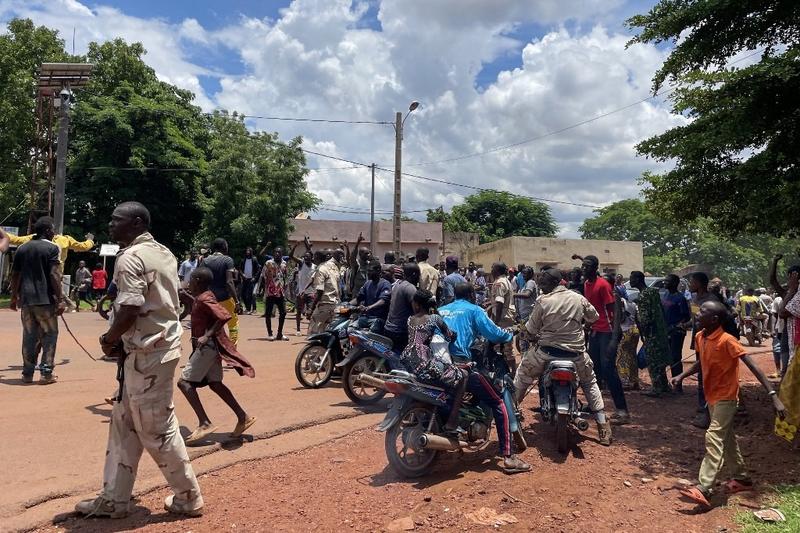 A crowd gathers around a man (not seen) suspected of taking part in thwarted "terrorist" attack after being beaten by a crowd, in front of the military base in Kati, Mali, on July 22, 2022. (AFP)

KATI, Mali - Suspected Islamist militants on Friday attacked the main military base where Mali's interim president lives outside the capital Bamako, but the armed forces said they had repelled the assault and had the situation under control.

Militants linked to al Qaeda and Islamic State have repeatedly attacked army bases across Mali during a decade-long insurgency concentrated in the north and center but never so close to Bamako in the south.

The Malian Armed Forces vigorously repelled a terrorist attack against the Kati base. It was early this morning at around 5 o'clock with two car bombs.

Heavy gunfire rang out for about an hour early on Friday at the Kati camp, about 15 km from Bamako. A convoy carrying the leader of Mali's junta, Colonel Assimi Goita, later sped away from his house in Kati in the direction of Bamako, a Reuters reporter said.

"The Malian Armed Forces vigorously repelled a terrorist attack against the Kati base. It was early this morning at around 5 o'clock with two car bombs," the military said in a tweet.

The military and government typically refer to Islamist insurgents in the country as terrorists.

"The provisional death toll is two assailants neutralised. The situation is under control and clearing operations are under way to flush out the authors and their accomplices."

Kati was the site of mutinies in 2012 and 2020 that led to successful coups, but three camp residents, who asked not to be identified, said the soldiers did not appear to be fighting among themselves.

The army said late on Thursday that al Qaeda-linked militants had staged coordinated attacks against several military camps earlier in the day in central Mali, killing one soldier and wounding 15.