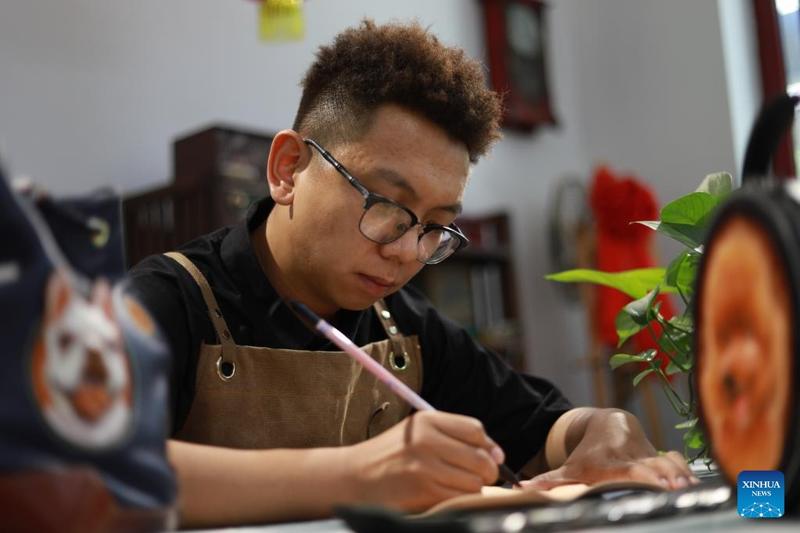 SHIJIAZHUANG－For craftsman Wu Haidong, each of his leather carving works is not only a piece of art, but also a unique carrier of memories.

Wu, 34, has focused on creating tailor-made leather objects carved with images of deceased pets. He is an inheritor of the intangible cultural heritage of Lianchi district, Baoding city, North China's Hebei province.

With a piece of leather, a carving knife and a paintbrush, Wu is like a magician, bringing to life the remembered animals with exquisite carving skills. Upon the request of pet owners, Wu makes the handicrafts into products such as bags, tags and keychains.

"By touching the carvings, people feel as if they are caressing their pets. It is kind of a consolation for them," he says.

"Leather carving is not a very popular art; many people are not familiar with it," Wu says, so he uses social media apps, such as Douyin and Kuaishou, to introduce his work and attract customers.

Traditionally, patterns of totems and natural scenery are the favored subjects of leather carving, representing riches and auspiciousness.

It was a coincidence that Wu got the idea of carving the images of pets as a theme.

"Once, one of my subscribers asked me to make a purse carved with the feature of his dead pet dog," he says.

The video of him making the purse attracted over 300,000 online likes. Since then, he started to focus on carving deceased pets for their grieving owners.

"The combination of traditional craftsmanship and these special subjects is not only beautiful, but also healing, giving the pet owners much comfort and warmth," he says. 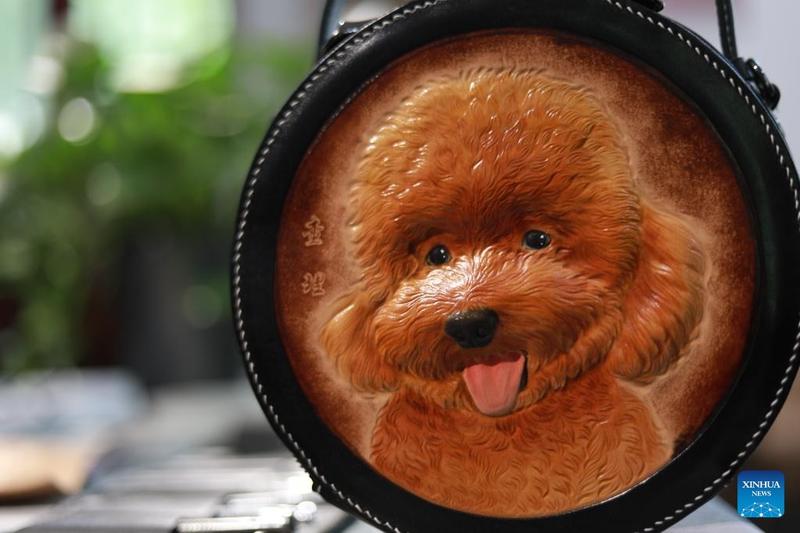 One of his customers, surnamed Deng, says that the leather tag Wu made for her makes her feel as if her beloved golden retriever is still alive.

The pet dog, nicknamed Jinjin, had been a member of Deng's family for more than 13 years before it was diagnosed with an incurable disease. The death of Jinjin was heartbreaking for Deng. When she saw videos of leather carving shared by Wu online, she contacted him immediately.

Wu, also a pet owner himself, suggested Deng give him some hair and ashes of the dog, which he mixed into the leather tag. "She burst into tears when touching the tag for the first time, saying that she felt as if the pet was still by her side," Wu says.

Currently, Wu has some 1.85 million followers on Douyin, the Chinese iteration of TikTok. He has finished some 1,000 pet-themed carvings since 2018.

Wu learned to draw at an early age. During his college years, as a student majoring in graphic design, he came across some leather carving works online and became infatuated with the art.

Making up his mind to dive into the craft, he spent two years learning from a master in Baoding.

Wu says there are two main steps for making leather carved products－the carving itself and the coloring. Craftsmen usually choose natural leather, with a fine grain and tough texture, to carve the patterns, which will be colored with special dyes that can permeate the leather.

"It takes a long time to color the leather, since we have to do it layer by layer so that the images will look three-dimensional and vivid," he says.

"My love and passion have been encouraging me to carry on with this job, and it has been rewarding for me."

Looking into the future, Wu says that he is keen to heal the hearts of more people with his art.