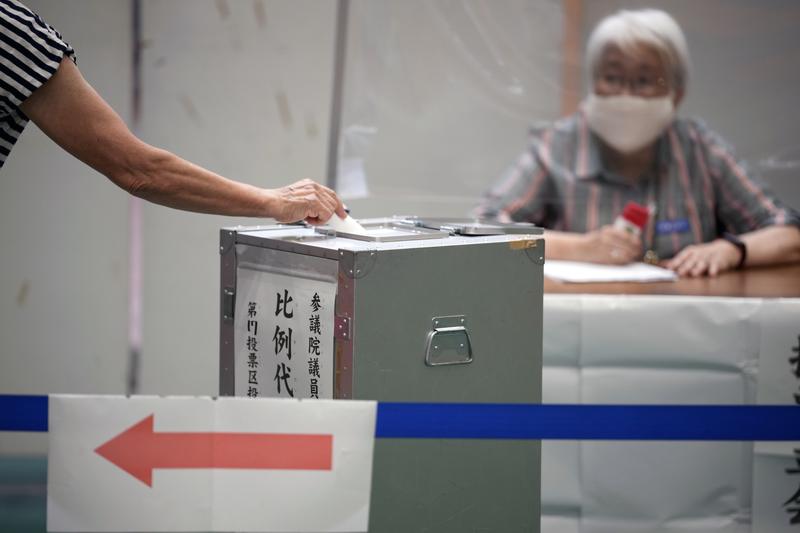 A voter casts a ballot in the upper house elections as representatives of a local election administration commission observe at a polling station, July 10, 2022, in Tokyo. (EUGENE HOSHIKO / AP)

TOKYO/NARA, Japan - Japan's conservative coalition government was projected to increase its majority in the upper house of parliament in an election on Sunday, two days after the assassination of dominant politician and power broker Shinzo Abe.

Abe, Japan's longest-serving modern leader, was gunned down on Friday during a campaign speech in the western city of Nara in a killing that stunned a country where political violence and gun crime are rare.

Shinzo Abe, Japan's longest-serving modern leader, was gunned down on Friday during a campaign speech in the western city of Nara in a killing that stunned a country where political violence and gun crime are rare

Prime Minister Fumio Kishida's Liberal Democratic Party (LDP), of which Abe remained an influential lawmaker, and its junior partner Komeito were on track to win 69 to 83 of the 125 seats contested in the chamber, from 69 previously, according to an exit poll by public broadcaster NHK.

Elections for parliament's less powerful upper house are typically a referendum on the sitting government. Change of government was not at stake, as that is determined by the lower house.

But the strong showing could help Kishida consolidate his rule as he looks to steer Japan's recovery from the COVID-19 pandemic, keep a lid on rising consumer prices, and bolster defense.

Final results are due on Monday.

"It's significant we were able to pull this election together at a time violence was shaking the foundations of the election," Kishida, an Abe protege, said after the exit poll.

"Right now, as we face issues including the coronavirus, Ukraine, and inflation, solidarity within the government and coalition parties is vital," he added.

The party held a moment of silence for Abe at its Tokyo headquarters as members waited for results to come in. 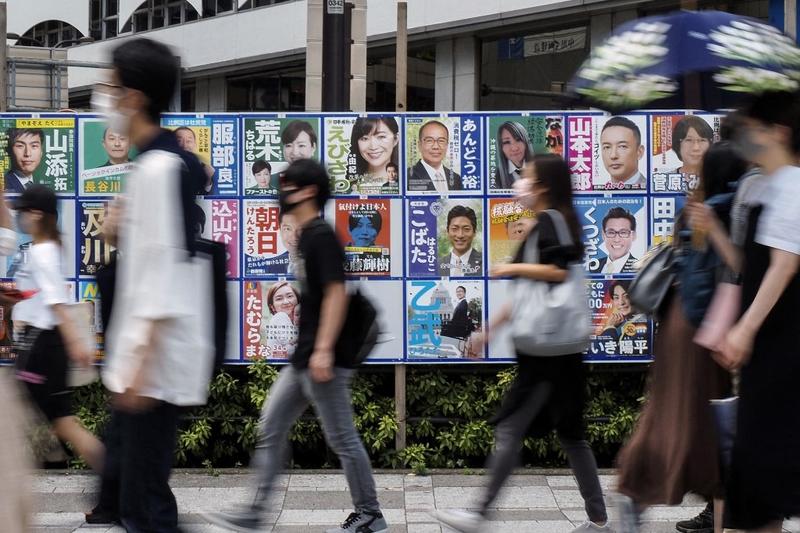 The LDP was projected to win as many as 69 seats, according to the exit poll, which would give it a majority even without Komeito.

Parties open to revising the constitution were projected to maintain their two-thirds majority in the upper house.

Kishida may move cautiously on constitutional change, but the apparent victory looked set to pave the way for more defense spending, a key LDP election promise, said Robert Ward of the International Institute of Strategic Studies.

Kishida "now has a green light for this", Ward said.

Asked about constitutional revision on Sunday evening, Kishida said he would focus on putting together a bill to be discussed in parliament.

People close to Kishida have said his team also wants to gradually phase out "Abenomics", Japan's signature economic policy of government spending and monetary stimulus named after the ex-premier who started the experiment nearly a decade ago.

Kishida may now have the political capital to change course, analysts said, and is also likely to have three years to drive through legislation before another election needs to be held.

"Kishida may have more leeway in pursuing policies based on his ideas, though lawmakers who were close to Abe could rally and more vocally call for sustaining Abenomics," said Koya Miyamae, senior economist at SMBC Nikko Securities.

Other analysts said the exit poll was broadly in line with pre-election surveys. Voter turnout was expected to rise to 51.58 percent from 48.8 percent at the last upper house election three years ago, Kyodo news agency estimated.

Abe was stumping for LDP candidate Kei Sato in Nara when he was shot from close-range by a man with a homemade gun.

The ex-premier "was shot in an act of terrorism in the midst of our election campaign," Sato said after the exit poll projected he would win his seat. "We continued our campaign in the belief that we must not cave into terrorism or fear it - we must overcome it."

Nara police said on Sunday they had seized a motorcycle and a vehicle belonging to the murder suspect, 41-year-old Tetsuya Yamagami, who was arrested at the scene.

Police said that they retrieved trays wrapped in aluminium foil from the vehicle, which they said the suspect told them he had used for drying gunpowder, and wooden boards with holes that he said he had used for test-firing his crude weapon made of wood and metal.

The suspect told police he spent months planning the attack, accusing the former prime minister of links to a religious group he blames for his mother's financial ruin, according to Japanese media.

Police said the suspect told them he arrived at a station near the scene more than an hour before the attack and passed time by visiting shopping complexes.