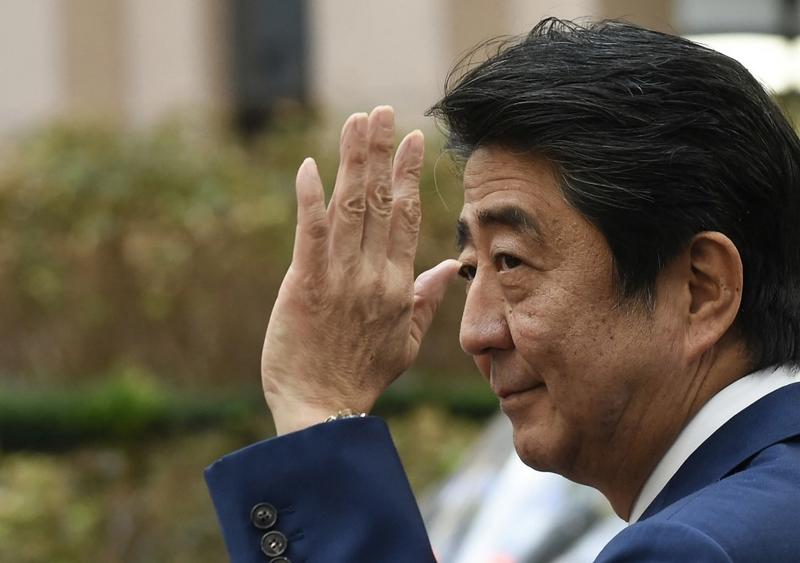 In this file photo taken on Octr 19, 2018, then Japan's Prime Minister Shinzo Abe waves as he leaves after attending an EU - Korea Summit meeting at the European Council in Brussels. (JOHN THYS / AFP)

TOKYO, - Shinzo Abe, Japan's longest-serving prime minister, who sought to lift the economy out of chronic deflation with his bold "Abenomics" policies and beef up the military, has died at 67.

Shinzo Abe became Japan's longest-serving premier in November 2019, but by summer 2020, support had been eroded by his handling of the COVID-19 outbreak as well as a series of scandals including the arrest of his former justice minister

Abe, who left office in 2020, was shot and killed on Friday during an election campaign speech in an attack his protege and incumbent Prime Minister Fumio Kishida called "absolutely unforgivable".

ALSO READ: Japan ex-PM Abe dies after being shot while making a speech

The lawmaker first became premier in 2006, lasting just a year before returning for a rare second stint in 2012 pledging to revive a stagnant economy, loosen the limits of a post-World War Two pacifist constitution and restore traditional values.

He was instrumental in winning the 2020 Olympics for Tokyo, cherishing a wish to preside over the Games and even appeared as Nintendo video game character Mario during the Olympic handover at Rio, the 2016 host.

Abe became Japan's longest-serving premier in November 2019, but by summer 2020, support had been eroded by his handling of the COVID-19 outbreak as well as a series of scandals including the arrest of his former justice minister. 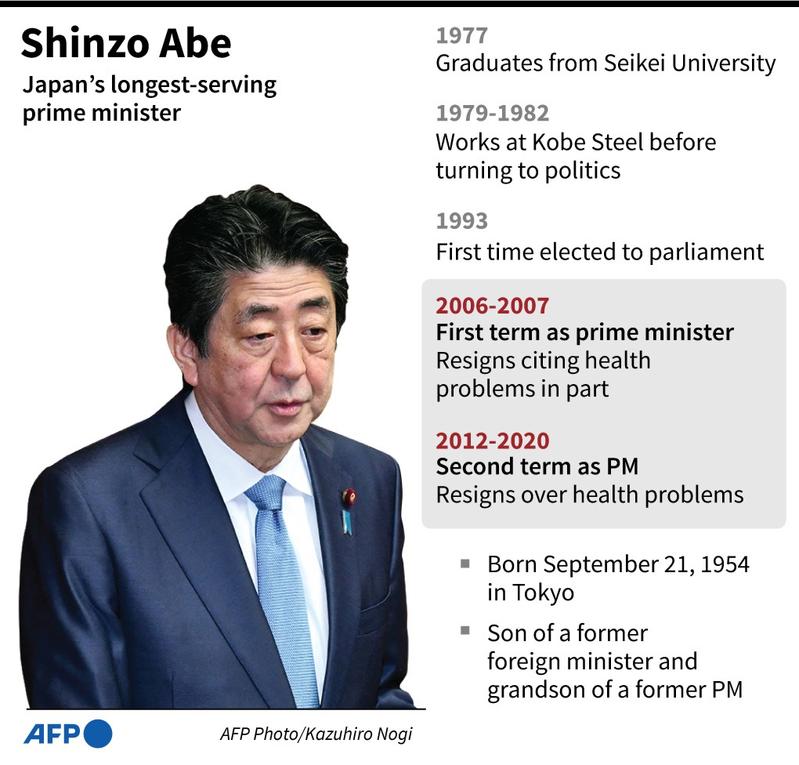 He resigned in September of that year without achieving his long-held goal of revising the constitution or presiding over the Games, which had been postponed to 2021 due to the pandemic.

But he remained a dominant presence over the ruling Liberal Democratic Party (LDP), controling one of its major factions. He was campaigning for an Upper House election two days later when he was assassinated. 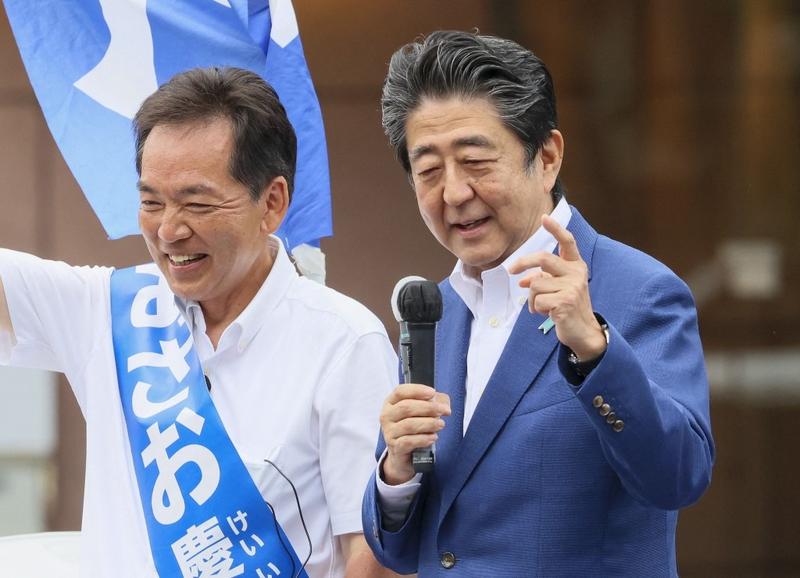 Abe launched a three-pronged "Abenomics" strategy to beat persistent deflation and revive economic growth with hyper-easy monetary policy and fiscal spending, along with structural reform to cope with a fast-aging, shrinking population

"What worries me most now is that because of my resigning, the conservative ideals that the Abe administration raised will fade," Abe subsequently wrote in the magazine Bungei Shunju.

"From now on, I want to sacrifice myself as one lawmaker to make true conservatism take root in Japan."

Five years after resigning, which he blamed on the intestinal ailment ulcerative colitis, Abe led his conservative LDP - ousted in 2009 - back to power.

He then launched a three-pronged "Abenomics" strategy to beat persistent deflation and revive economic growth with hyper-easy monetary policy and fiscal spending, along with structural reform to cope with a fast-aging, shrinking population. 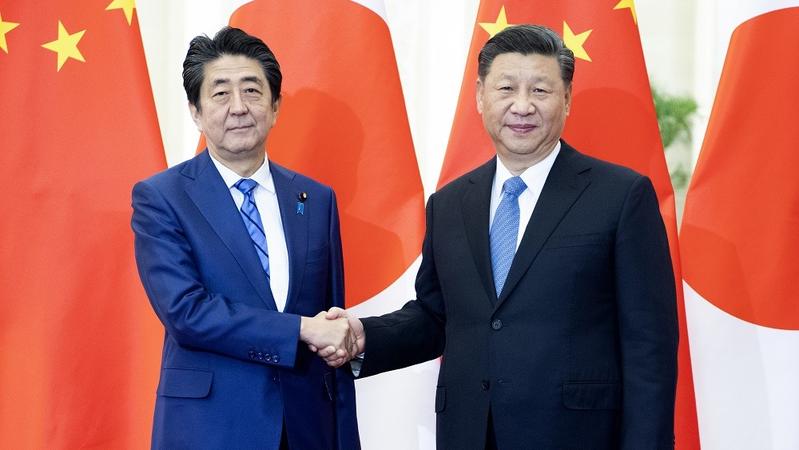 Deflation proved stubborn, however, and his growth strategy suffered in 2019 from a sales tax hike and Sino-US trade war. The COVID-19 pandemic the following year triggered Japan's deepest-ever economic slump.

At the pandemic's onset, Abe took time to close Japan's borders and implement a state of emergency urging people to stay home and shops to close. Critics initially branded the response clumsy and later faulted Abe for a lack of leadership.

When he resigned citing the same intestinal ailment, Japan's COVID-19 death rate was far below that of many other developed nations. 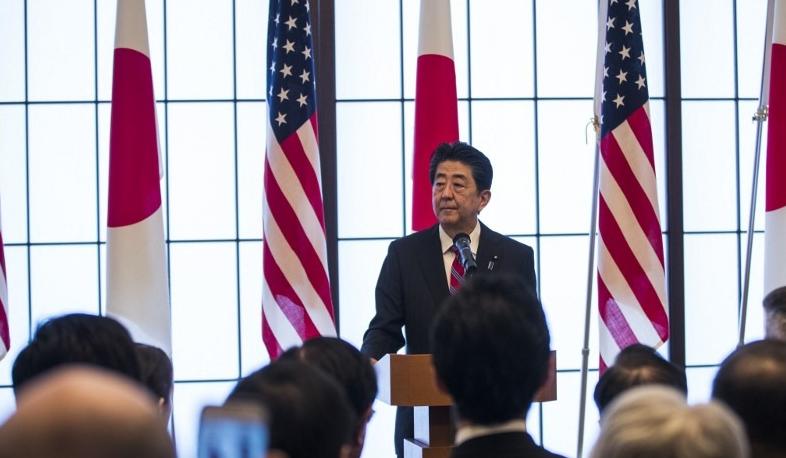 Japan's then Prime Minister Shinzo Abe (center) delivers his speech during the 60th anniversary commemorative reception of the signing of the Japan-US security treaty at Iikura Guesthouse in Tokyo on Jan 19, 2020. (BEHTROUZ MEHRI / POOL / AFP)

Abe hailed from a wealthy political family that included a foreign minister father and a great-uncle who served as premier. But when it came to many policies, his grandfather, the late Prime Minister Nobusuke Kishi, seems to have mattered most.

Kishi was a wartime cabinet minister imprisoned but never tried as a war criminal after World War Two. He served as prime minister from 1957 to 1960, resigning due to public furore over a renegotiated US-Japan security pact.

Five years old at the time, Abe famously heard the sound of clashes between police and leftist crowds protesting the pact outside parliament as he played on his grandfather's lap. 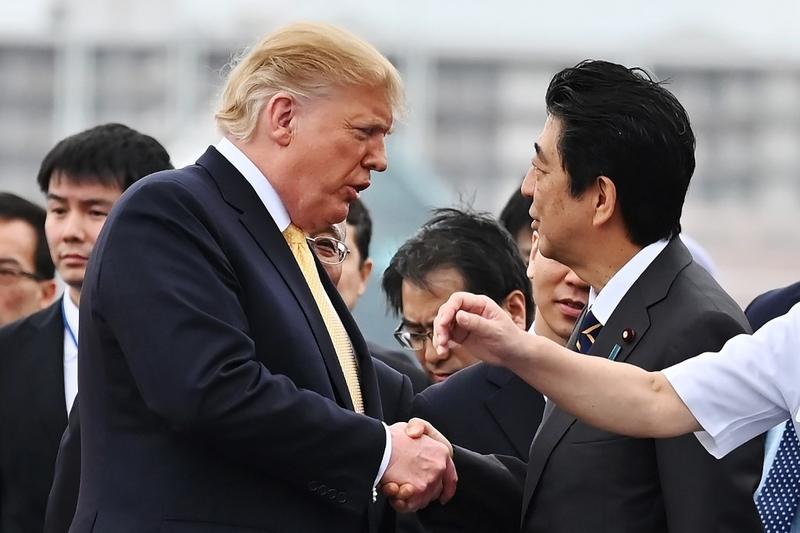 Kishi tried unsuccessfully to revise Japan's US-drafted 1947 constitution to become an equal security partner with the United States and adopt a more assertive diplomacy - issues central to Abe's own agenda.

Revising the pacifist constitution remained a top priority for Abe, a contentious goal since many Japanese see the charter as responsible for the country's post-war record of peace

Abe boosted defense spending and pushed through laws to let Japan exercise the right of "collective self-defense", or militarily aiding an ally under attack.

Revising the pacifist constitution remained a top priority for Abe, a contentious goal since many Japanese see the charter as responsible for the country's post-war record of peace.

Abe's underlying agenda was to escape what he called the post-war regime, a legacy of US occupation that conservatives argue deprived Japan of national pride. Reforming the education system to restore traditional mores was another of his goals.

He also adopted a less apologetic stance towards Japan's World War Two actions, saying future generations should not have to keep apologizing for the mistakes of the past. 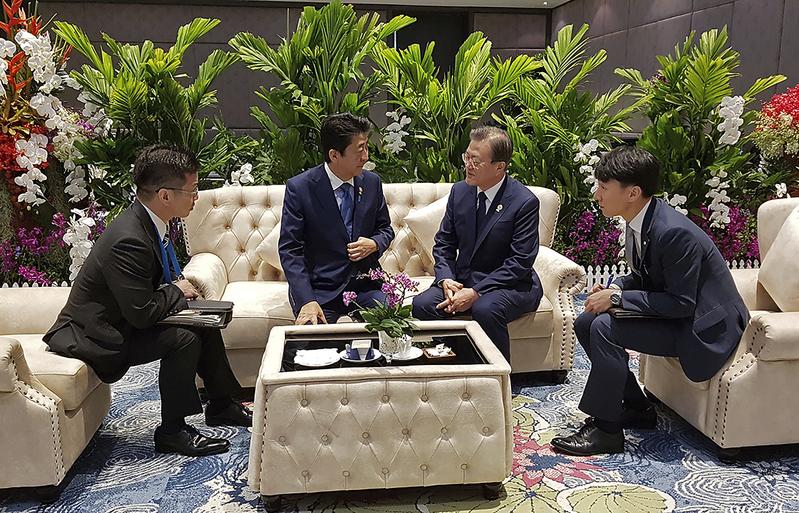 Though Abe also sought to improve ties with China and South Korea, where bitter wartime memories run deep, he riled both neighbours in 2013 by visiting Tokyo's Yasukuni Shrine, seen by Beijing and Seoul as a symbol of Japan's past militarism.

In later years, he refrained from visiting in person and instead sent ritual offerings.

Across the Pacific, Abe forged close ties with then US President Donald Trump, playing golf and engaging in frequent phone calls and meetings.

He was re-elected as LDP president for a third consecutive three-year-term in 2018 after a party rule change and, until the COVID-19 pandemic struck, some in the LDP had considered another rule change to allow him a fourth term.