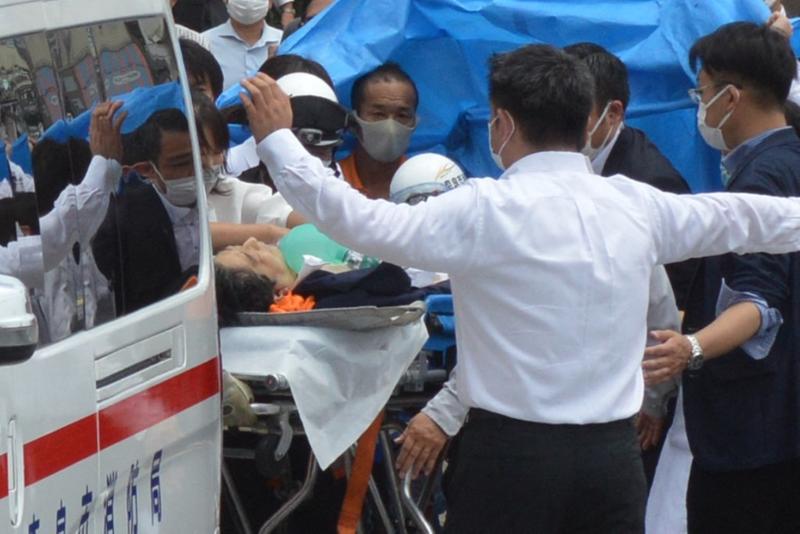 Former Japanese prime minister Shinzo Abe (center) is transported into an ambulance near Yamato Saidaiji Station after being shot in the city of Nara on July 8, 2022. (STR / YOMIURI SHIMBUN / AFP)

NARA, Japan / BEIJING - Former Prime Minister Shinzo Abe, Japan's longest-serving leader, died on Friday after being shot while campaigning for a parliamentary election, an official from his political party said.

A man opened fire on Abe, 67, from behind with an apparently homemade gun as he spoke at a drab traffic island in the western city of Nara, Japanese media showed earlier. 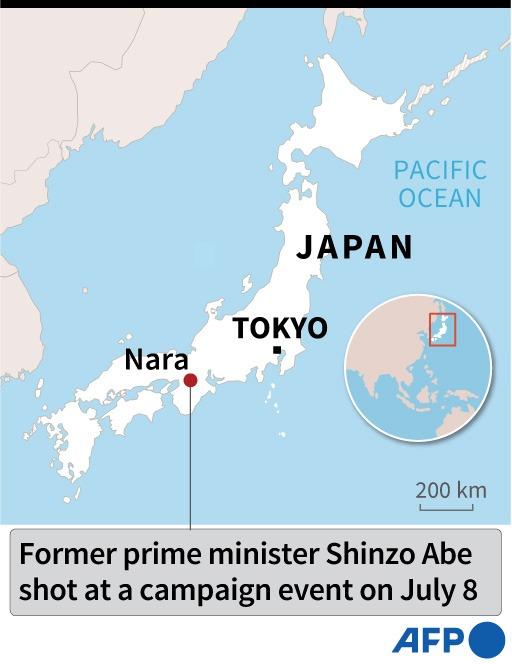 This AFP graphic dated July 8, 2022 shows the map of Japan locating Nara where former prime minister Shinzo Abe was shot at a campaign event on Friday, leaving him in the condition of "cardiorespiratory arrest", according to local media.

This attack is an act of brutality that happened during the elections - the very foundation of our democracy - and is absolutely unforgivable.

It was the first assassination of a sitting or former Japanese premier since the days of prewar militarism in the 1930s.

Speaking before Abe's death was announced, Prime Minister Fumio Kishida condemned the shooting in the "strongest terms" while Japanese people and world leaders expressed shock at the violence in a country in which political violence is rare and guns are tightly controled.

"This attack is an act of brutality that happened during the elections - the very foundation of our democracy - and is absolutely unforgivable," said Kishida, struggling to keep his emotions in check.

A fire department official had said Abe appeared to be in a state of cardiac arrest when airlifted to hospital.

Police said a 41-year-old man suspected of carrying out the shooting had been arrested. NHK quoted the suspect, identified as Tetsuya Yamagami, as telling police he was dissatisfied with Abe and wanted to kill him.

Abe was making a campaign speech outside a train station when two shots rang out at about 11:30 am (0230 GMT). Security officials were then seen tackling a man in a grey T-shirt and beige trousers.

A man (bottom) suspected of shooting former Japanese prime minister Shinzo Abe is tackled to the ground by police at Yamato Saidaiji Station in the city of Nara on July 8, 2022. (STR / YOMIURI SHIMBUN / AFP)

Police said a 41-year-old man suspected of carrying out the shooting had been arrested. NHK quoted the suspect, identified as Tetsuya Yamagami, as telling police he was dissatisfied with former prime minister Shinzo Abe and wanted to kill him

"There was a loud bang and then smoke," businessman Makoto Ichikawa, who was at the scene, told Reuters, adding that the gun was the size of a television camera.

"The first shot, no one knew what was going on, but after the second shot, what looked like special police tackled him."

Earlier, Kyodo news service published a photograph of Abe lying face-up on the street by a guardrail, blood on his white shirt. People were crowded around him, one administering heart massage.

Nara emergency services said he had been wounded on the right side of his neck and left clavicle. His brother, Defense Minister Nobuo Kishi, had said Abe was getting blood transfusions.

NHK showed live footage of Abe's wife, Akie, on her way by train to the hospital where he was being treated. 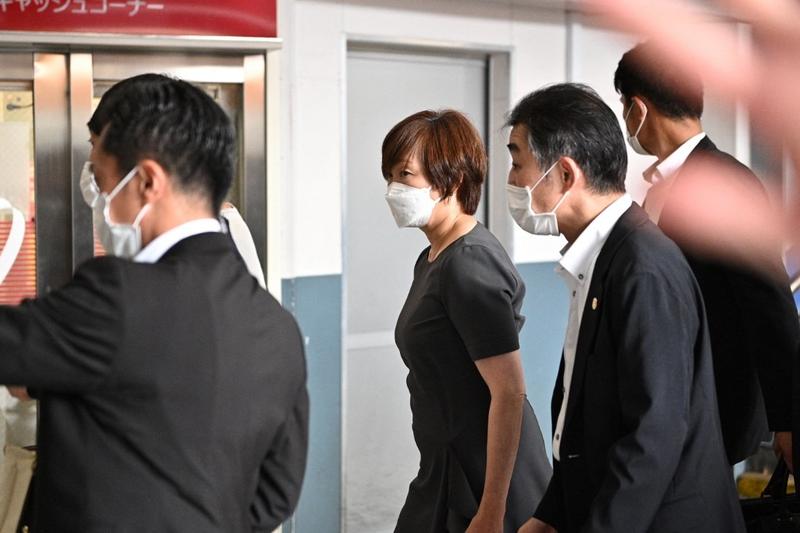 Akie Abe (center), wife of former Japanese prime minster Shinzo Abe, arrives by train in Nara before heading to the Nara Medical University Hospital in Kashihara, Nara Prefecture, where her husband was transferred after being shot during an election campaign in Nara on July 8, 2022. (PHILIP FONG / AFP)

Airo Hino, political science professor at Waseda University, said such a shooting was unprecedented in Japan. "There has never been anything like this," he said.

Senior Japanese politicians are accompanied by armed security agents but often get close to the public, especially during political campaigns when they make roadside speeches and shake hands with passersby. 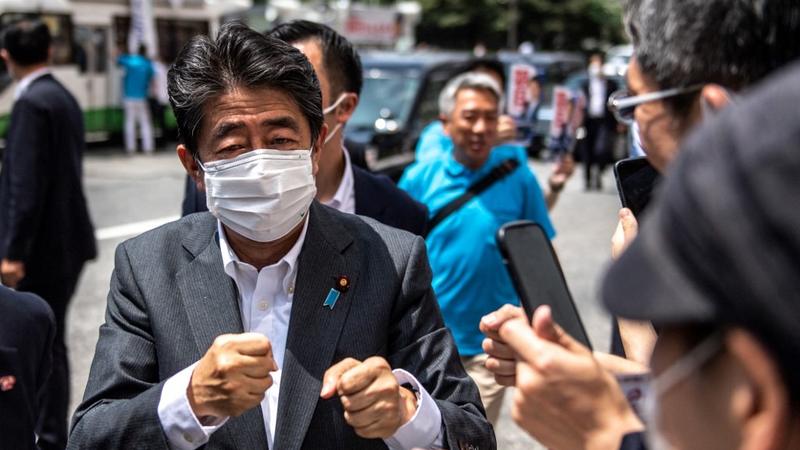 Former Japanese prime minister Shinzo Abe interacts with supporters as he joins the election campaign for Liberal Democratic Party member Kentaro Asahi (not pictured) ahead of the House of Councillors election on July 10, in Tokyo on June 22, 2022. (PHILIP FONG / AFP)

Police said the suspected shooter was a resident of Nara. Media said he had served in Japan's military for three years until 2005. Defense Minister Kishi declined to comment on that

In 2007, the mayor of Nagasaki was shot and killed by a yakuza gangster. The head of the Japan Socialist Party was assassinated during a speech in 1960 by a right-wing youth with a samurai short sword. A few other prominent postwar politicians were attacked but not injured.

Police said the suspected shooter was a resident of Nara. Media said he had served in Japan's military for three years until 2005. Defense Minister Kishi declined to comment on that.

Abe served two terms as prime minister, stepping down in 2020 citing ill health. But he has remained a dominant presence over the ruling Liberal Democratic Party (LDP), controlling one of its major factions.

Kishida, Abe's protege, had been hoping to use the election to emerge from Abe's shadow and define his premiership, analysts have said. Kishida suspended his election campaign after the shooting. All main political parties condemned the attack.

A Chinese Foreign Ministry spokesperson said on Friday that China extends its condolences and sympathies to Abe's family.

"China is shocked by the sudden incident. Abe once contributed to the improvement and development of China-Japan relations. We extend our condolences and sympathies to Abe's family," said spokesperson Zhao Lijian.

Speaking before Abe's death was announced, US Secretary of State Antony Blinken expressed deep concern over his condition.

"Our thoughts, our prayers are with him, with his family, with the people of Japan," Blinken said on the sidelines of a G20 meeting on the Indonesian island of Bali. 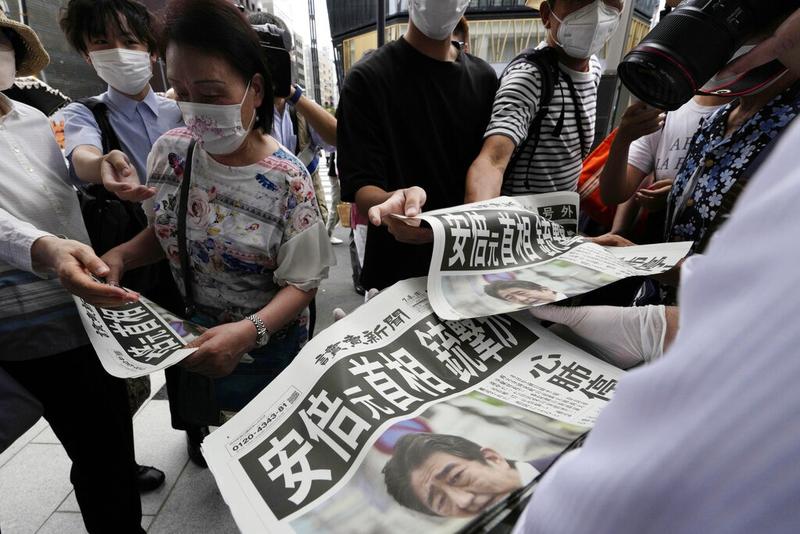 The yen rose and Japan's Nikkei index fell on news of the shooting, partially driven by a knee-jerk flight to safety.

Abe is best known for his “Abenomics” policy of aggressive monetary easing and fiscal spending.

He also bolstered defense spending after years of declines and expanded the military’s ability to project power abroad.

In a historic shift in 2014, his government reinterpreted the postwar, pacifist constitution to allow troops to fight overseas for the first time since World War Two.

The following year, legislation ended a ban on exercising the right of collective self-defense, or defending a friendly country under attack.

Abe, however, did not achieve his goal of revising the US-drafted constitution by writing the Self-Defense Forces, as Japan’s military in known, into the pacifist Article 9.

He became prime minister again in 2012.

Abe hailed from a wealthy political family that included a foreign minister father and a grandfather who served as premier.