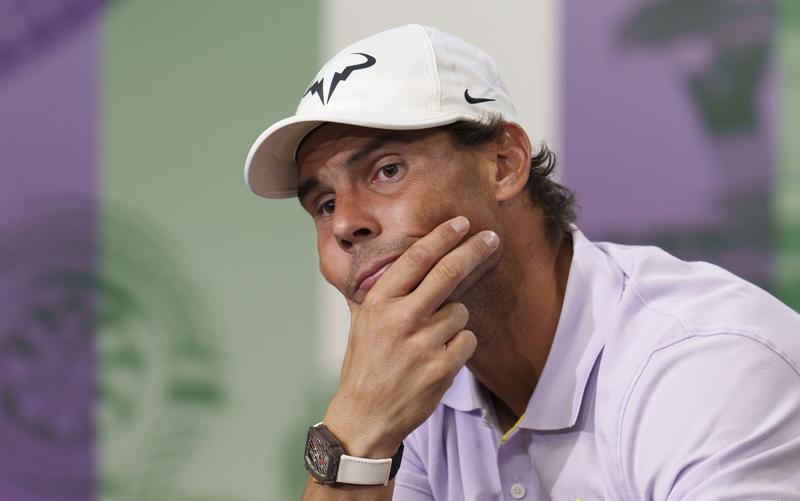 Spain's Rafael Nadal announces that he is withdrawing from the semifinal of the Gentlemen's Singles during a press conference at The All England Lawn Tennis Club, Wimbledon, July 7, 2022. (JOE TOTH / POOL PHOTO VIA AP)

LONDON - Rafa Nadal's hopes of completing a rare calendar year Grand Slam ended on Thursday when the Spaniard pulled out of his highly-anticipated Wimbledon semifinal showdown against Australian Nick Kyrgios with an abdominal strain.

Nadal won the Australian and French Opens back-to-back this year for the first time in his career and was bidding to become the first man since Rod Laver in 1969 to complete the calendar-year slam.

Unfortunately, I have to pull out from the tournament. As everybody saw yesterday (in the quarterfinal), I have been suffering with abdominal pain. I knew something was not okay there.

"Unfortunately, I have to pull out from the tournament," the dejected Spaniard told reporters at a hastily arranged news conference, less than 24 hours before his semifinal.

"As everybody saw yesterday (in the quarterfinal), I have been suffering with abdominal pain. I knew something was not okay there. Yeah, that's confirmed. I have a tear in the muscle in the abdomen.

"I was thinking during the whole day about the decision to make."

With the Spaniard's withdrawal, unseeded 27-year-old Kyrgios became the first Australian to reach the men's singles final at the All England Club since Mark Philippoussis in 2003.

The Australian has shown his good, bad and ugly sides during the tournament and been fined a total of $14,000 for two offences — spitting towards a fan after his first-round win and swearing in a fiery third-round clash with Stefanos Tsitsipas.

Kyrgios will take on either top seed Novak Djokovic, who is bidding for a fourth straight and seventh overall title on the manicured lawns of Wimbledon, or local hope Cameron Norrie in Sunday's final. Their semifinal is scheduled for Friday.

Nadal's father and sister urged him to retire mid-match against American Taylor Fritz during Wednesday's match on Centre Court but Nadal ignored the pleas from his box and pulled off a remarkable win in four hours and 20 minutes.

He was back on Thursday at the All England Club, hitting forehands and backhands on the practice courts at Aorangi Park hoping to be able to turn up against Kyrgios.

The winner of a men's record 22 Grand Slam titles said it did not make sense to continue as it was evident he could not have been competitive.

"Even if I tried a lot of times during my career to keep going under very tough circumstances, in that one I think it's obvious that if I keep going the injury is going to be worse and worse," he said. "I feel very sad to say that. 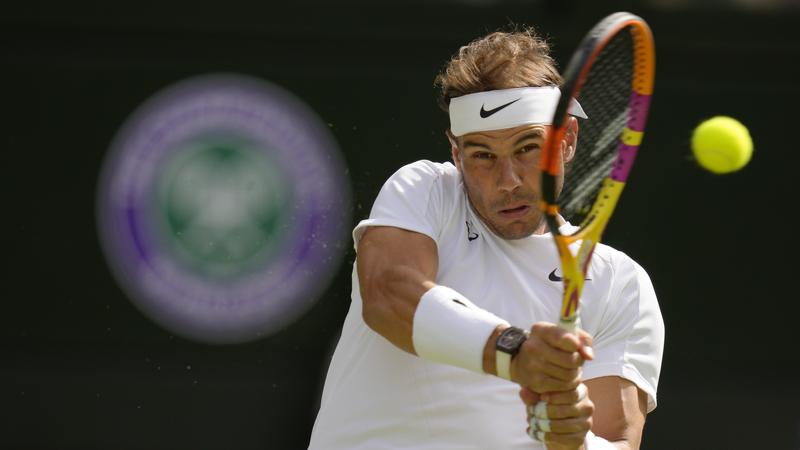 After Nadal missed a chunk of last season with a foot injury, including the 2021 Wimbledon and US Open, he arrived for the Australian Open at the start of the year after suffering a bout of COVID-19 and with lingering doubts over his fitness.

But despite a poor build up the 36-year-old went on to lift the trophy at Melbourne Park.

He then suffered a stress fracture in his ribs at Indian Wells but played at Roland Garros and won the title with pain-killing injections before each match.

Nadal only confirmed his Wimbledon participation after radio frequency treatment eased the pain in his foot.

"As I always said, for me the most important thing is happiness more than any title, even if everybody knows how much effort I put in to be here," Nadal told reporters at the packed news conference.

"But I can't risk that match and stay two, three months outside of competition because that's going to be a tough thing for me."

Nadal appeared in a more cheerful mood when he left the Wimbledon premises, stopping to pose for pictures and thanking the staff in the player reception area and at the exit doors.

It was another year when he left the grounds empty-handed, having won the last of his two Challenge Cups way back in 2010.

"I did all the things the best way possible to give myself a chance here," said Nadal, adding that he hoped to have a normal hardcourt season, including at the US Open, after recovering.

"I am in the semifinals, so I was playing very well the last couple of days. Especially yesterday, at the beginning of the match, playing at a very, very high level.

"Even that makes me feel a little bit worse because I felt that playing at the level that I was playing, probably I will have a chance."