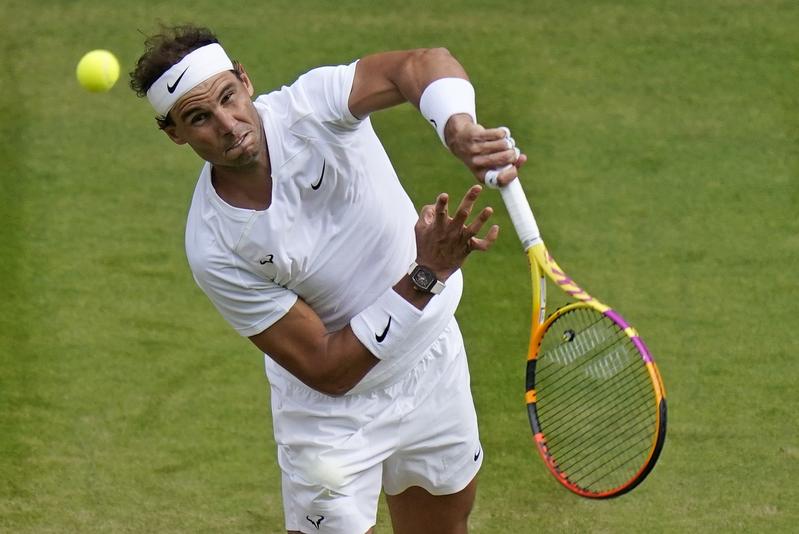 Spain's Rafael Nadal serves to Taylor Fritz of the US in a men's singles quarterfinal match on day ten of the Wimbledon tennis championships in London, July 6, 2022. (GERALD HERBERT / AP)

Struggling with an abdominal injury, Nadal appeared close to retiring mid-match but found the will to beat Fritz 3-6 7-5 3-6 7-5 7-6 (10-4) in four hours and 20 minutes to set up a semifinal showdown against Australian maverick Nick Kyrgios.

During the second set Nadal's father and sister fervently urged him from the player's box at Centre Court to put an end to his misery, but the two-time former Wimbledon champion paid no heed to the requests.

The All England Club, where the Spaniard has won two of his 22 majors, has been the least rewarding place for Nadal but he arrived this year having won the Australian and French Open titles back-to-back for the first time in his career

"They told me I need to retire from the match," said Nadal, adding that he himself considered giving up quite a few times. "Well, I tried. For me it was tough to retire in the middle of the match.

"I did it a couple of times in my tennis career. It's something that I hate to do. So I just keep trying."

The All England Club, where the Spaniard has won two of his 22 majors, has been the least rewarding place for Nadal but he arrived this year having won the Australian and French Open titles back-to-back for the first time in his career.

Fritz, 12 years younger than the 36-year-old Nadal, dealt a blow to the Spaniard earlier this year in the final of the ATP 1000 event in Indian Wells, putting an end to his 20-match winning run in the season.

But Nadal played that match with a stress fracture in his rib — which later ruled him out of competition for a month.

Taylor Fritz of the US reacts as he wins a point against Spain's Rafael Nadal in a men's singles quarterfinal match on day ten of the Wimbledon tennis championships in London, July 6, 2022. (KIRSTY WIGGLESWORTH / AP)

Nadal arrived for the contest having won all seven quarterfinals he played at Wimbledon and imposed himself against Fritz from the start, wielding his forehand like a sword to break serve in the opening game.

Fritz appeared a bit listless against the left-hander's heavy groundstrokes but grew into the match and he converted his fourth breakpoint chance in the sixth game to get the set back on serve.

A couple of costly errors from Nadal gave Fritz another break and the American blitzed through the opening set, winning five straight games from 1-3, 0-30 down.

But the Spaniard started struggling physically — his head bowed down on court and his hands on his knees — and he gave up the advantage with two double faults in the fifth game.

Nadal soon took a medical time-out and returned to the packed showcourt amid huge applause. He then broke Fritz's delivery in the 12th game to level the match at one set apiece.

"I had to find a way to serve a little bit different," said Nadal, whose serve speed dropped drastically due to the injury.

Pensive during the changeovers and still struggling on court while serving, Nadal was broken two times as the American bagged the third set comfortably.

But he was not ready to throw in the towel yet. Nadal traded two breaks before claiming the American's serve a third time to force a deciding fifth set.

With the crowd firmly behind him, Nadal got the break in the seventh game, staring back at his player's box, but Fritz broke back immediately to force a 10-point deciding tiebreaker.

The Spaniard surged 5-0 ahead in the tiebreaker, then won a 25-shot rally amid raucous applause and converted his second matchpoint with a stinging forehand winner for a memorable victory.

"Unfortunately, or fortunately, I am able to manage, to improve, and to adapt to the circumstances that my body presents to me to keep being competitive," he said.

"I was able to improve my tennis depending on the needs. Something that I am happy with."