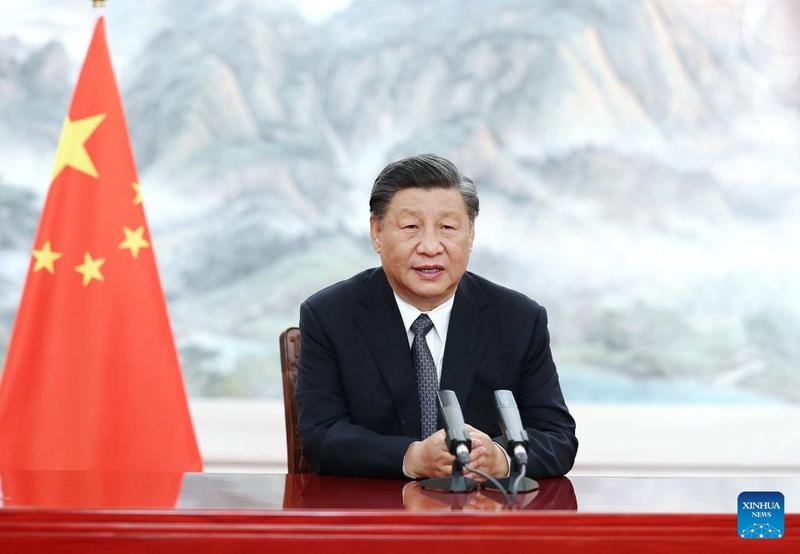 BEIJING – Chinese President Xi Jinping said on Wednesday that he hopes business leaders to champion open, innovative and shared development, so as to add new impetus to BRICS cooperation.

He made the remarks while delivering a keynote speech in virtual format at the opening ceremony of the BRICS Business Forum.

He expressed the hope that business leaders will actively participate in building the BRICS Partnership on New Industrial Revolution, strengthen cooperation on digital economy, smart manufacturing, clean energy and low-carbon technology, and support the industrial restructuring and upgrading in BRICS countries.

Cooperation should also be advanced in fields of energy, food, infrastructure and skill training to ensure that more benefits of development will reach everyone in a more equitable way, he added.

Xi said history has shown that hegemony, group politics and bloc confrontations bring neither peace nor stability, but rather war and conflict.

The Ukraine crisis has again sounded the alarm for humanity: Countries will surely end up in security hardships if they place blind faith in their positions of strength, expand military alliances, and seek their own safety at the expense of others, he said.

Noting that development holds the key to tackle challenges and promote people's well-being, he said the aspirations of the people and the interests of the international community should be the focus in steering global development into a new era to bring benefits to people of all countries.

President Xi called on countries around the world to stick together in the face of difficulties and join hands for win-win cooperation.

People are all worried if the world economy will fall into the quagmire of crises. At this crucial moment, only by sticking together in solidarity and cooperation can we overcome economic crises.

Currently, some key industrial and supply chains are intentionally hindered, commodities prices are fluctuating at high levels, inflation is running high around the world, international financial markets remain volatile, and the momentum of the global economic recovery is continuously weakening, he said.

"People are all worried if the world economy will fall into the quagmire of crises," Xi said. "At this crucial moment, only by sticking together in solidarity and cooperation can we overcome economic crises."

Describing sanctions as boomerangs and double-edged swords, he said those who politicize, leverage and weaponize global economy and willfully impose sanctions by taking advantage of dominance in international financial and monetary systems will eventually harm others and themselves and bring disasters to people around the world.

The Chinese president called on major developed countries to avoid negative spillover effects of their policies and to prevent severe shocks for developing countries.

Macroeconomic policy coordination should be intensified in order to prevent global recovery from slowing down or even halting, he said.

Xi said China will strengthen macro-policy adjustment and adopt more effective measures to strive to meet the social and economic development targets for 2022 and minimize the impacts of COVID-19.

China has adhered to the principle of "people first, life first," built a solid defense against the epidemic, and consolidated the results of epidemic prevention and control, he said. The measures have protected the people's life and health to the utmost and stabilized the fundamentals of economic and social development as much as possible, Xi added.

President Xi said economic globalization has been faced with headwinds over a period of time, as some countries have tried to "decouple and cut off chains," and build "exclusive yards with high walls."

This has raised common concern in the international community that, if the trend goes on, the global economy will be divided into isolated blocs, he said.

Those who attempt to turn back the wheel of history and block others' paths will only reach a dead end themselves, he said. 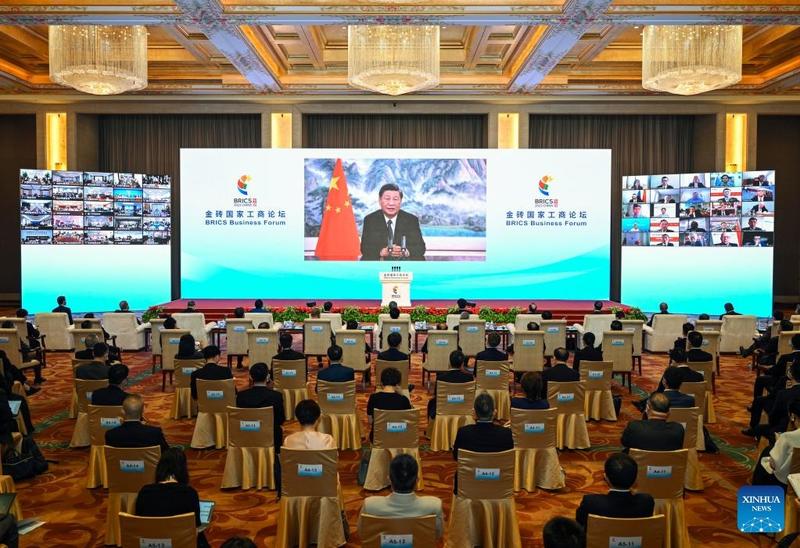 Xi called for efforts to stay open and inclusive, and clear away all barriers impeding the development of productive forces to promote the sound development of globalization.

"We should encourage the free flow of capital and technology and a continued emergence of innovation and wisdom so as to pool the synergy of global economic growth," he said.

Xi urged efforts to strengthen global economic governance and increase the representation and voices of emerging markets and developing countries.

He called for upholding the multilateral trading system with the World Trade Organization at its core, removing trade, investment and technology barriers, and working to build an open world economy.

Xi said the Communist Party of China (CPC) is to convene its 20th national congress in the second half of 2022 to draw China's development blueprint in the next stage.

China will continue to enhance opening-up and foster a business environment that is based on market principles, governed by law and up to international standards, said the Chinese leader.

READ MORE: BRICS speaks as one voice for shared growth

He encouraged businesses to invest and develop in China, enhance trade and economic cooperation, and share development opportunities.

Despite the changing international landscape, the historical trend of openness and development will not change, nor will the aspiration to meet challenges together, said Xi.

He called on all countries to not flinch away from risks, rise up to challenges and forge ahead toward the goal of building a community with a shared future for humanity.