By Zhong Nan, Liu Zhihua in Beijing, and Xie Chuanjiao in Qingdao

Member countries will utilize summit to champion cause of developing world 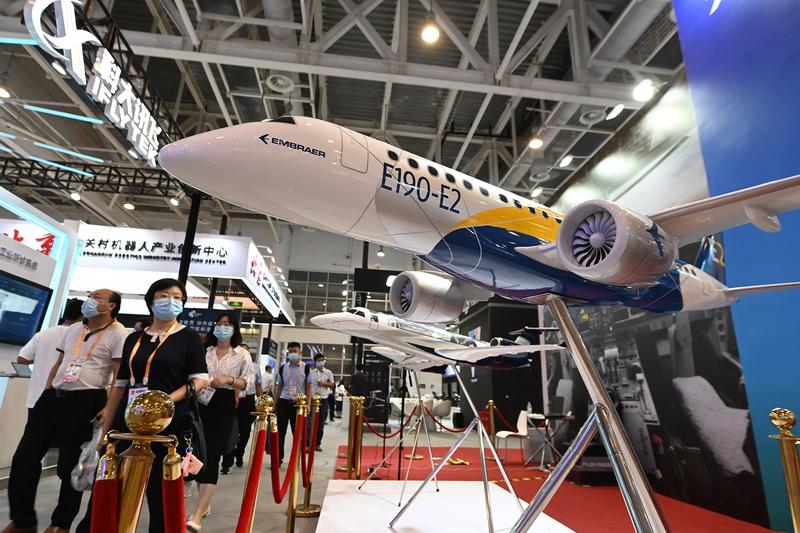 An aircraft model from Brazil on show during an expo in Xiamen, Fujian province. (LIN SHANCHUAN / XINHUA)

China's foreign trade with other BRICS countries will continue to grow strongly this year as economic and trade cooperation among them will deepen, experts and business leaders said on Tuesday.

And they will likely seek to achieve that during this week's 14th BRICS Summit and two other related high-level events－the High-level Dialogue on Global Development and the BRICS Business Forum－which will run from Wednesday through Friday.

The summit and events will gather online the leaders of the world's five prominent emerging markets as well as leaders from some other developing countries.

On the one hand, emerging markets and developing countries are coping with an increasingly volatile world. On the other, they are expected to expand trade in agricultural products, energy and resources, high-tech, equipment manufacturing and modern services in the coming years, said Zheng Wei, a researcher with Shanghai-based China Outsourcing Institute, a research body operating under the aegis of the Ministry of Commerce.

He said the vigorous development of digital economy also has provided a rare opportunity for the BRICS countries to accelerate growth.

China's foreign trade with other BRICS countries soared by 12.1 percent year-on-year to 1.31 trillion yuan ($195.71 billion) in the first five months of this year, about 3.8 percentage points higher than the overall growth rate of China's foreign trade during the same period, according to information released by the General Administration of Customs on Tuesday.

The BRICS countries should also seize the opportunities arising from the Belt and Road Initiative, to jointly promote economic globalization, said Zhang Shaogang, vice-chairman of the China Council for the Promotion of International Trade in Beijing.

Tracy Xie, president for China unit of Vale SA, the Brazilian mining giant, said: "As a long-term partner of China for almost half a century, we will continue to make our contribution in China's great journey to decarbonizing its iron and steel industry and achieving its dual carbon goals (peaking emissions by 2030 and achieving neutrality by 2060) through a portfolio of high-quality products and technological solutions. We look forward to transforming the future together with China."