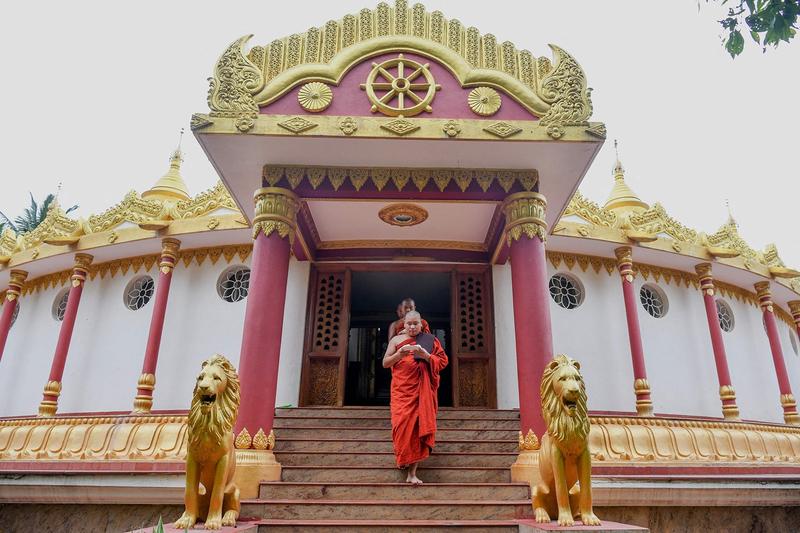 Deep in the vast plain of northeastern India, the chirping of birds and soft Buddhist chanting early in the mornings and evenings provide the perfect backdrop for meditation.

Buddhists around the world consider the temple city of Bodh Gaya in Bihar state, about 500 kilometers from Kolkata, one of the most important pilgrimage centers for the religion.

Zha Liyou, Chinese consul general to Kolkata, highlighting the importance of Bodh Gaya as a major tourist destination, said that it has the potential to trigger an influx of arrivals from China.

Speaking from Kolkata, Zha said that the Mahabodhi Temple Complex in Bodh Gaya was a major tourist destination for Chinese before the COVID-19 pandemic emerged. Many Chinese still want to visit the city, but the pandemic has stalled arrivals, Zha added.

According to the scriptures, Buddha attained enlightenment 2,540 years ago in Bodh Gaya after sitting under the Bodhi Tree near the Mahabodhi temple for a week, meditating on the causes of suffering. The temple is a UNESCO World Heritage site.

Zha said that in addition to Bodh Gaya, destinations such as Nalanda, Rajgir, Vaishali and Patna, the capital of Bihar, are favorites among Chinese tourists, adding that the state is also home to numerous stupas.

These destinations not only have the economic potential to revive local tourism and attract Buddhist scholars from across the globe, they also offer visitors a broader perspective, Zha said.

The diplomat, who has visited Bodh Gaya three times since he took office in Kolkata in 2019, hopes that the number of Chinese tourists visiting Bodh Gaya will pick up soon.

"I look forward to an influx of visitors from China, and my office is willing to facilitate cultural exchanges to strengthen tourist flows between the two countries," he said.

During his visits to Bodh Gaya, Zha organized cultural and religious events in collaboration with Chinese communities from Kolkata. He said China, which has the world's largest Buddhist population, is historically and culturally connected by the religion.

The pandemic has badly affected residents in Bodh Gaya who rely directly or indirectly on earnings from the tourism and hotel industries, as international flights at Gaya airport have been suspended since March 2020.

Tour operators said there was no increase in tourist arrivals this year ahead of Buddha Purnima, the biggest Buddhist festival celebrated in India and Nepal, which fell on May 16.

Rakesh Kumar, president of the Bodh Gaya Tourist Guide Association, said that three years ago, the two-week festival attracted 5,000 to 8,000 domestic and international tourists daily, but now the numbers have fallen to a few hundred each day. 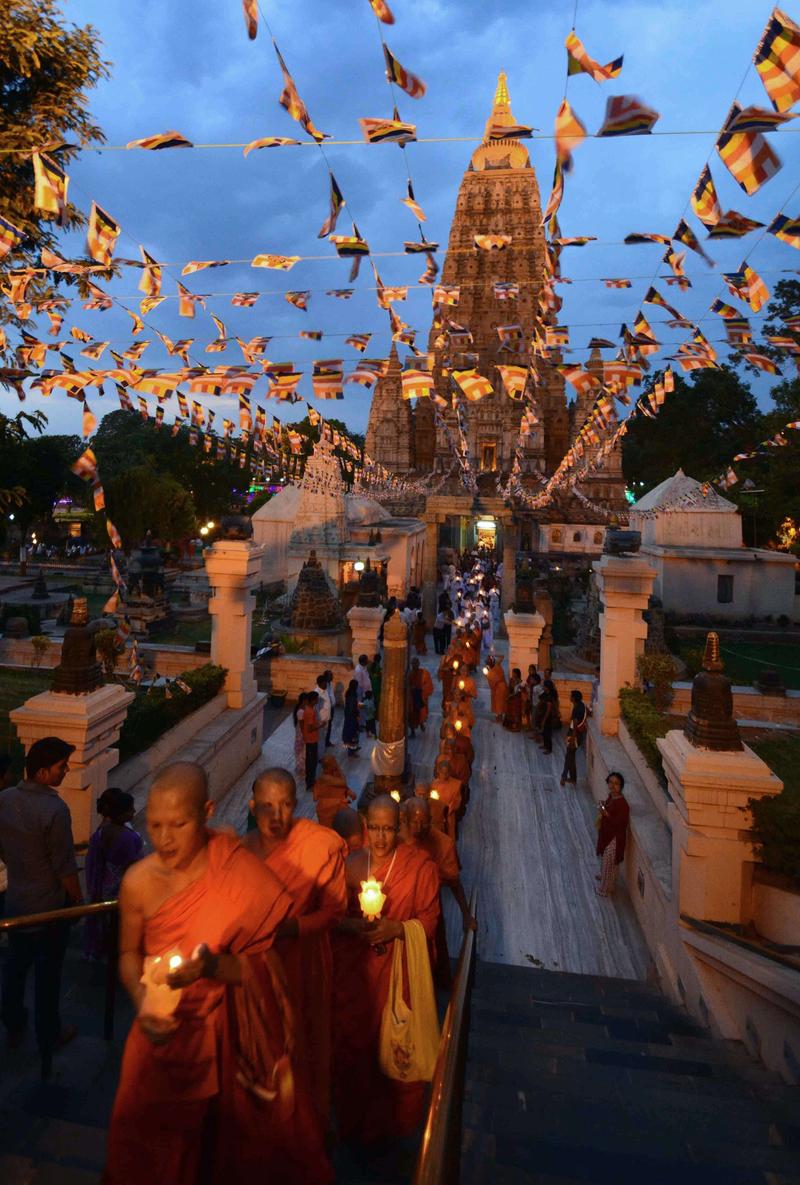 The Buddha Purnima festival is celebrated in Bodh Gaya, India, in 2014. (PHOTO / AFP)

The festival has attracted Buddhists over the centuries, but the decision to celebrate it as Buddha's birthday was taken at the first conference of the World Fellowship of Buddhists in Colombo, capital of what is now Sri Lanka, in 1950, according to Buddhist scholars. In 1999, the UN gave the festival international recognition.

Hotel owners in Bodh Gaya said they have no earnings due to the pandemic, as they mostly depend on the flow of overseas tourists, who will not return until international flights resume.

Gaya airport, about 5 km from the city, used to handle flights from Thailand, Vietnam, Myanmar, Cambodia, Laos, Malaysia and Sri Lanka, but they have been halted during the pandemic.

However, domestic flights to the airport from New Delhi, Kolkata and Mumbai are now operating again.

Thailand and Myanmar have expressed an interest in resuming flights to the airport, starting in September, according to the facility's director, Bangjeet Saha, who said three Pacific Airlines chartered flights from Vietnam carrying pilgrims and tourists landed at the airport in March.

Street vendors selling antiques, trinkets, Buddha statues and other items are also having a hard time. Salesman Ritesh Shaw, said: "The roadsides in Bodh Gaya used to be packed with tourists, but now they are deserted. We hope that once domestic and international tourists start arriving, business will begin to thrive again."

The number of overseas pilgrims visiting Bodh Gaya fell to 406 last year, down from 253,787 in 2019, due to the pandemic, according to the Bihar government's tourism department.

Kaulesh Kumar, secretary of the Association of Buddhist Tour Operators, said there are about 200 hotels and three dozen monasteries in the Bodh Gaya area that can accommodate a total of about 40,000 tourists, but most of the hotel rooms are now empty.

Vijay Kumar, a member of the Indian parliament from Bodh Gaya, said that with assistance from the central and state governments, many beautification efforts have been launched in and around the city. A ring road from Patna to Bodh Gaya will open soon to ease traffic congestion, and the local authorities have started removing silt from the Niranjana river, a sacred waterway for Buddhists and Hindus.

The runway at Gaya airport will be extended, while a master plan has been designed by the Airport Authority of India to give the facility a facelift, Vijay Kumar said, adding that a proposal has been sent to the federal civil aviation minister, calling for the resumption of international flights.

Shripad Yesso Naik, India's junior tourism minister, said Bodh Gaya is a key destination for visitors and is included in a central government plan for the integrated development of theme-based tourist destinations. As part of the plan, $12.7 million has been allocated for construction of a convention center in Bodh Gaya.

"I have visited the city many times to assess the situation there, and I think that there are many areas that can be developed. Our ministry will bring a world-class tourism infrastructure to Bodh Gaya," Naik added.

G. Kishan Reddym, the federal tourism minister, said in a written reply to the Indian parliament in December that an action plan has been devised by the tourism ministry for a coordinated strategy for the revival of India as a global center of Buddhist culture and tourism, with a special focus on Bodh Gaya.

The local government has also approved a ropeway project at the Brahmayoni, Pretshila, Dhungeshwari and Vanavar hills near the city. 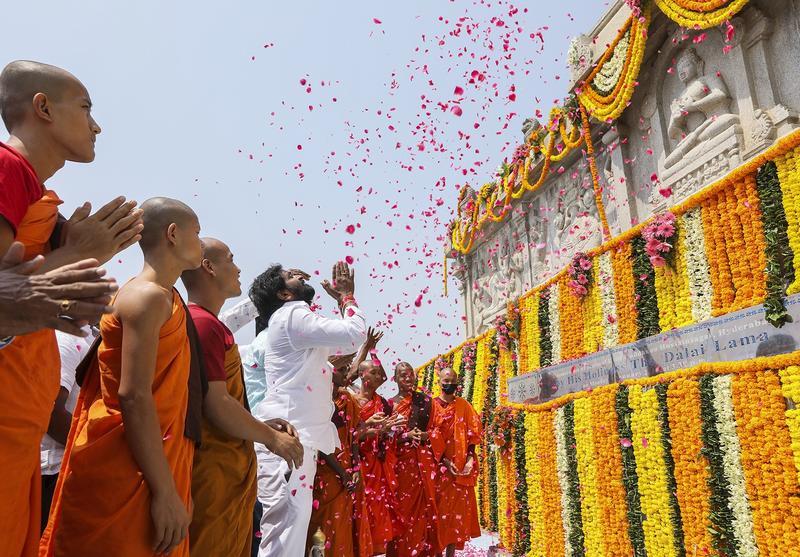 Monks and visitors offer prayers near a statue of Buddha during the Buddha Purnima festival in Hyderabad, India, this year. (MAHESH KUMAR A / AP)

Last month, Bihar Chief Minister Nitish Kumar inaugurated the Mahabodhi Cultural Center in Bodh Gaya. The venue has an auditorium with a capacity of 2,000, two large conference halls, a dining hall that can seat 800, an art gallery and an audiovisual room that meets international standards.

Renu Devi, deputy chief minister of Bihar, said: "We are working to develop Bodh Gaya as one of 16 iconic destinations in India. We are also working to provide all types of facilities for Buddhist monks and tourists visiting the city."

Bodh Gaya is also home to many stunning Buddhist monasteries and pagodas run by foreign nationals and overseas organizations.

The Bodh Gaya Temple Management Committee closed the venue to visitors from March to September 2020 and again from April to August last year to prevent a surge in COVID-19 cases. A complete lockdown was imposed, with hotels and monasteries closing their doors to visitors as Bihar witnessed a surge in infections.

Harpreet Kaur, senior police superintendent, said the authorities in Bodh Gaya have now lifted all restrictions, and no cases of COVID-19 have been reported in the city since January. "We are keeping a close watch, and security arrangements were strengthened ahead of the Buddha Purnima festival," Kaur said.

According to a census in 2011, there were 8.5 million followers of Buddhism in India, while a census taken last year put the figure at about 10 million. The states of Maharashtra, Madhya Pradesh, Uttar Pradesh and West Bengal, along with those in the northeast of the country, have large Buddhist populations, according to the 2021 census.

Buddha Purnima, which is a public holiday in India, was celebrated this year in many places where COVID-19 restrictions had been lifted.

The festival was marked enthusiastically at popular pilgrimage sites in Uttar Pradesh and Bihar. Buddhists performed prayers, sermons and scripture recitals at these sites and also distributed food and clothing to the destitute. Widespread celebrations were also held in Buddhist areas such as Arunachal Pradesh and Ladakh.

For the festival, celebrants wear white clothing, meditate and only eat vegetarian food. The occasion is also often celebrated with the preparation of kheer, an Indian dessert that is offered to Buddha.

The celebrations in Bodh Gaya started with a procession from the city's 24-meter-high Buddha statue to the Bodhi Tree behind the temple. Hundreds of monks, devotees－including members of the International Buddhist Council－and the public took part in the procession.

The temple premises and adjoining area were adorned with colorful bunting, flowers and other decorative items. The festival was also celebrated in the evening with a procession from the temple.

"Special prayers and recitations of sacred scriptures for world peace were organized under the Bodhi Tree," a member of the Bodh Gaya Temple Management Committee said.

As in the previous two years, there were no Chinese tourists in Bodh Gaya, as direct flights between India and China have been halted due to the pandemic, the committee member said.

N. Dorjee, the committee's secretary, said that before the pandemic emerged, hundreds of monks and devotees from China, Sri Lanka, Thailand, Vietnam, Myanmar, Cambodia, Laos and Malaysia used to attend the festival every year.

This year, the festival was celebrated in several areas of New Delhi, the Indian capital. The city's Karuna Buddha Vihar temple began the day with prayers, later released birds and fish in the Yamuna river, and also organized cultural events to mark the event.