Authorities are challenging negative stereotypes of seniors so their experience can make a contribution to the public good. Wang Xiaoyu reports. 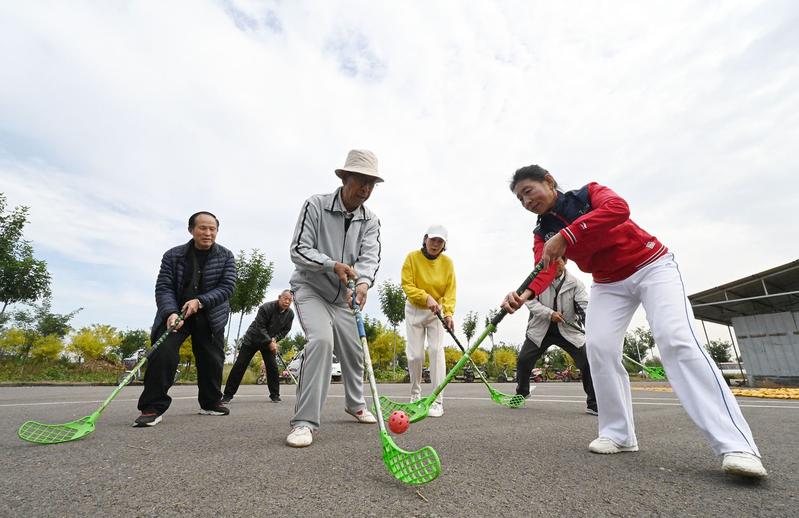 Seniors play floorball in Handan, Hebei province, as a part of activities to celebrate the Chongyang Festival in October. (HAO QUNYING / FOR CHINA DAILY)

From giving directions to tourists to mediating quarrels between neighbors, 64-year-old Liu Xiaoxia has been volunteering in Beijing's Xicheng district for more than two decades. Despite her advancing years, Liu's passion for community work is undimmed.

This year, she trained as a city volunteer for the 2022 Beijing Winter Olympic Games in February. During the event, she helped visitors and provided advice at a station near the Shichahai scenic area, home to one of the capital's most popular ice rinks.

"For example, when a child felt hungry after skating for a while, I offered hot water to help the parents prepare milk powder, and when some seniors complained about feeling chilly outside, I invited them to take a break inside," she said.

"I am very happy that as an older person, I can still make a contribution. Even though I'm getting old, I believe a small helpful gesture from me can make a difference." 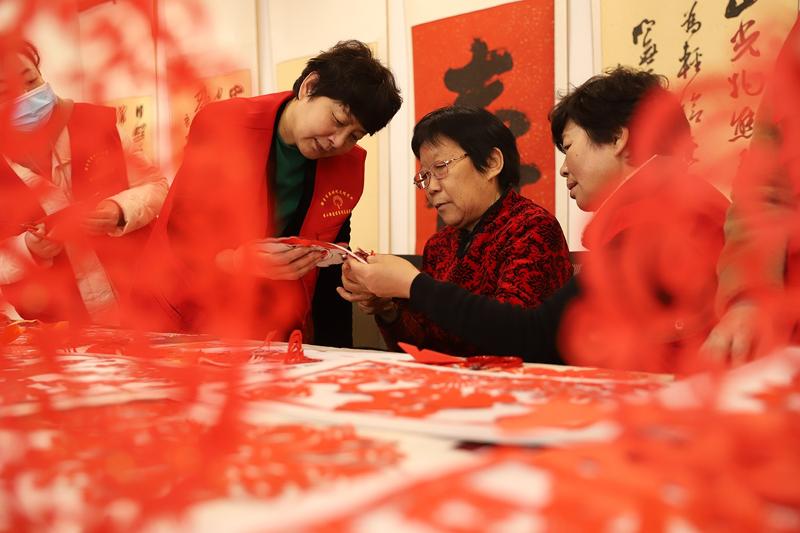 Liu's positive approach is emblematic of a growing number of Chinese seniors as the country's population ages rapidly.

Driven by low birthrates and longer life spans, people age 60 and older accounted for 18.9 percent of the population nationwide last year, a rise of 5.64 percentage points from 2010, according to data released by the National Bureau of Statistics in January.

During a recent academic conference in Beijing, Lu Jiehua, a professor of demographics at Peking University, said that even though some provinces have become "moderately aged", China's overall average level of aging is mild compared with some developed countries, such as Japan and South Korea.

He added that one feature of the nation's aging trend is the high proportion of "relatively young" seniors age 60 to 69. "It is important to take advantage of this feature while guaranteeing the rights and quality of life of all seniors," he said. 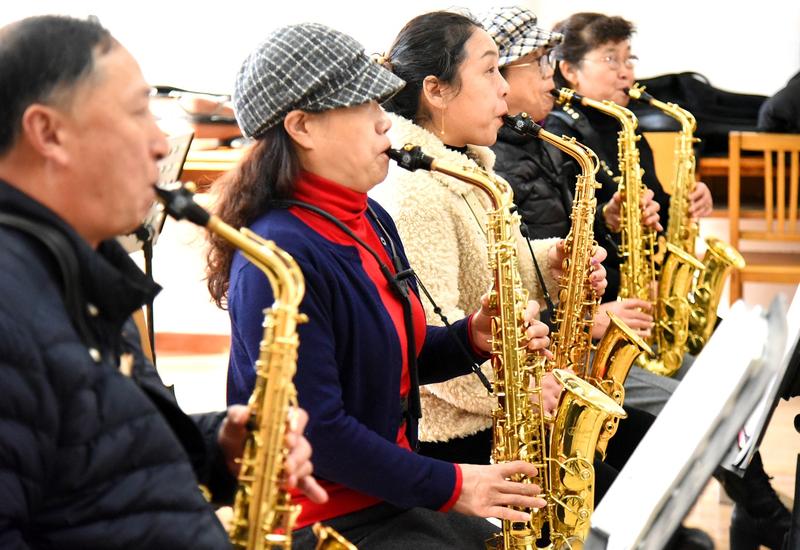 Students at a seniors' university learn the saxophone in Lianyungang, Jiangsu province, in December. (GENG YUHE / FOR CHINA DAILY)

The subject of how to cope with aging as individuals and as a nation prompted in-depth discussions among political advisers and legislators during this year's two sessions－the largest annual event in the nation's political calendar－which ran from March 4 to 11.

The Government Work Report, released on March 5, pledged that more efforts will be devoted to "proactively responding to the aging population and on improving elderly care in urban and rural areas".

Yuan Wen, president of Shanghai Normal University and a member of the 13th National Committee of the Chinese People's Political Consultative Conference, said experts have predicted that the number of people age 60 and older will reach 400 million in 2035 and 487 million in 2050. Last year, the figure was about 267 million.

"However, the idea that the elderly are simply a burden still exists. More efforts are needed to reach a consensus that seniors can make achievements and to establish frameworks to encourage their participation in social activities while ensuring their safety," Yuan said.

One approach would be to guide the participation of more seniors in volunteer activities by providing them with suitable opportunities and incentives, she added.

According to China Women's News, the number of volunteers like Liu in Xicheng district has reached more than 70,000. As 70 percent of them are female and most are age 58 to 65, they have gained the affectionate nickname of the "Xicheng Aunties". 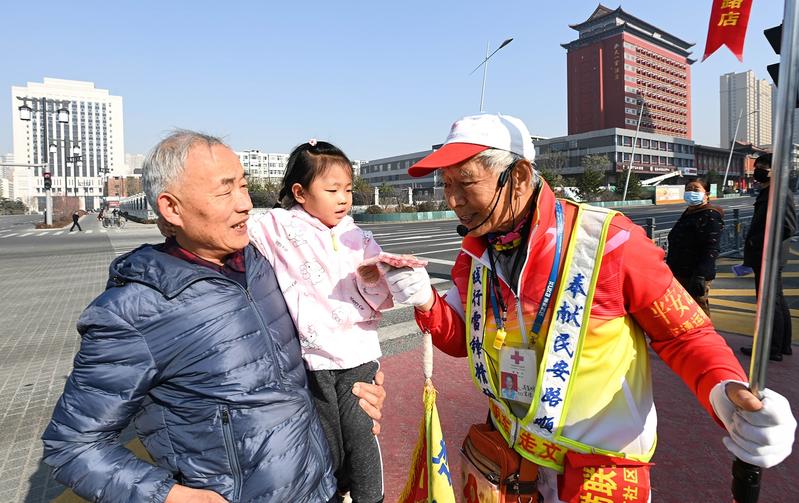 A man in his 80s has volunteered to direct traffic in Taiyuan, Shanxi province, for 11 years. (CHAI TING / XINHUA)

Speaking on the sidelines of the fifth session of the 13th National Committee of the CPPCC, Huang Gairong, head of the gerontology department at the Henan Provincial People's Hospital, said seniors are a major force in the promotion of cultural inheritance and the development of society.

She cited the examples of Zhong Nanshan, a prominent respiratory expert who remained active on the front line of the battle against COVID-19 in his 80s, and Tian Hua, a 93-year-old actress who attended an event during this year's Spring Festival Gala to chat with students majoring in acting.

"It is suggested that seniors should have a positive mindset and take part in social activities," Huang said. "Society should also view the rising number of seniors in a positive light and create conditions to help them remain active."

"There are many ways to spend time after retirement. For us, volunteering nourishes our minds," Yao Shuying, a member of the volunteer team, told local media. "To be able to offer help within our capabilities makes us feel content and valued."

"They are also very familiar with people in their residential complexes, so they can help inform us and track down high-risk groups more efficiently," she added. 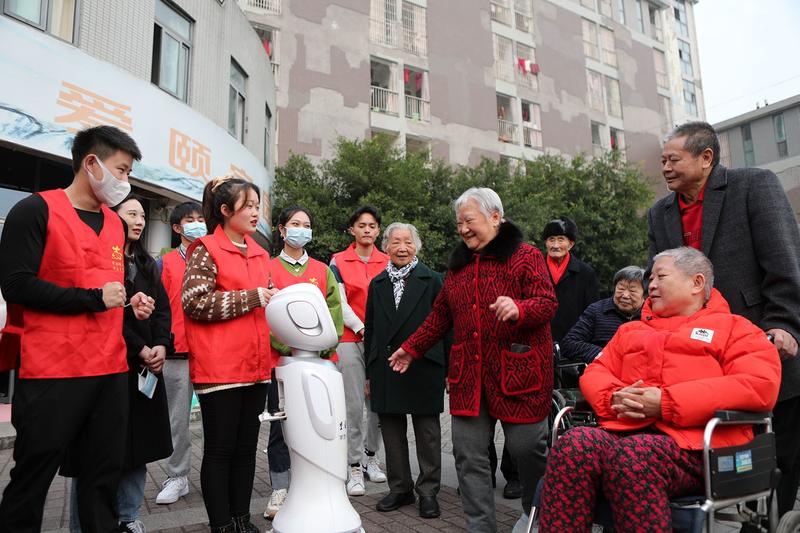 Elderly people engage with a robot at a care center in Chongqing. (CHEN SHICHUAN / FOR CHINA DAILY)

A number of regions have also started promoting the "time bank" concept, a mutual assistance model that provides a platform for seniors to undertake valuable work and help ease the burden on caregivers.

Through time banks, seniors can earn credits by caring for people older than themselves. In turn, they can redeem the credits when they need care.

Yuan, the political adviser, said the time bank system should be further improved to raise awareness among the elderly. In Shanghai, where over 23 percent of residents are age 60 or older, more than 75 seniors age 60 to 70 have opened accounts at a time bank in Changning district.

Gu Huayun, 67, has volunteered as a meal assistant at a community center near her home. She helps seniors who don't know how to work the self-service kiosk to order meals, and she also delivers meals to people who have difficulties in picking the food up themselves.

For every hour she spends on volunteer work at the center, Gu gains one "credit" in her account, she said in an interview with ThePaper.cn, an online news platform.

"I am relatively young and have nothing else to do at home," she said.

"I had better seize the moment while I am still healthy and mobile enough to make a contribution and help others. In return, I will also be able to access elderly care services in the future."

Li Jiuheng, a 67-year-old Beijing resident, said that during his many volunteer visits to the homes of other seniors, he has found that loneliness is the biggest concern for many older people.

"In this respect, an older person like me is more capable of talking with seniors than young volunteers because we often share similar experiences and have interests in common," he said.