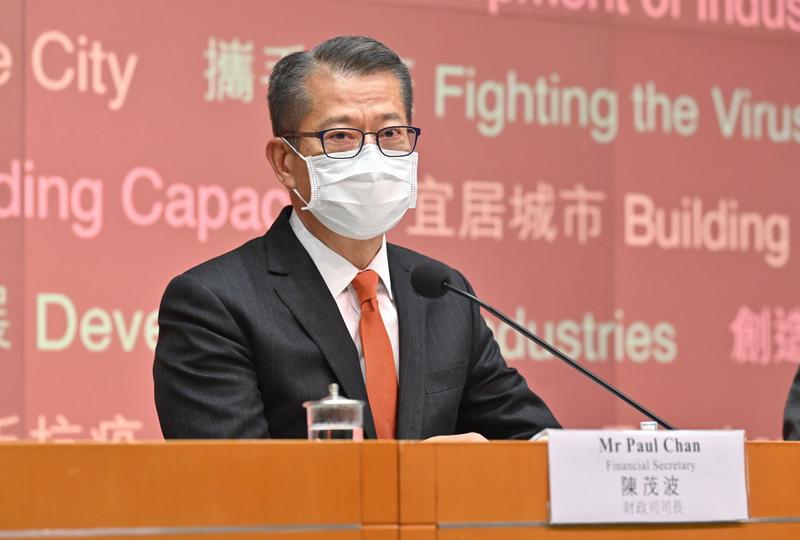 The Hong Kong government is set to foster a more vibrant and diversified economy through innovation and technology development by doubling down on its financial support to local startups, universities and intellectual property regimes, according to the Budget 2022-23 delivered by Financial Secretary Paul Chan Mo-po on Wednesday.

Hong Kong’s economic growth and re-industrialization hinges on I&T development, which improves efficiency and productivity across all industries. As such, the Hong Kong Special Administrative Region government is determined to provide continuous support to the I&T sector with the ultimate goal of establishing Hong Kong as an international I&T hub, in line with the objective set in the National 14th Five-Year Plan (2021-25), said Chan.

To spur the relatively established startups to branch out their businesses, Paul Chan said he will increase by an additional HK$10 billion funding to the Hong Kong Growth Portfolio, an investment portfolio initiated by Chan in his Budget two years ago

He acknowledged the current-term government’s investment of over HK$130 billion ($16.65 billion) for cultivating a vigorous I&T ecosystem, which has come a long way. The number of startups surged from around 1,000 in 2014 to around 4,000 last year, with the amount of venture capital investment soaring from HK$1.24 billion to about HK$41.7 billion in the same period.

While there are venture fund schemes in place, including the HK$2 billion Innovation and Technology Venture Fund, and the Corporate Venture Fund and Cyberport Macro Fund through the Hong Kong Science and Technology Parks Corporation and the Cyberport respectively, “the funds are mainly targeted at early stage startups, they may not be suitable for expanding enterprises with considerable scale,” Chan said.

To spur the relatively established startups to branch out their businesses, Chan said he will increase by an additional HK$10 billion funding to the Hong Kong Growth Portfolio, an investment portfolio initiated by Chan in his Budget two years ago, of which HK$5 billion will be used to set up a new investment fund, namely the Strategic Tech Fund.

Apart from its support for enterprises, the government aims to step up its incentives for knowledge transfer in local universities, doubling the amount of subsidy to HK$16 million for R&D outcome commercialization. “The increased subsidy will be provided to startups of universities with private investments on a matching basis of one to one. Each startup may receive an annual subsidy of up to HK$1.5 million for a maximum of three years.  The initiative will incur an additional expenditure of HK$48 million per year,” Chan said.

Technology innovation comes with intellectual property, which is a key signifier of an economy’s I&T capacity and competitiveness. Cognizant of the importance of patents in terms of encouraging R&D and making economic profits, the government will further promote and develop “Hong Kong’s ‘original grant patent’ system,” said Chan. “In the next three financial years, I will allocate a total of about HK$85 million to the Intellectual Property Department for enhancing Hong Kong’s capacity to conduct substantive examination in processing OGP applications.”

Johnny Hon, founder of venture capital and investment company Global Group, applauds the government’s endeavors and vision in promoting I&T development. “Funding fledging startups to take off and supporting relatively mature enterprises to secure more private equity funds should go hand in hand,” said Hon. Underscoring the importance of empowering startups in their early stage, which are often run by young entrepreneurs, he said: “Helping their businesses to grow is to lend them more agency for social mobility, incentivizing them to innovate more and better.”

Kevin Lau, a co-founder of the Hong Kong Coalition and a council member of the Chinese Young Entrepreneurs Association, welcomes the government’s endeavors in pumping more funding into the startups and local academies for technology application. “This is a good start and the right direction to go,” Lau said. But there’s more to do, he added. Support for the startups will help raise Hong Kong’s game in luring more foreign companies and investors to the city, he said. “But before that we have the costly housing rental and insufficient access to international schools to contend with because some foreign entrepreneurs would bring their family along.”

Lau also emphasizes the need for the government to spell out how much of the funding to universities will be allocated to knowledge transfer and, more importantly, collaboration on technology application between universities and private enterprises.

Hon expects the government to place a higher premium on nurturing a “deep technology” mindset and ecosystem. Deep tech innovations refer to technology solutions invented by startup companies to answer substantial scientific or engineering challenges, such as in biomedicine and quantum computing. Research is key to developing deep tech innovations.

Hon said he has noticed a trend of startups to rush to translate their ideas into prototypes and bring their products to the market. “It’s too profit-driven. For a startup, hitting the market too quickly is not necessarily a good thing. It discourages a startup’s sustainable growth, jeopardizes its long-term economic strategy, and harms the whole financial sector,” Hon said.

Boasting an established and robust legal system, including IP protection laws, Hong Kong presents itself as a perfect environment for deep technology innovation, Hon said. He encourages local scientists, academics and startups to register patents under the government’s favorable IP regimes and sell them to mature companies in the Guangdong-Hong Kong-Macao Greater Bay Area or other cities in the Chinese mainland for further R&D commercialization.