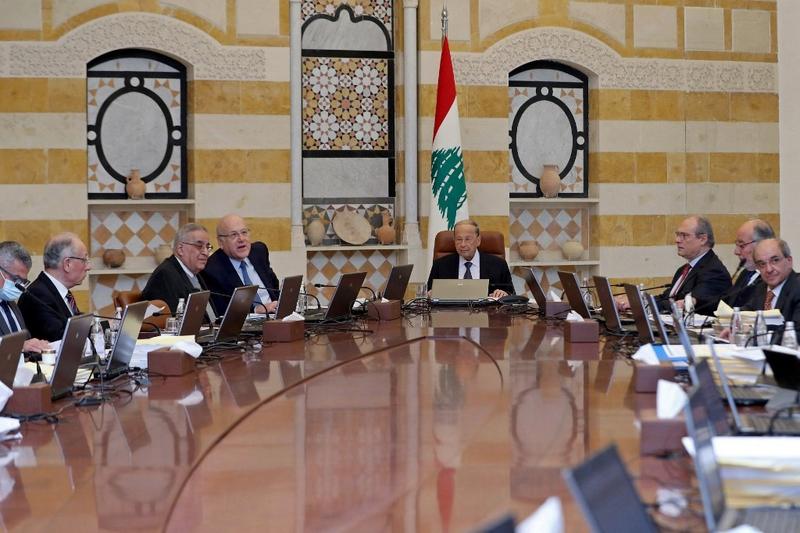 A handout picture provided by the Lebanese photo agency Dalati and Nohra shows Lebanese President Michel Aoun holding a cabinet meeting at the presidential palace in Baabda, east of Beirut, on Jan 24, 2022. (DALATI AND NOHRA / AFP)

BEIRUT  - Lebanese President Michel Aoun said on Saturday he saw no reason for a delay to parliamentary elections in May after three-times former prime minister Saad al-Hariri announced he was boycotting the vote and stepping away from politics.

Hariri has been Lebanon's leading Sunni Muslim politician since inheriting the mantle of his father, Rafik al-Hariri, after his assassination in 2005.

The move opens a new phase in Lebanon's sectarian politics and adds to the uncertainties facing a country suffering a financial meltdown that marks the biggest threat to stability since a 1975-90 civil war.

"I emphasized to His Eminence the Mufti the role played by the honourable Sunni community in preserving Lebanon's unity and political diversity, and the importance of participation with all components of Lebanon in national and political life," Aoun said.

"We are carrying out all the necessary preparations for holding the elections on time, and I do not see any reason for delaying them."

Western states want the vote to go ahead on time.

Together with its allies, the Iran-backed Shi'ite Muslim group Hezbollah, which is designated a terrorist group by the United States, won a parliamentary majority in 2018.

A boycott by Hariri and his Future Movement will affect the 20 seats they won in 2018, and many more won by other groups in local alliances with Future.

On Friday, Saad's older brother, Bahaa, signaled he was entering politics, saying he would "continue the journey" of his father.

He plans to support candidates but will not be running himself, his media advisor said.

Bahaa has been fiercely critical of Hezbollah, and the compromising approach adopted by Saad towards the group in the later years of his career.