Japan rules out changes to virus curbs despite Omicron 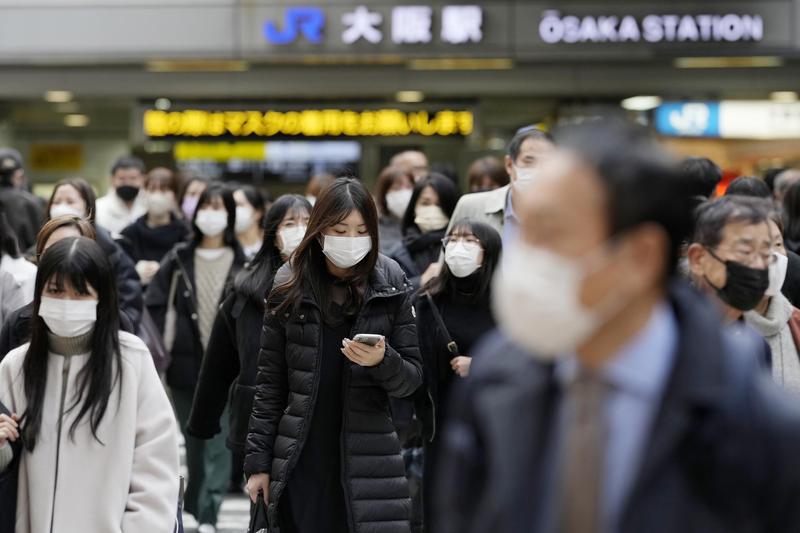 The government confirmed on Wednesday that a family of three based in the western city of Osaka were infected by the Omicron variant and the origin of how they had caught the virus could not be traced.

And on Thursday, the governor of neighboring Kyoto prefecture said that a community infection was confirmed in a woman in her 20s, with authorities investigating seven of her close contacts.

The government has started preparations to expand free testing to people who don't have COVID-19 symptoms in an attempt to prevent the spread of the Omicron variant, news agency Jiji reported on Thursday citing unnamed government sources.

Shigeru Omi, the nation's top health advisor, urged caution before people travel or gather with family and friends during the holiday season.

"Now that the Omicron strain has been confirmed as a community-acquired infection, there are concerns that it may spread further, so please be cautious when holding year-end or New Year's parties," he told reporters. 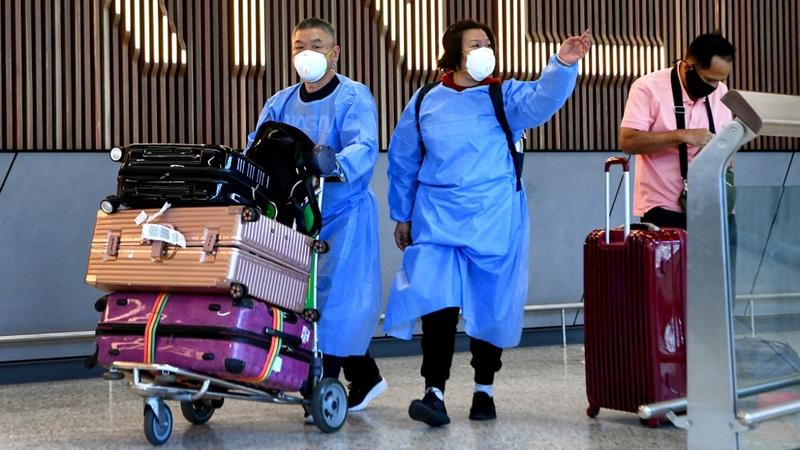 Australia's two most populous states re-introduced COVID-19 curbs on Thursday as daily infections hit their highest amid an outbreak of the highly infectious Omicron variant and a rush on already-stretched testing clinics.

New South Wales state, home to a third of Australia's 25 million population, said it was again making it mandatory to wear masks indoors in public places, while venues were told to limit visitors and re-activate customer check-in via QR code.

Victoria state, which has nearly the same population, also re-introduced a mask mandate, citing the need to reduce the stress on the health system.

The changes two days before Christmas are a stumble in the country's plans for a permanent reopening after nearly two years of stop-start lockdowns as the new variant rages through the community in spite of double-vaccination rates of more than 90 percent.

Hospitalizations and deaths remained low, but the explosion of infections had created a risk of healthcare workers being furloughed by testing positive, the authorities said.

The country recorded more than 8,200 new cases, by far its biggest daily rise since the pandemic began, from a previous record of 5,600 a day earlier, mostly in NSW and Victoria.

Until Thursday, New South Wales Premier Dominic Perrottet had urged the state to hold steady on a plan, agreed between state and federal leaders, to remove restrictions once the vaccination rate exceeded a certain level.

Perrottet had steadfastly refused to re-introduce mandated indoor mask wearing, a move called on by the country's doctors and health wrokers, saying it was now time to live with COVID-19.

Public booking for COVID-19 vaccine booster shots has begun on Wednesday in Brunei.

According to Brunei's Ministry of Health, booster shots will be administered to individuals aged 18 and above, who have completed their second dose of vaccine

According to Brunei's Ministry of Health, booster shots will be administered to individuals aged 18 and above, who have completed their second dose of vaccine.

Meanwhile, the third shots on a walk-in basis, which started on Dec 17, are still available but are limited to the elderly, pregnant women and breastfeeding mothers and differently-abled individuals.

As of Dec 21, 94.4 percent of Brunei's population had received at least one dose of the COVID-19 vaccine, while 92.6 percent had completed their vaccination schedule of two doses and 10.7 percent had received three doses.

The country reported eight new confirmed cases of COVID-19 on Wednesday, bringing the total tally to 15,426.

A total of 155 active cases are still being treated and monitored in Brunei and 100 patients have passed away so far in the country.

Indian Prime Minister Narendra Modi is scheduled to hold discussions with state chiefs on Thursday on containing the possible surge of Omicron cases ahead of the festive season, as gatherings in public spaces and markets gain momentum.

India has recorded 236 Omicron coronavirus cases across 16 states over the last 24 hours, the federal health ministry said, more than double from last week.

While more than half of India's adult population is fully vaccinated, hundreds of millions are still at risk. Doctors warn that if an Omicron-fueled third wave of infections hits the country, medical facilities could be over-run very quickly.

Modi's government came under scathing criticism during the summer when India's health system was overwhelmed by a deadly second wave that killed tens of thousands of people.

Residents in the capital New Delhi scrambled for beds as oxygen supplies ran out and ambulances fell short and morgues ran out of space.

This week, authorities in New Delhi announced a partial ban on public celebrations for Christmas and New Year's Eve in a bid to prevent overcrowding.

Lebanon's Higher Defense Council decided on Wednesday to extend the general mobilization period to the end of March 2022 in light of the recent increase of COVID-19 cases in the country, a statement by Lebanon's Presidency reported.

The council, which convened in the presence of Lebanese President Michel Aoun, urged security agencies to be cautious and strict with regard to measures adopted in public places to control the further spread of the pandemic.

It also requested military and security agencies to be ready to guarantee a stable and secure environment during the holiday period.

Lebanon recently witnessed a remarkable surge in COVID-19 cases, prompting the cabinet and Health Ministry to issue a new set of measures to control the spread of the pandemic while encouraging people to increase vaccination.

Lebanon's total number of COVID-19 infections stands at 703,555, while its death toll from the virus reached 8,965, according to Lebanon's Health Ministry on Tuesday.

Mongolia's Health Ministry on Wednesday confirmed 328 new COVID-19 cases over the past 24 hours, bringing the national tally to 388,872.

Among the latest confirmed cases, 125 were imported from abroad, and most of them are peacekeepers who have recently returned home from South Sudan, the ministry said.

Meanwhile, three more COVID-19 patients died in the past day, pushing the national death toll to 1,977.

So far, around 66 percent of Mongolia's population of 3.4 million have received two COVID-19 vaccine doses, while 870,175 people have had a booster.

New Zealand reported 56 new Delta cases of COVID-19 in the community on Thursday, bringing the total to 10,432 in the country's current community outbreak.

Among the new infections, 42 were recorded in the largest city of Auckland, four in nearby Waikato, six in Bay of Plenty, one in Taranaki, one in Tairawhiti and two in the Lakes district, according to the health ministry.

A total of 48 cases are being treated in hospitals, including seven in intensive care units or high dependency units, a ministry statement said.

The number of confirmed COVID-19 cases in New Zealand stands at 13,278 currently, said the health ministry.

Around 95 percent of eligible people in the country have received their first dose, and 91 percent are fully vaccinated.

The Philippines on Thursday approved emergency use of Merck & Co Inc's  COVID-19 treatment pill for adult patients at risk of developing severe illness as it tries to boosts the country's arsenal of drugs to fight new variants.

It also approved the Pfizer-BioNTech COVID-19 vaccine for children aged 5-11 so the vaccine, which will be administered in a paediatric formulation, could be administered once it becomes available, its Food and Drug Administration chief said.

FDA chief Rolando Enrique Domingo told a public briefing the benefits outweighed the risks and it was already being used for children in countries like the United States and Canada.

In October, the FDA allowed 31 Philippine hospitals to use Merck's molnupiravir, the world's first oral antiviral medication for COVID-19, under a compassionate use permit even before approval for its wider use. 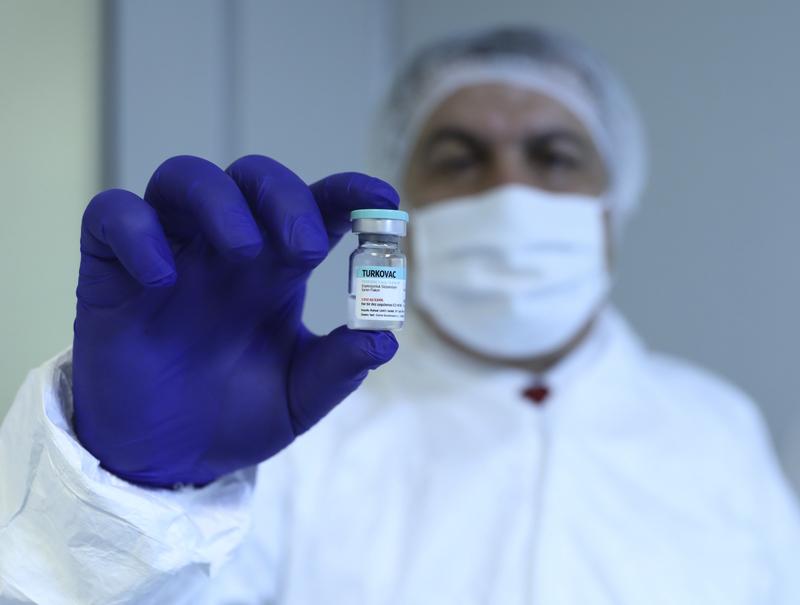 Turkey's domestically developed COVID-19 vaccine, Turkovac, has received emergency use authorization by Turkish authorities and will be open to use from next weekend, Health Minister Fahrettin Koca said on Wednesday.

Turkey began developing Turkovac this year, but the launch date for the vaccine has been beset by delays. President Tayyip Erdogan has said Turkey would make the shot available globally.

Turkey's daily infection numbers have hovered around 20,000, while the daily death toll remains near 200.

A man receives the Sinopharm COVID-19 coronavirus vaccine inside an empty classroom in Hanoi on Sept 10, 2021. (NHAC NGUYEN / AFP)

Vietnamese Prime Minister Pham Minh Chinh has requested localities not to hold activities with large gatherings, especially during the New Year and its traditional Lunar New Year festivals amid complicated developments of the COVID-19 pandemic.

Chinh made the order at a recent teleconference while asking for more drastic actions to prevent and control the pandemic nationwide, the Vietnamese Government Office said in a notice issued late Wednesday.

In recent days, the number of new infections and deaths from the pandemic has been increasing in many localities, mainly due to the resumption of socio-economic activities, fast transmission of the Delta variant, and people's negligence, read the notice.

The prime minister also urged quicker progress in vaccinations, demanding that the injection of second shots to those aged above 18 must be finished within this year, while that for those aged 12-18 must be done in January 2022.