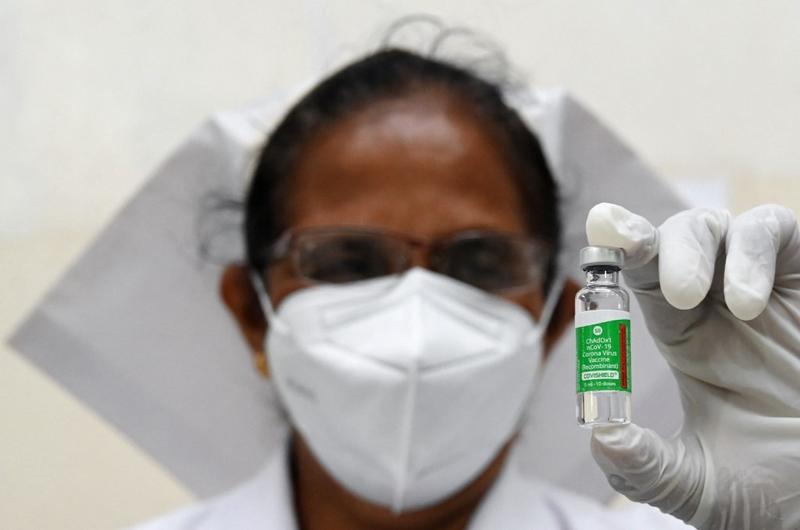 A health worker shows a dose of Covishield, AstraZeneca/Oxford's COVID-19 coronavirus vaccine made by India's Serum Institute, at a government hospital in Homagama on Jan 29, 2021. (LAKRUWAN WANNIARACHCHI / AFP)

NEW DELHI - India is struggling to export its surplus of COVID-19 vaccines as logistical hurdles delay their use in many countries despite low levels of inoculation, vaccine producer the Serum Institute of India (SII) and a government official said on Tuesday.

The SII, the world's biggest vaccine maker that produces the AstraZeneca, Novavax and Sputnik COVID-19 shots, has already announced plans to temporarily halve output of the AstraZeneca drug until more orders came, including possibly through boosters.

Some 8 percent of Africa's total population of about 1.3 billion is fully immunized. India, with the same population, has fully vaccinated 37 percent of them with the goal to administer two doses in all of its 939 million adults by next month

"All over the world, there is enough supply but it is getting the jabs in arms, which will take some time," SII Chief Executive Adar Poonawalla told a virtual conference organized by the Confederation of India Industry.

"Certain countries have only vaccinated to the tune of 10 or 15 percent of the population, they really need to go to 60-70 percent. Demand is very much there, but it's going to be spread out now that the supply has superseded the monthly demand."

Top Indian health official Vinod Kumar Paul told the same event that current global COVID-19 vaccine production was enough to reach the nearly 3.6 billion who have yet to receive a shot.

"India is in a position to offer vaccines, but is there traction (for it)?" he asked. "The debate should be how do we accelerate the delivery, raise the capacity of absorption in many countries, particularly in the African continent."

Africa's disease control body said late last month many of its nations were struggling with vaccine logistics, as inflows increased suddenly after months of delays.

Some 8 percent of Africa's total population of about 1.3 billion is fully immunized. India, with the same population, has fully vaccinated 37 percent of them with the goal to administer two doses in all of its 939 million adults by next month.

India's vaccine demand was only about 252 million doses in the past month, against a domestic production capacity of more than 345 million a month of its three main approved shots alone.

The SII's monthly output of the AstraZeneca vaccine, which it brands Covishield, has nearly quadrupled since April to 250 million doses. The shot dominates India's immunization program but the company has no further orders from the government.

The COVAX platform that distributes vaccines mainly to low-income countries has sought only about 40 million doses of Covishield from the SII between November and December after New Delhi lifted a ban on exports.

COVAX, which has an option to buy up to 550 million Covishield doses, is no longer as reliant on the SII as it was before India abruptly stopped vaccine exports in April to inoculate its own as infections surged. Many vaccines have been approved since then.

"It is critical that if India is to remain the pharmacy to the world that it continues to supply even during difficult times," Seth Berkeley, CEO of COVAX backer Gavi, told the industry event.

READ MORE: Vaccines give China and India a chance to boost cooperation