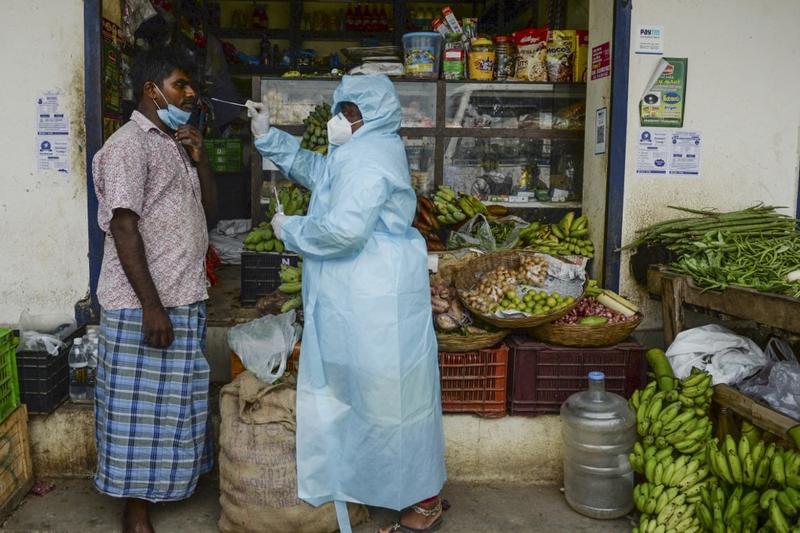 A health worker takes a swab sample from a shopkeeper for a RT-PCR Covid-19 test in Chennai on April 10, 2021. (ARUN SANKAR / AFP)

India is facing an escalating health crisis, with its second wave of virus infections hitting record highs, overwhelming hospitals around the country as supplies of intensive care beds and vital drugs come under pressure.

Across the South Asian nation, from the wealthiest and also the worst-hit state of Maharashtra to its most populous, Uttar Pradesh, reports are emerging of hospital beds running short and immunization centers turning away people as they run out of vaccines.

India reported a record high of 152,879 new COVID-19 cases on Sunday, taking the total tally to 13,358,805, according to data released by the federal government.

Besides, 839 people died in the past 24 hours, the highest this year so far, bringing the death toll to 169,275, the ministry's data showed.

It was the sixth time within this week, and the fifth consecutive day, when more than 100,000 new COVID-19 cases were reported in India.

There are still 1,108,087 active cases in the country, while 12,081,443 people have been discharged from hospitals after medical treatment.

Cambodia on Sunday confirmed 157 new COVID-19 cases and three more fatalities in the last 24 hours, the country's Ministry of Health (MoH) said in a statement.

The new infections included 156 local cases and one imported case.

The imported case was found on a 43-year-old Nigerian man arriving in the kingdom on Friday from Nigeria via a connecting flight in South Korea.

According to the MoH, since the start of the pandemic in January last year, the Southeast Asian country has officially registered a total of 4,238 confirmed COVID-19 cases, with 29 deaths and 2,152 recoveries.

According to the ministry, 5,219 more people were discharged from hospitals, bringing the total number of recovered patients to 1,414,507.

Iran on Saturday enforced a 10-day restriction throughout the country to curb the recent resurgence of coronavirus cases and deaths.

"From Saturday on, for at least ten days, travel to and from high-risk cities will be banned and non-essential businesses have to roll down their shutters. Schools, entertainment centers, and all public places will also be closed," the Iranian news network Press TV reported.

The country now is facing the fourth wave of COVID-19 infection as its national caseload surpassed 2 million earlier this week.

The new cases included 2,833 in Iraqi capital Baghdad, 792 in Basra, 481 in Wasit, 396 in Duhok, and 379 in Diyala, while the other cases were detected in other provinces, the ministry said in a statement.

A total of 8,469,899 tests have been carried out across the country since the outbreak of the disease in February 2020, with 41,040 done during the day, the statement said.

Israel's Ministry of Health reported 137 new COVID-19 cases on Saturday, raising the total infections in the country to 835,811.

The death toll from the virus rose by 12 to 6,292, while the number of patients in serious conditions decreased from 270 to 268, out of 429 hospitalized patients.

The total recoveries in Israel rose to 825,515 after 320 newly recovered cases were added, while the number of active cases decreased to 4,004.

The number of people vaccinated against COVID-19 in Israel has reached nearly 5.31 million, or 57.1 percent of its total population, since the vaccination campaign began on Dec. 20, 2020. 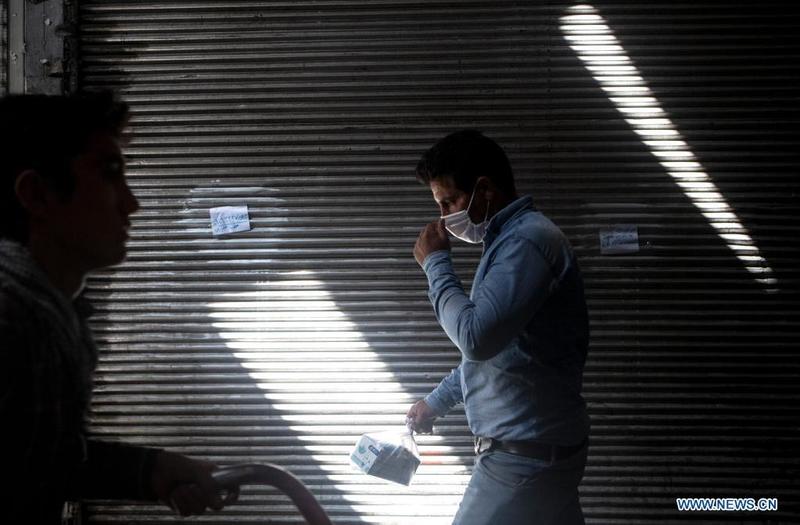 Tokyo found 421 new coronavirus cases, the most for a Sunday in two months. Japan will reimpose restrictions in the nation’s capital as well as Kyoto and Okinawa from Monday to try to rein in a rapid spread of infections in those areas.

The governor of Osaka prefecture in western Japan warned that he may need to ask the central government to declare a state of emergency if current measures to quell the coronavirus outbreak are deemed insufficient.

The effect of stricter measures imposed earlier this month could start emerging in the week of April 19, and authorities will decide then if an emergency declaration was needed, Governor Hirofumi Yoshimura said in a television program late Saturday. If declared, measures stronger than those taken during a state of emergency earlier this year would be required, he said.

Osaka, Japan’s third-largest prefecture by population with 8.81 million people, is seeing a steep rise in the number of infections, exceeding that of the capital Tokyo. It registered a daily record of 918 new virus cases on Saturday, compared with 570 in Tokyo.

The central government on April 5 designated Osaka, Hyogo and Miyagi prefectures as areas needing stricter measures to contain outbreaks. The government said on Friday that the quasi-state of emergency would be applied to Tokyo, Kyoto and Okinawa prefectures from Monday.
Laos

Laos reported two new COVID-19 cases, bringing the total number in the country to 51, according to Lao Ministry of Health on Sunday.

Director general of the National Center for Laboratory and Epidemiology under the Lao Ministry of Health, Phonepadith Xangsayarath, told a press conference here on Sunday that the two new cases include a 41-year-old businessman from Thailand, who had a close contact with illegal immigrants from Thailand on April 3.

Meanwhile, three more deaths and 284 more recoveries were reported, taking the nationwide counts to 27 and 9,159, respectively, the center said.

A full nationwide lockdown aimed at curbing the steep surge in local COVID-19 cases, took effect on Saturday and will last until April 25.

New Zealand reported three new cases of COVID-19 on Sunday, the Ministry of Health said in a statement.

The three infections were border-related cases involving recent returnees in managed isolation, while there was no new case in the wider New Zealand community, said the ministry.

The seven-day rolling average of new cases of COVID-19 detected at the New Zealand border was nine, it said.

New Zealand is currently at COVID-19 Alert Level 1 with no restrictions on gathering.

Pakistan reported 114 deaths in its latest data, the highest in almost five months. The South Asian nation’s third wave is picking up pace with more than 5,000 new infections found daily for the past four days.

Singapore's Ministry of Health (MOH) reported 32 new COVID-19 cases on Saturday, bringing the total confirmed cases in the country to 60,633.

Of the new cases, 31 are imported cases, and one is a community case.

South Korea will resume AstraZeneca Plc’s COVID-19 vaccine inoculations for those between the ages of 30 and 60 years as its health authorities balanced potential risks of the shots against a widening outbreak.

The Asian nation temporarily suspended the use of the vaccine for those below 60 last week after a 20-year-old health care worker was diagnosed with a blood clot shortly after getting an Astra dose. It followed similar blood clot reports elsewhere, prompting dozens of countries to limit Astra use.

“Those under 30 will be excluded from AstraZeneca vaccine shots,” the Korea Centers for Disease Control and Prevention said in a statement. “It is because we concluded that the benefit from getting vaccinated was not big compared with the risk of rare blood clot.”

South Korea reported 614 more cases of COVID-19 as of midnight Saturday compared to 24 hours ago, raising the total number of infections to 109,559.

The daily caseload was down from 677 the previous day, but it stayed above 600 for the fifth straight day.

The daily number of infections hovered in triple digits since Nov. 8 owing to small cluster infections in Seoul and its surrounding Gyeonggi province as well as imported cases.

Of the new cases, 211 were Seoul residents and 182 were people residing in Gyeonggi province.

Thailand reported 967 new COVID-19 cases, a record daily tally, with the total climbing to 32,625. Most of the cases are related to entertainment venue clusters from the nation’s capital, according to the Health Ministry.

The Philippines will ease the lockdown restrictions in Metro Manila and four adjacent provinces starting Monday despite the surge of COVID-19 infections, a government spokesman said on Sunday.

The new set of lockdown rules will be announced on Monday, said Roque.

The Philippines' Department of Health (DOH) reported on Sunday 11,681 new COVID-19 infections, bringing the total number of confirmed cases in the Southeast Asian country to 864,868.

Turkey on Saturday reported 52,676 new COVID-19 cases, including 2,497 symptomatic patients, as the total number of positive cases in the country reached 3,798,333, according to its health ministry.