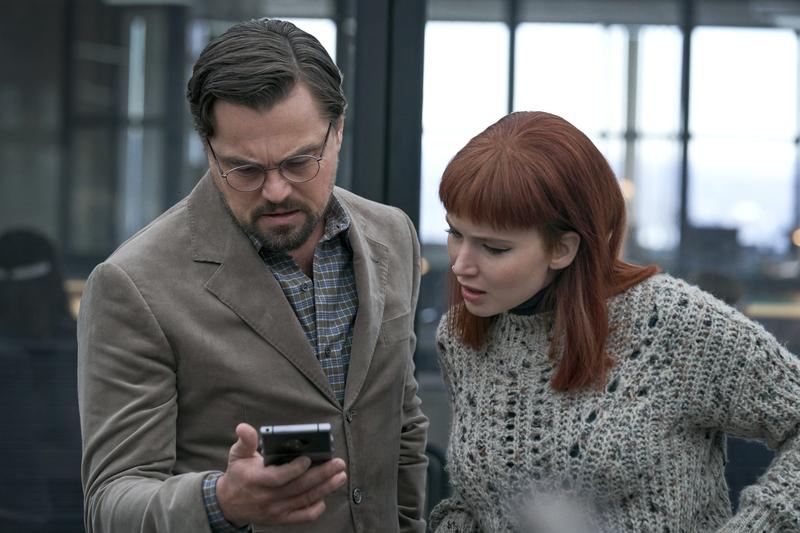 This image released by Netflix shows Leonardo DiCaprio (left) as Dr. Randall Mindy and Jennifer Lawrence (right) as Kate Dibiasky in a scene from Don't Look Up. (NIKO TAVERNISE / NETFLIX VIA AP)

Not because he got to work with a cast that includes Jennifer Lawrence, Cate Blanchett, Meryl Streep, Timothee Chalamet and Jonah Hill, to name just a few, but because the film captures the perils of climate change, while also making people laugh.

Leonardo DiCaprio said he'd been looking to do a film about the climate crisis for a while but finding the right approach had proved difficult, until now

"I think we all looked at this as an incredibly unique gift," said DiCaprio, one of Hollywood's most vocal campaigners on the environment.

"We'd been wanting to get the message out there about the climate crisis, and Adam (McKay) really cracked the code with creating this narrative," he said.

Released in movie theaters on Friday and on Netflix on Dec 24, Don't Look Up Now takes a satirical look at how the media and politicians treat climate issues. The plot sees two lowly astronomers (played by DiCaprio and Lawrence) trying to warn a world that doesn't seem to care about a huge comet on course to destroy the Earth in six months time.

DiCaprio said he'd been looking to do a film about the climate crisis for a while but finding the right approach had proved difficult, until now.

"You either do some existential journey through a person’s lifetime, or you make it a catastrophe movie where New York freezes over,” DiCaprio said.

Streep plays an egotistical US president, with Hill as her fawning son and chief adviser. Blanchett and Tyler Perry play breezy TV news anchors, Chalamet is a teen drop-out and Mark Rylance plays a bizarre tech billionaire with his own agenda.

Director Adam McKay said that while people may view the movie as taking a political stance "the big trick is that we want you to laugh."

DiCaprio said he was drawn to the film because he wanted to support scientists.

"I wanted to tip my hat to people who devote their lives to this issue, who know what they're talking about, and try to give them a little bit of a voice," he said.

The Oscar-winning actor called himself a "Debbie Downer" on the progress of efforts to address the climate crisis, but he added: "Hopefully films like this ... start to create different conversations, and more people talking about it will push the private sector and the powers that be to make massive changes.”