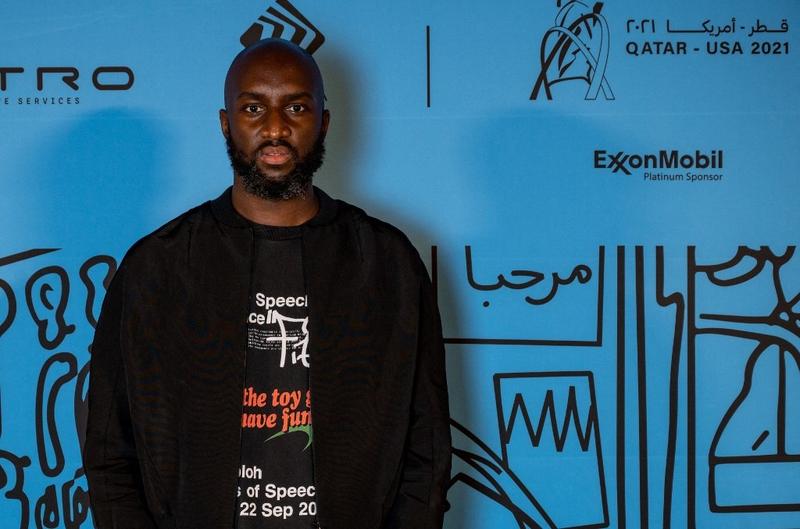 PARIS - Virgil Abloh, the American-born son of Ghanaian immigrants who became fashion's highest profile Black designer and the creative mind behind Louis Vuitton's menswear collections, died on Sunday at age 41, following a two-year battle with a rare form of cancer.

Abloh, who also worked as a DJ and visual artist, had been men's artistic director for Vuitton, the world's biggest luxury brand, since March 2018.

Abloh founded the Italian luxury streetwear label Off-White, in which LVMH took a 60 percent stake earlier this year. He was a former collaborator with rapper and fashion designer Ye, formerly known as Kanye West, who dedicated his latest Sunday Service to Abloh, according to billboard.com. 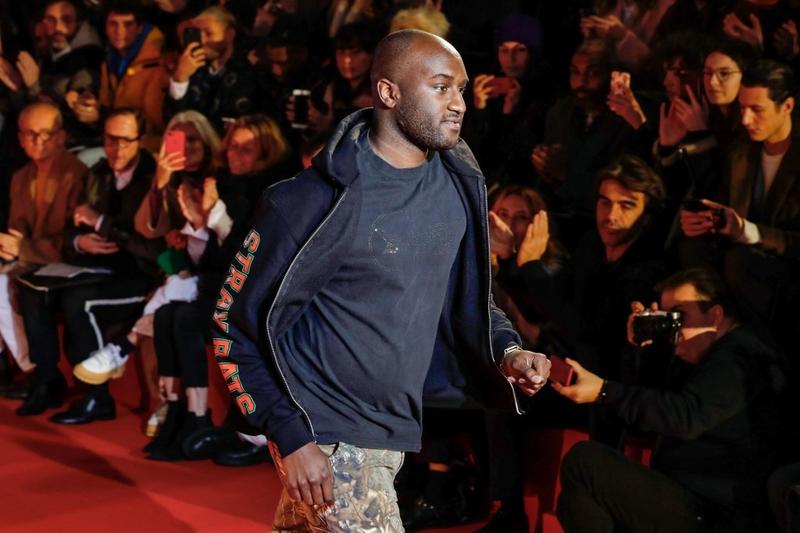 This file photo taken on Jan 17, 2018 shows US fashion designer Virgil Abloh acknowledging applause following the presentation of the men's Fall/Winter 2018/2019 collection he designed for Off White, in Paris. (FRANCOIS GUILLOT / AFP)

"Virgil was not only a genius designer, a visionary, he was also a man with a beautiful soul and great wisdom," Bernard Arnault, the billionaire boss of Luis Vuitton's owner, French fashion conglomerate LVMH, said in a statement Sunday.

Born in 1980 near Chicago, Abloh and his sister were raised in Rockford, Illinois. According to a 2018 Vogue magazine profile, his mother Eunice Abloh, a seamstress, taught him the basics of the craft at a young age. 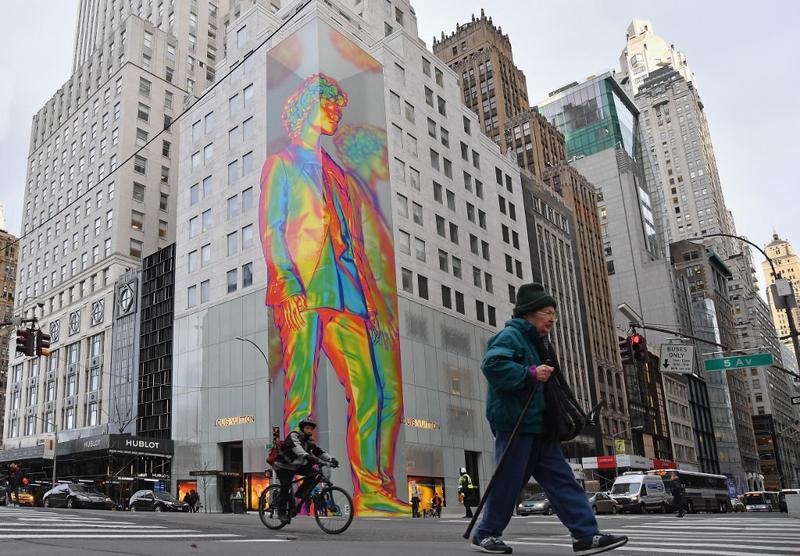 A 12-story art installation by Virgil Abloh is seen at the Louis Vuitton flagship store on Fifth Avenue in New York City on Jan 10, 2019, celebrating the Louis Vuitton Spring/Summer 2019 collection inspired by The Wizard of Oz. (ANGELA WEISS / AFP)

Virgil (Abloh) was not only a genius designer, a visionary, he was also a man with a beautiful soul and great wisdom.

After graduating from the University of Wisconsin-Madison, he completed a master's degree in architecture from the Illinois Institute of Technology. Abloh and Ye became interns at Fendi in Rome, and made the rounds at Paris Fashion Week. By 2010, Abloh worked as creative director for Ye's creative agency, Donda. He also designed album covers for Ye's Yeezus and My Beautiful Dark Twisted Fantasy.

His arrival at LVMH in 2018 marked the marriage between streetwear and high-end fashion, mixing sneakers and camouflage pants with tailored suits and evening gowns. His influences included graffiti art, hip hop and skateboard culture.

The style was embraced by the group as it sought to breathe new life into some labels and attract younger customers.

A prolific globe-trotter, Abloh generated buzz around products outside the world of fashion, ranging from Ikea door mats that read "Keep Off" to Moet & Chandon champagne bottles and Evian water.

Abloh eased up his pace slightly in 2019, citing health issues, and he was absent from an Off-White fashion show that year.

In July, LVMH expanded his role, giving him a mandate to launch new brands and partner with existing ones in a variety of sectors beyond fashion. For his label's first runway display in more than a year, as activities resumed in Paris following months of pandemic lockdowns, Abloh offered his audience a performance from British rapper Maya Arulpragasam, known as M.I.A, dancing with her on stage at the end.

Abloh drew on messages of inclusivity and gender-fluidity to expand the Louis Vuitton label's popularity, weaving themes of racial identity into his fashion shows with poetry performances and art installations.

With an eye to reaching Asian consumers grounded by the coronavirus pandemic, the designer sent his collections of colourful suits and utilitarian-flavoured outerwear off to Shanghai last summer, when many labels cancelled fashion shows. 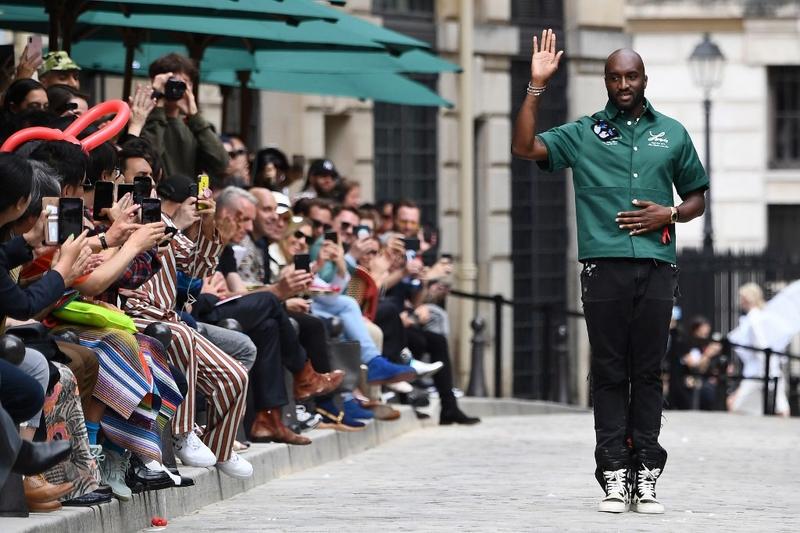 This file photo taken on June 20, 2019 shows US fashion designer Virgil Abloh acknowledging the audience at the end of the presentation of Louis Vuitton's creation during the men's spring/summer 2020 fashion collection in Paris. (ANNE-CHRISTINE POUJOULAT / AFP)

Virgil Abloh drew on messages of inclusivity and gender-fluidity to expand the Louis Vuitton label's popularity, weaving themes of racial identity into his fashion shows with poetry performances and art installations

Cameroonian handbag designer Wilglory Tanjong said on Instagram, "Virgil Abloh’s existence was so resounding that it paved the way for other Black designers like myself. And for that, I am forever grateful."

Abloh travelled to Doha weeks ago as the Qatar Museums unveiled Virgil Abloh: Figures of Speech, a mid-career retrospective. The exhibit was shown in 2019 at the Museum of Contemporary Art in Chicago.

READ MORE: At Hermès, a US$67 lipstick could hint at big ambitions

Abloh is survived by his wife, Sannon, his children Lowe and Grey, his sister, Edwina, and his parents, Nee and Eunice. According to The New York Times, Abloh died in Chicago.

"For over two years, Virgil valiantly battled a rare, aggressive form of cancer, cardiac angiosarcoma," said a message posted to his Instagram account. "He chose to endure his battle privately since his diagnosis in 2019, undergoing numerous challenging treatments, all while helming several significant institutions that span fashion, art, and culture."