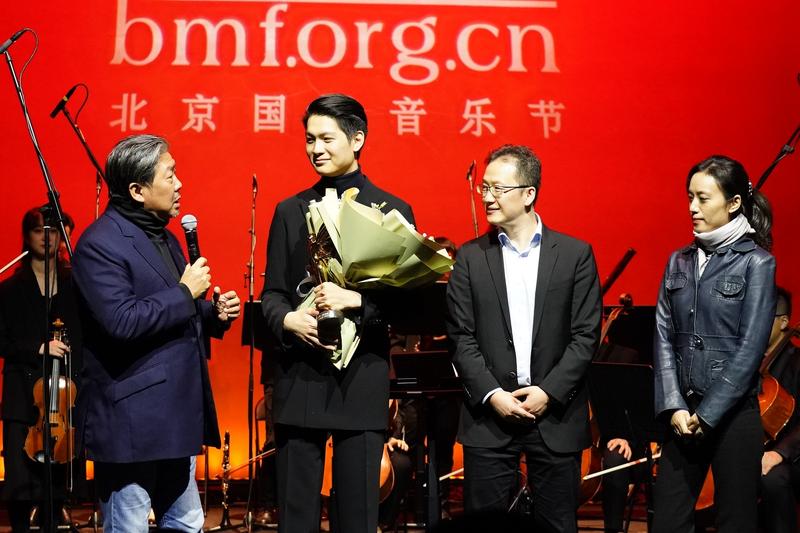 When he conducts, Jin Yukuang, standing in front of his band members, glows with confidence, enthusiasm and joy.

On Sunday, the 20-year-old conductor, along with young musicians of Novus-Classica Camerata, a dynamic chamber orchestra co-founded by Jin in 2020, made their debut in the capital with a concert held during the ongoing 24th Beijing Music Festival.

As part of the festival's lunchtime concert series, under the title Music at Noon, the concert opened with the first movement of Hungarian composer Zoltan Kodaly's Serenade, Op 12, and featured programs arranged for chamber music, including the second movement of Beethoven's String Trio Op 3, and Mozart's Divertimento K 136.

"We are happy to introduce ourselves to the audience in Beijing. We are an orchestra that has learned a lot from the tradition of classical music. We are also new, flexible, and open to evolving," Jin said before he ended the concert by leading the orchestra's performance of Summer from The Four Seasons by Vivaldi.

Jin, considered as one of the most promising young Chinese conductors, took home the runner-up prize at two major international conducting competitions in June－the 17th Khachaturian International Competition (Conducting), which was held in the Armenian capital of Yerevan, and the Only Stage International Conducting Competition－launched in January by Only Stage, a management company from the United Kingdom, in partnership with Classics Management Budapest. As the youngest contestant, and the only one born after 2000, Jin is the first Chinese to win an award in either competition. 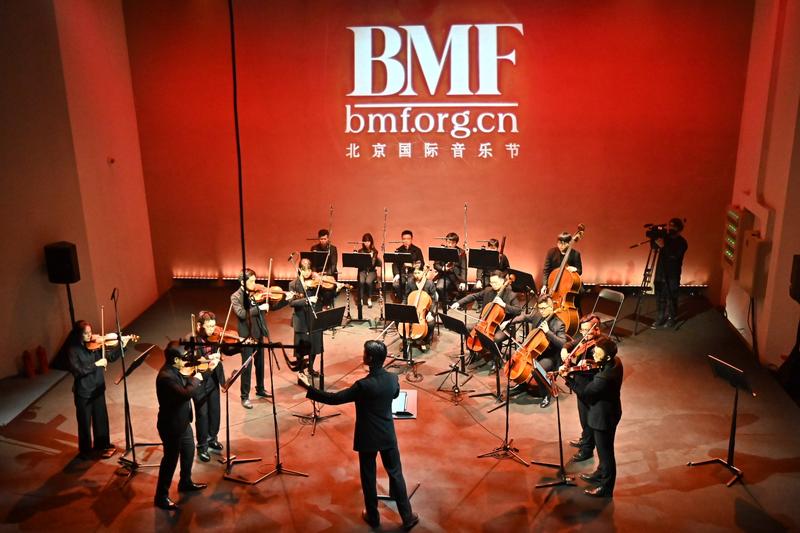 The chamber orchestra performs under Jin's baton in Sanlitun during the concert. (PHOTO PROVIDED TO CHINA DAILY)

During their trip to the capital, Jin and Novus-Classica Camerata also gave a concert on Monday, performing Transfigured Night by Austrian composer Arnold Schoenberg alongside the Chinese premiere of a rearrangement of four preludes and fugues from Bach's The Well-Tempered Clavier (Das Wohltemperierte Klavier), the last project of Russian composer Igor Stravinsky.

On Saturday, Jin and Novus-Classica Camerata will play two concerts for children, performing French composer Camille Saint-Saens' famous piece, The Carnival of the Animals, marking the 100th anniversary of the composer's death.

"I've been waiting for a long time to present such a young Chinese chamber music group like Novus-Classica Camerata. All the musicians are from the post-2000 generation, and they are eager to experiment with musical ideas through their performances, which respect tradition, but also embrace new possibilities," says Zou Shuang, artistic director of the Beijing Music Festival.

As one of the largest classical music events in the country, Beijing Music Festival, founded by conductor Yu Long in 1998, kicked off on Oct 9 and runs through Sunday.

"It's always been our wish to draw a new audience, especially to encourage the younger generation to enjoy classical music. With the performances by Novus-Classica Camerata, we are fulfilling that wish," Zou adds.

Jin, along with his classmates from the Shanghai Conservatory of Music, founded Novus-Classica Camerata when COVID-19 hit.

"About two years ago, I met Jin on campus one day and we talked about our studies and lives. We shared similar ideas, such as career plans. Both of us wanted to do something and the idea of launching a chamber music group came up," says 20-year-old violinist Li Bingzhang. 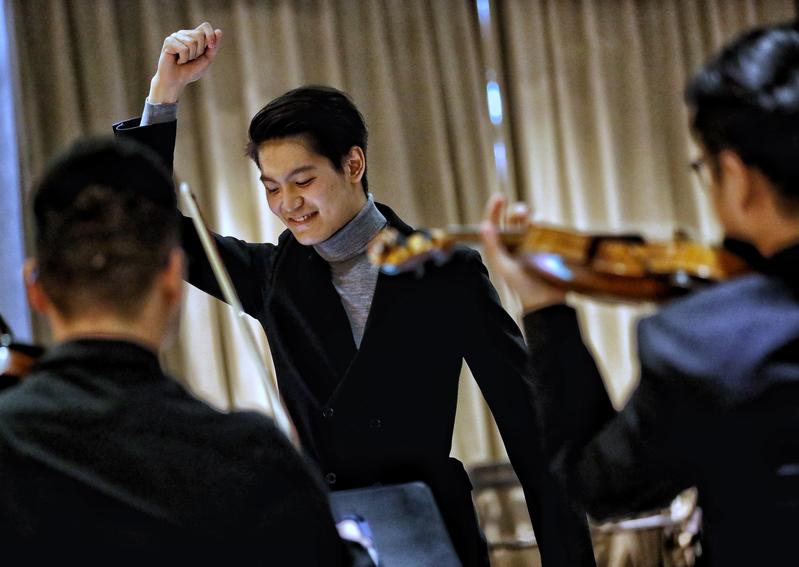 Born in Ningbo, Zhejiang province, Li started playing the violin at the age of 4.

After the pandemic hit, Jin and Li gathered 15 of their classmates and started to do rehearsals online. They also invited some overseas Chinese students and graduates of music schools, such as Curtis Institute of Music and Bard College Conservatory of Music, to join them.

They decided to try their best, Jin says, to bring some vitality to the music industry during the pandemic.

In December 2020, Novus-Classica Camerata was officially launched and since then, the ensemble has been active and regularly performing.

On Jan 8, Novus-Classica Camerata made its debut in Shanghai with a concert featuring music pieces by American composer Aaron Copland and Stravinsky. On May 16, they performed with violinist Ning Feng and cellist Chen Yibai at Yellow Lounge, a global classical music club initiative by Deutsche Grammophon, in Shanghai. On July 23, they appeared at Shanghai's Music in the Summer Air festival, bringing five Chinese premieres, including duet for two violins by American composer Steve Reich, concerto for harpsichord and string orchestra by Polish composer Henryk Gorecki, and violin concerto Lonely Angel by Latvian composer Peteris Vasks.

According to Jin, Novus-Classica Camerata's repertoire ranges from the Baroque period to contemporary works, showing its flexibility in crossing musical boundaries and a pioneering spirit.

"We want to bring music pieces that are rarely performed in China and are challenging for chamber music groups," says Jin, adding that he discusses the program for each concert with band members, allowing it to be diversified. 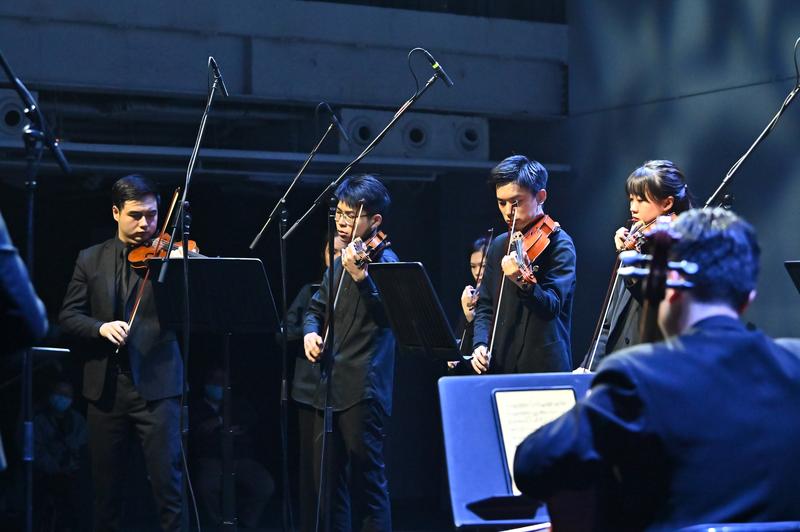 Some members of Novus-Classica Camerata perform during the event. (PHOTO PROVIDED TO CHINA DAILY)

Born and raised in Hangzhou, Zhejiang, Jin learned to play the piano at the age of 4. He recalls that the piano was bought even before he was born. His father, who works with a publishing company in Hangzhou, wanted to learn the instrument, himself. Though the father didn't fulfill his dream, he wants his son to enjoy playing music.

Jin developed his passion for conducting after joining a children's chorus as a teenager. A conductor with the chorus offered Jin the chance to try his hand, which enabled him to take the baton for the first time at age 14.

In 2015, Jin was admitted to the high school affiliated to the Shanghai Conservatory of Music and is now a student there, majoring in conducting. During his study, Jin has been mentored by renowned conductors like Jorma Panula, Andres Orozco-Estrada and Jukka-Pekka Saraste, as well as Chinese conductors, including Zhang Guoyong and Yu Long.

Jin refers to conductor Yu as "a talent scout", who has promoted Novus-Classica Camerata since finding out about the group.

In September, with musicians born after 2000, Yu and the Shanghai Symphony Orchestra kicked off the Project Spring Bird music season at the Blackstone Music Plus hotel in Shanghai, with a goal of showcasing the passion and creativity of young Chinese musicians.

The opening concert featured 17-year-old pianist Wang Yalun and Novus-Classica Camerata, under the baton of Jin.

During the music season, which lasts through next May, the young musicians are also involved in its organization, including that of repertoires.

"For young musicians, growth takes not only time, but is also a starting point to a bigger stage," Yu said in an earlier interview. "We want to help them cross the barriers and explore their artistic passion."