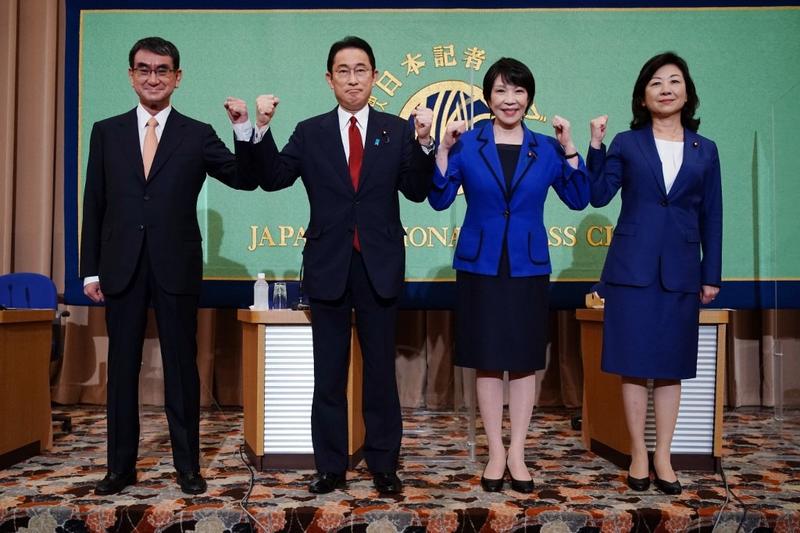 TOKYO - The four candidates for the presidential election of Japan's ruling Liberal Democratic Party (LDP) all vowed on Wednesday to double the budget for children if they could win the race, as the country seeks to resolve the persistently low birth rate problem.

The LDP's presidential election is expected to effectively decide the next prime minister succeeding the incumbent Yoshihide Suga, as the LDP controls the powerful lower house of parliament.

Three of the candidates, namely former foreign minister Fumio Kishida, vaccination minister Taro Kono and LDP executive acting secretary general Seiko Noda, agreed on the need of setting up an agency sought by Suga to lead children's policy at a debate before the Sept. 29 race.

Former communications minister Sanae Takaichi said via a video message that she will "consider creating an organization for effectively promoting children's policies," not mentioning the institution suggested by Suga.

In the debate, Kono said he will lower child suicides, deaths from abuse and poverty of children to zero.

Takaichi said she will reduce the burden of childrearing by offering tax reliefs for users of babysitters.

Kishida said that he will think about appointing a minister responsible for the envisaged children's agency.

Other candidates agreed with Kishida, while Noda said she will pursue to submit bills to create the agency during next year's regular Diet session.

Suga has been trying to establish an agency for children to coordinate children's policies on medical and educational services and those handled by police.

To realize the plan, Suga's government has formed a group to consider the establishment of the agency, and is seeking to prepare a basic plan for it by the end of the year.

Details such as the time of launching the plan, its authority and its scale have yet to be determined, and are left to the government under a new leader to finalize the decisions.

Japan has ranked low in terms of public expenditures on child education among Organization for Economic Cooperation and Development (OECD) countries, with its child poverty rate staying higher than the average of OECD members.