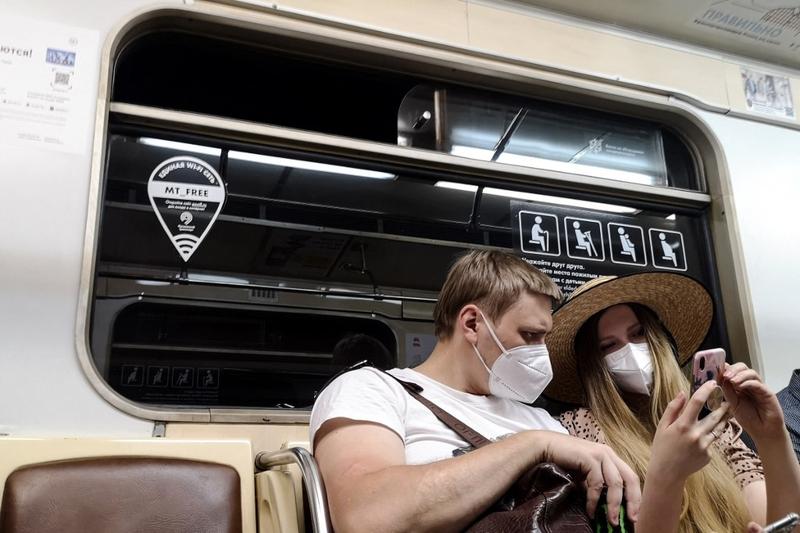 A couple wearing a face mask amid the ongoing COVID-19 pandemic sit in a subway car in Moscow on August 16, 2021. (KIRILL KUDRYAVTSEV / AFP)

The number of excess deaths, which some epidemiologists say is the best way to measure the death toll during a pandemic, reached 528,000 in July, Rosstat data showed.

Brown, who is a United Nations special envoy, called on US President Joe Biden and other Group of Seven leaders to urgently ship vaccines from warehouses in America and Europe to Africa.

Western countries are hoarding nearly 300 million shots while only 70 million people in Africa have so far been vaccinated, Brown said in an opinion piece published in the Sunday Mirror newspaper, citing research by data firm Airfinity.

By Christmas, the West is set to have 1 billion surplus doses even if every European and American adult has received a booster shot and all children over 12 are injected, he said.

"We are in a new 'arms' race - to get vaccines into people as quickly as possible - but this is an arms race where the West have a stranglehold on the vaccine supplies," Brown said.

The grip of rich countries on vaccine stocks was stopping Covax, the international facility for buying vaccines, from meeting its promise to send 2 billion vaccines to poorer countries this year, he added. 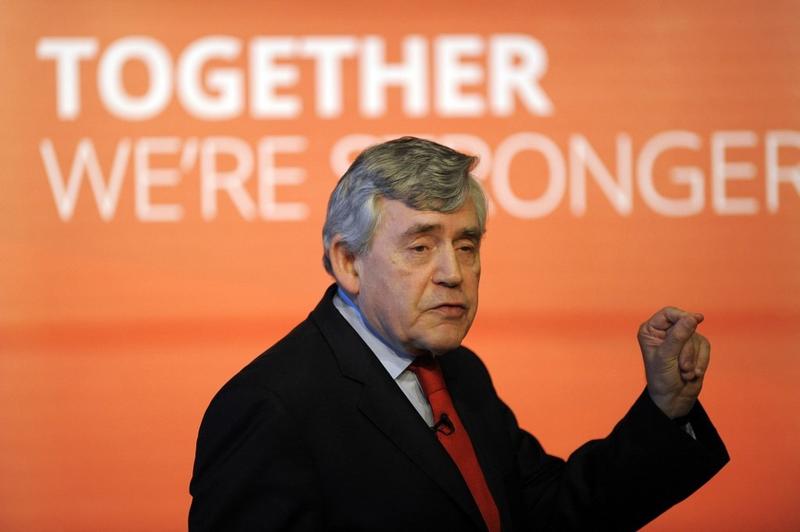 In his file photo, former Labour Party Prime Minister Gordon Brown speaks at a Scottish Labour Campaign event at the Adam Smith Theatre in Kirkcaldy, north of Edinburgh in Scotland on May 13, 2017. (ANDY BUCHANAN / AFP)

The stockpiling has also delayed dose-sharing by G7 countries with Africa and low-income countries, Brown said.

The US, Britain, European nations and others could satisfy their own needs -- vaccinating about 80 percent of their populations over the age of 12 and moving ahead with booster programs -- and still have large quantities to redistribute globally, according to Airfinity.

Those governments have so far delivered a meager amount of the supplies they’ve pledged to poorer countries as some move forward with plans for booster shots in a race to combat the delta variant. Health advocates worry that the slow pace will prolong the pandemic and increase the risk more worrisome variants will emerge. Some are also calling for more transparency on the agreements between governments and manufacturers.

“There needs to be an urgent global reckoning,” said Fatima Hassan, founder and director of the Health Justice Initiative, a non-profit in Cape Town. “We need to divert doses to those in need and open all the contracts.”

An independent review of the international COVID-19 response earlier this year urged high-income nations to provide more than 2 billion doses to poorer regions by mid-2022. Of the more than 1 billion doses Group of Seven countries and the EU have pledged, less than 15 percent has been delivered, Airfinity found.

The issue is often seen as a choice between going ahead with booster campaigns at home or reallocating doses abroad, Rasmus Bech Hansen, the company’s chief executive officer, said in an interview.

“Our data is showing it’s a false dichotomy,” he said. “You can do both.”

Global output is rising steadily, and disruption seems unlikely, he said. Production could cross 12 billion doses by the end of the year, Airfinity estimates. That’s more than the roughly 11 billion required to vaccinate the world.

Western countries have about 500 million doses available to be redistributed today, some of that already donated, with that number rising to about 2.2 billion by the middle of 2022, the analysis shows. The Pfizer Inc and BioNTech SE vaccine accounts for about 45 percent of the available shots that could be redistributed, while Moderna Inc’s makes up roughly a quarter of the total, according to Airfinity. 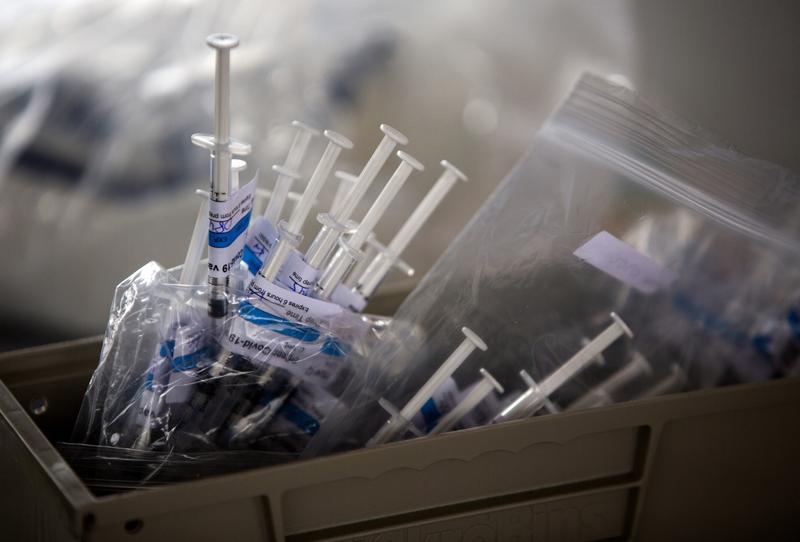 Doses of the Pfizer-BioNTech Covid-19 vaccine at the Oregon Health & Science University mass vaccination site at Portland International Airport in Portland, Oregon, US, on May 17, 2021. (ALISHA JUCEVIC / BLOOMBERG)

Many lower-income nations are relying on Covax, an initiative led by groups including the World Health Organization that’s designed to provide fair access to the shots for every country, but the program has fallen short of its targets. COVID-19 booster plans should be postponed until more shots are distributed to countries where they’re scarce, WHO Director-General Tedros Adhanom Ghebreyesus has said.

Algeria on Saturday launched a wide vaccination campaign against COVID-19 aiming at reaching herd immunity as soon as possible by vaccinating the largest number of people.

This national campaign aims at vaccinating "at least 70 percent of the adult population by the end of 2021," said Health Minister Abderrahman Benbouzid, specifying that people aged under 18 should also be protected because they are increasingly affected by the Delta variant of COVID-19.

Once the goal of this campaign is achieved, the level of danger caused by the pandemic as well as the pressure on hospitals and the nursing staff would decrease, he added.

Algerian health authorities on Saturday reported 351 new COVID-19 cases and 26 fatalities in the past 24 hours, taking the total infections to 197,659 since the outbreak of the pandemic in February 2020.

Ethiopian Airlines, national carrier of the East African country, announced on Saturday that it has transported over 50 million doses of vaccine to more than 28 countries across the globe.

With its technologically equipped facility called "Pharma Wing," the airliner said it has successfully shipped the doses to different countries, thereby becoming the only African carrier to achieve such a milestone.

Being at the forefront of the battle against COVID-19, Ethiopian Airlines has transported the most needed medical supplies to over 80 countries since the outbreak, according to a statement from the carrier on Saturday.

As one of the airlines that did not quit operation amid border closures and travel restrictions by countries due to the pandemic, Ethiopian has reunited more than 63,000 stranded citizens of different countries with their families and loved ones, according to the statement.

"I am very much delighted to see such a great humanitarian achievement due to our concerted and determined lifesaving efforts," Tewolde GebreMariam, Group CEO of Ethiopian Airlines, said, reiterating the crucial role played by the company during this difficult time.

"Ethiopian Airlines has played its irreplaceable role in responding to the dire need of the global cargo transportation amidst the pandemic," he said. "By this, the Airline has proved to be the pioneer and an epitome of continental and global solidarity."

With its seventy-five years of operation, Ethiopian Airlines is the fastest growing airline in Africa, and it has become one of the continent's leading carriers.

Hawaii is running out of oxygen and may have to ration care after COVID-19 hospitalizations reached a record, the Honolulu Star Advertiser reported. With field hospitals being erected and federally supplied health-care workers deployed, the state could run short of oxygen as soon as Monday, the newspaper reported.

The Delta variant has pushed infections to the highest point of the pandemic. Almost 6,300 weekly cases were reported on Friday, more than triple the level of the end of July.

The UK is considering a requirement for vaccine passports to be shown in order to access large venues as early as this month, but has yet to decide whether to roll out jabs to healthy schoolchildren.

“We are looking at, by the end of September when everyone has had a chance to be fully vaccinated, for the large venues -- venues which could end up causing a real spike in infections -- where we need to use the certification process,” vaccines minister Nadhim Zahawi said in an interview with Sky News.

The government hasn’t yet decided on whether to roll out vaccines to healthy 12- to 15-year-olds, but if the move does go ahead, then parental consent would be needed, he said.

On Friday, the Joint Committee on Vaccination and Immunisation said that the benefits of vaccination for healthy children in this age group was “marginally greater” than the potential known harms, though advised the government to ask the U.K.’s chief medical officers to weigh in on the decision.

Zahawi confirmed that the government is considering requiring all frontline healthcare staff to have the COVID-19 vaccine, after the Sunday Telegraph reported that Health Secretary Sajid Javid is pushing ahead with the plans. The government will carry out a consultation before making a decision, Zahawi said.

He alluded to the need for a post-virus re-balancing amid reports Prime Minister Boris Johnson is preparing to raise national insurance in order to fund a reform of the UK’s social care system.

“The safety net this government has provided is one people recognize,” he said. “It’s only right that we try and make sure we return the system to where it was.”

He said the government will reveal the details of its social care plan by the end of the year.

Britain has reported 37,578 new cases of COVID-19, government data showed on Saturday, meaning cases reported between Aug 29 and Sept 4 were up 2.4 percent compared with the previous seven days. 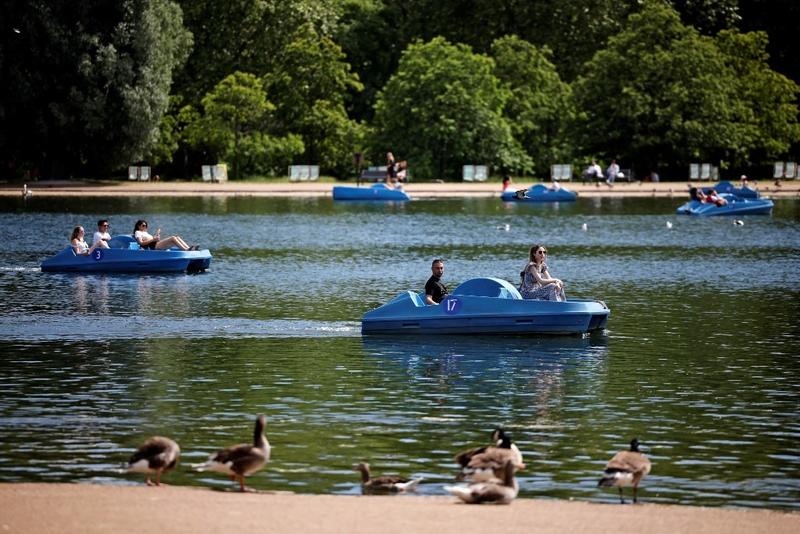 People ride in a pedalo on the Serpentine lake in the sunshine in Hyde Park in London on June 14, 2021. (TOLGA AKMEN / AFP)

A further 120 people were reported as having died within 28 days of a positive test for COVID-19, leaving the seven-day total unchanged from the previous week.

Zambia has acquired more COVID-19 vaccines as part of efforts to ramp up its vaccination program, a government official said on Saturday.

The 4,400,000 doses of the Johnson & Johnson COVID-19 vaccine have been acquired under the African Vaccine Acquisition Trust, an initiative of the African Union (AU).

Kennedy Malama, Permanent Secretary in charge of Technical Services in the Ministry of Health said the government has approved the procurement of the vaccines under the AU initiative as part of continued efforts to build vaccine stockpiles.

He said the country will receive the first consignment of 129,600 doses under the AU facility next week.

Zambia launched its vaccination program in April as one of the pillars to fight the pandemic, with five vaccines approved for use in the southern African nation.

Meanwhile, the official said the ministry was prioritizing genomic sequencing for robust surveillance to rapidly detect the presence of mutating COVID-19 variants as the country was at risk of importing the mutated variants.

He said in a release that the government has also ramped up scientific investigations and local research that will be crucial to documenting the country's response efforts and informing decision-making.