UK panel does not recommend virus shots for healthy youths 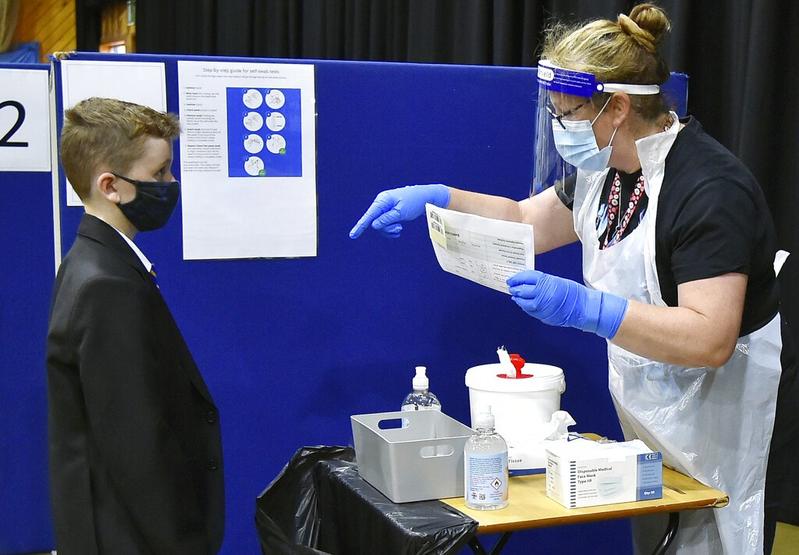 A boy at COVID-19 test station as he entered his new secondary school for the first time at Wales High school, Sheffield, England, Sept 3, 2021. (RUI VIEIRA/AP)

LONDON/OTTAWA/CALGARY/ JOHANNESBURG - Britain's vaccine advisers said they were not recommending the vaccination of all 12- to 15-year-olds against COVID-19, preferring a precautionary approach in healthy children due to a rare side effect of heart inflammation.

The advice could see Britain pursue a different approach to the United States, Israel and some European countries, which have rolled out vaccinations to children more broadly.

However a final decision has not been taken, as the British government said it would consult medical advisers to look at other factors, such as disruption to schools.

READ MORE: WHO calls for moratorium on COVID-19 booster doses

Britain has reported more than 133,000 deaths from COVID-19 and nearly 7 million cases, and while transmission among children can be high, they are rarely severely ill from the disease.

The Joint Committee on Vaccination and Immunisation (JCVI) on Friday said children with underlying conditions that made them more at risk from COVID-19 should get vaccinated.

For healthy children, there was still a small benefit from receiving COVID-19 vaccination, and advisers said the risk-benefit was "finely balanced".

However, the JCVI said it wanted more information on the long-term effects of rare reports of heart inflammation, known as myocarditis, in young people following vaccination with Pfizer's shot.

Myocarditis is rare and normally mild, with patients usually recovering in a few days.

New modeling shows an "urgent need" to get more young adults in Canada vaccinated as the country fights a fourth wave of COVID-19 infections driven by the Delta variant, the public health agency said on Friday.

At the current rate of vaccination, new COVID-19 cases could surge past the peak of Canada's third wave and could exceed hospital capacity within months, the Public Health Agency of Canada (PHAC) said.

The modeling showed a need to speed up the overall rate of vaccinations, particularly for the 18-39 age group, to reduce the impact of the Delta resurgence, PHAC said in a presentation.

Europe's medicines regulator said on Friday it was reviewing if COVID-19 vaccines caused a risk of a rare inflammatory condition, following a report of a case with Pfizer/BioNTech's shot.

The safety panel of the European Medicines Agency is looking into Multisystem Inflammatory Syndrome (MIS) after the condition was reported in a 17-year-old male in Denmark, the agency said.

The teenager has fully recovered. This condition has also been reported after some other COVID-19 vaccines, the regulator said.

MIS has also been previously reported in people following the COVID-19 infection, the agency said. However, the Danish teen had no such history.

The syndrome is a serious but rare condition in which different body parts become inflamed, including the heart, lungs, kidneys, brain, skin, eyes, or gastrointestinal organs.

As employers were introducing mandatory vaccines in the workplace, South Africa's largest labor federation on Friday said it has received hundreds and thousands of complaints from workers who have been "coerced" to vaccinate at work.

"The temptation from the private sector is that people must be bullied into submission which is not surprising," Congress of South African Trade Unions (Cosatu) spokesperson Sizwe Pamla told Xinhua.

Pamla said it came as no surprise when companies announced "mandatory vaccination policy," some employees have been "threatened" with dismissals and suspensions without vaccinations. He suggested "dialogue", not "coercion," should be used to deal with it.

The current seven-day moving average of daily new cases in the United States was over 150,000, up 4.9 percent from the previous week, according to the latest weekly report by the US Centers for Disease Control and Prevention (CDC).

Kids were much more likely to be hospitalized as the Delta variant became widespread, two studies from the US Centers for Disease Control and Prevention released Friday found. But children did not appear to contract more serious illness, requiring intensive care, for example, than in previous viral surges.

The share of hospitalized young people who had indications of more serious illness remained similar to earlier in the year and in 2020, the studies found. Though vaccine access has opened up to more young people, children under age 12 don’t currently qualify for shots.